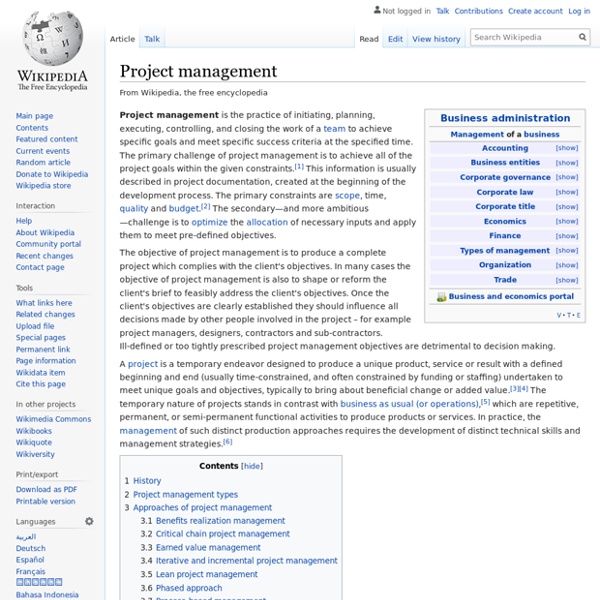 A Brief History of Project Management | Project Smart By Duncan Haughey, PMP | 2 Jan 2010 | updated 21 Apr 2013 In this history of project management, I chart all the major developments and events in the discipline as far back as there are records. Although there has been some form of project management since early civilisation, project management in the modern sense began in the 1950s. 2570 BC: The Great Pyramid of Giza Completed The Pharaohs built the pyramids and today archaeologists still argue about how they achieved this feat. 208 BC: Construction of the Great Wall of China Later still, another of the Seven Wonders of the World was built. 1917: The Gantt chart Developed by Henry Gantt (1861-1919) One of the forefathers of project management, Henry Gantt is best-known for creating his self-named scheduling diagram, the Gantt chart. 1956: The American Association of Cost Engineers (now AACE International) Formed 1957: The Critical Path Method (CPM) Invented by the Dupont Corporation 1975: PROMPTII Method Created by Simpact Systems Limited

Social software Social software Or Web 2.0 applications, also known as social apps, include communication tools and interactive tools often based on the Internet. Communication tools typically handle the capturing, storing and presentation of communication, usually written but increasingly including audio and video as well. Interactive tools handle mediated interactions between a pair or group of users. Types[edit] Instant messaging[edit] One can add friends to a contact or buddy list by entering the person's email address or messenger ID. Text chat[edit] Internet Relay Chat (IRC) and other online chat technologies allow users to join and communicate with many people at once, publicly. Collaborative software[edit] The goal of collaborative software, also known as groupware, such as Moodle, Landing pages, Enterprise Architecture, and Sharepoint, is to allow subjects to share data – such as files, photos, text, etc. for the purpose of project work or school work. Internet forums[edit] Wikis[edit] Blogs[edit]

Online proofing Online proofing is the process undertaken by web designers, photographers, marketing agencies and video production companies, among others, to automate the review and approval of work online. Traditionally a process used by photographers, as more work is done online and teams work remotely this method of working allows people to collaboratively work together to speed up the design process and keep an online audit trail. Online proofing has also become widespread in the e-commerce industry. With the growing capabilities of the internet, companies who allow their customers to design and customize a product on their website have adopted the online proofing process as an effective quality assurance method. Online proofing saves time in the purchasing process and improves customer buying experience and raises customer satisfaction.[1] References[edit] See also[edit]

The Ur and Harran Latitudes, and Göbekli Tepe NEWS: "... latitude at Harran equals 3/4 atan and at Ur 3/5 atan ..." 2008.04.25 - When is a "moon temple" an observatory? Recent press reports called my attention to Göbekli Tepe in Turkey (Göbekli Tepe - An Introduction). A flurry of news and media has followed the Jan. 18 Göbekli Tepe article in Science, 319:5861. Location = 37.224 N., 38.922 E. Since 1994, archaeologist Klaus Schmidt has excavated at the Göbekli Tepe stone circles, circles 7,000 years older than Stonehenge. None of us, not even archaeos, needs an excuse for being unfamiliar with such early Neolithic megalithic monuments; their existence is still big news. Harran is renowned as a Sabaean center associated with a moon "temple" and as an earlier Sumerian center. At this point the Old World had captured my attention once again, distracting from great pueblo geometry near the same latitude. Summarizing, colatitude at Harran equals 4/3 atan and at Ur 5/3 atan. Mesopotamia Placemarks KML text file.

Social bookmarking Common features[edit] In a social bookmarking system, users save links to web pages that they want to remember and/or share. These bookmarks are usually public, and can be saved privately, shared only with specified people or groups, shared only inside certain networks, or another combination of public and private domains. The allowed people can usually view these bookmarks chronologically, by category or tags, or via a search engine. Many social bookmarking services provide web feeds for their lists of bookmarks, including lists organized by tags. As these services have matured and grown more popular, they have added extra features such as ratings and comments on bookmarks, the ability to import and export bookmarks from browsers, emailing of bookmarks, web annotation, and groups or other social network features.[4] History[edit] A user page on del.icio.us in May 2004, displaying bookmarks with tags. Folksonomy[edit] Uses[edit] Enterprise bookmarking[edit] Libraries[edit] Education[edit]

Göbekli Tepe: 12,000 Years Old Temple The site is currently undergoing excavation by German and Turkish archaeologists. II. Dating the temple Circles of limestone columns weighing from 7 to 15 tons or more have been excavated in Göbekli Tepe, Turkey, about 6 miles northeast of Urfa. If you want to know a lot about the pyramids of Giza, please follow THIS link. III. Forty standing T-shaped columns have been uncovered so far, grouped in four circles of 98 feet (30 meters) in diameter. The temple is composed of repeating circles and this is the first thing that caught my eye! Above: Graphic reconstruction of the Göbekli Tepe circular arrangement;Bellow: Google Earth pictures of the 200,000 years old African Metropolis;Red: showing groups of circular buildings of 3 and more ;Blue: showing groups of 3, 2 and single individual buildings;Orange: showing groups of larger circular buildings that are connected; Above: Stacked rocks forming walls - African Metropolis; Bellow: Stacked rocks forming walls - Göbekli Tepe; IV. 1. 2. 4. V.

Göbekli Tepe By Charles C. Mann Photograph by Vincent J. Every now and then the dawn of civilization is reenacted on a remote hilltop in southern Turkey. The reenactors are busloads of tourists—usually Turkish, sometimes European. Before them are dozens of massive stone pillars arranged into a set of rings, one mashed up against the next. At the time of Göbekli Tepe's construction much of the human race lived in small nomadic bands that survived by foraging for plants and hunting wild animals. Archaeologists are still excavating Göbekli Tepe and debating its meaning. At first the Neolithic Revolution was viewed as a single event—a sudden flash of genius—that occurred in a single location, Mesopotamia, between the Tigris and Euphrates Rivers in what is now southern Iraq, then spread to India, Europe, and beyond. After a moment of stunned quiet, tourists at the site busily snap pictures with cameras and cell phones. Inches below the surface the team struck an elaborately fashioned stone.

Millau Viaduct The Millau Viaduct (French: le Viaduc de Millau, IPA: [vjadyk də mijo]) is a cable-stayed bridge that spans the valley of the River Tarn near Millau in southern France. History[edit] Problems with traffic on the route from Paris to Spain along the stretch passing through the Tarn valley near the town of Millau, during the summer when the roads became jammed with holiday traffic, required construction of a bridge to span the valley.[10] The first plans were discussed in 1987 by CETE, and by October 1991, the decision was made to build a high crossing of the Tarn River by a structure of around 2,500 m (8,200 ft). During 1993–1994 the government consulted with seven architects and eight structural engineers. During 1995–1996, a second definition study was made by five associated architect groups and structural engineers. In July 1996, the jury decided in favour of a cable-stayed design with multiple spans, as proposed by the Sogelerg consortium (Michel Virlogeux and Norman Foster). Timeline

Bluestonehenge "Bluestonehenge" or "Bluehenge" is a prehistoric henge and stone circle monument that was discovered by the Stonehenge Riverside Project about 1 mile (1.6 km) south-east of Stonehenge in Wiltshire , England . All that currently remains of the site is the ditch of the henge and a series of stone settings, none of which is visible above ground. The site was excavated in August 2008 and again in August 2009 and is considered to be an important find by archaeologists . [ 1 ] Full details of the discovery were published in the 2010 January / February edition of British Archaeology . [ 2 ] Initial findings [ edit ] Bluestonehenge digital reconstruction - oval configuration. The monument has been tentatively dated to between about 3000 and 2400 BC, although radiocarbon dating of antler tools found at the site has only provided an approximate date of 2469 to 2286 BC for the dismantling of the stones. Context [ edit ] The henge is located beside the River Avon in West Amesbury . See also [ edit ]

Project management is a body of knowledge comprising methods, processes, tools, techniques and skills that help to manage, predict and control the outcomes of a project.

Project management is a core competence and a transferable life skill. by raviii Jun 10