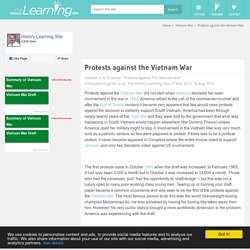 America rallied to the call of the commander-in-chief and after the Gulf of Tonkin incident it became very apparent that few would raise protests against the decision to militarily support South Vietnam. America had been through nearly twenty years of the Cold War and they were told by the government that what was happening in South Vietnam would happen elsewhere (the Domino Theory) unless America used her military might to stop it.

Involvement in the Vietnam War was very much sold as a patriotic venture so few were prepared to protest. If there was to be a political protest, it never became apparent in Congress where the entire House voted to support Johnson and only two Senators voted against US involvement. Domino Theory - The Vietnam War. Domino Theory came from the notion of “containment” that governed American foreign policy from late 1940s until 1980s. 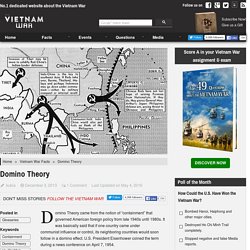 It was basically said that if one country came under communist influence or control, its neighboring countries would soon follow in a domino effect. U.S. President Eisenhower coined the term during a news conference on April 7, 1954. Vietnam War protests - The Vietnam War. Movements and protests against the U.S. involvement in the Vietnam War started small mostly among the pacifist and leftists in campus “teach-ins” but then began in earnest in 1965 after the U.S. started regular bombings against North Vietnam. 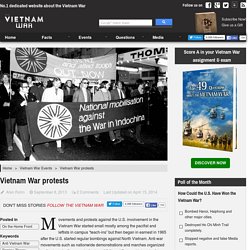 Anti-war movements such as nationwide demonstrations and marches organized by Students for Democratic Society (SDS) and Furman University Corps of Kazoos (FUCK) attracted huge public support and worldwide attention over the next 3 years, peaking in early 1968 after the Tet Offensive which proved the end of the war was nowhere in sight and remaining influential until the end of the conflict in 1973. The Beginning. Vietnam war protest. The Time Obama Was Decidedly Against 'Dumb Wars' While the debate over Syria and whether to pursue military action is still ongoing, this 2007 clip highlighting a 2002 speech by then-Illinois state Sen. 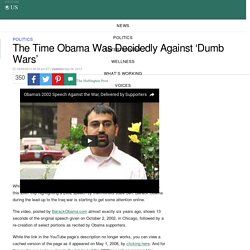 Barack Obama during the lead-up to the Iraq war is starting to get some attention online. The video, posted by BarackObama.com almost exactly six years ago, shows 13 seconds of the original speech given on October 2, 2002, in Chicago, followed by a re-creation of select portions as recited by Obama supporters. Martin Luther King, Jr. I Have A Dream Speech. Dear Dr. Spock: Letters about the Vietnam War to America's Favorite Baby Doctor. "Bring them home" by Pete Seeger. 1969: Millions march in US Vietnam Moratorium. 1969: Millions march in US Vietnam Moratorium Americans have taken part in peace initiatives across the United States to protest against the continuing war in Vietnam. 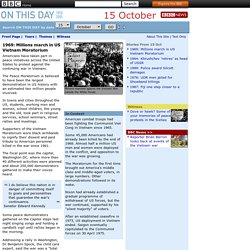 The Peace Moratorium is believed to have been the largest demonstration in US history with an estimated two million people involved. In towns and cities throughout the US, students, working men and women, school children, the young and the old, took part in religious services, school seminars, street rallies and meetings. Supporters of the Vietnam Moratorium wore black armbands to signify their dissent and paid tribute to American personnel killed in the war since 1961. The focal point was the capital, Washington DC, where more than 40 different activities were planned and about 250,000 demonstrators gathered to make their voices heard. RESS LGT cycle terminal LV anglais sujets etudes 230676.