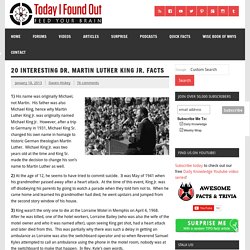 His father was also Michael King, hence why Martin Luther King Jr. was originally named Michael King Jr. However, after a trip to Germany in 1931, Michael King Sr. changed his own name in homage to historic German theologian Martin Luther. Michael King Jr. was two years old at the time and King Sr. made the decision to change his son’s name to Martin Luther as well. 2) At the age of 12, he seems to have tried to commit suicide. It was May of 1941 when his grandmother passed away after a heart attack. 3) King wasn’t the only one to die at the Lorraine Motel in Memphis on April 4, 1968. I ran into the room and picked up the phone to call an operator or to call an ambulance. 4) Also on the day King was killed, he was out on the balcony for a smoke. 5) Martin Luther King Jr. was nearly assassinated a decade earlier than his ultimate death. 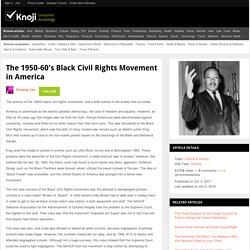 America is advertised as the world's greatest democracy, the land of freedom and equality. However, as little as 40 years ago this slogan was far from the truth. African-Americans were discriminated against constantly, tortured and killed for no other reason than their skin color. This was the period of the Black Civil Rights movement, which saw the birth of many modern-day heroes such as Martin Luther King. MLK was looked up to due to his non-violent protest based on the teachings of the Bible and Mahatma Gandhi. King used the media to protest in events such as Little Rock, sit-ins and in Birmingham 1963. The first real success of the Black Civil Rights movement was the attempt to desegregate primary schools in a case called "Brown vs. The case was won, and Linda was allowed to attend all white schools, because segregation of primary schools was made illegal. Pixabay.

Black History & Civil Rights Movement Timeline. Malcolm X Malcolm X, black nationalist and founder of the Organization of Afro-American Unity, is assassinated (Feb. 21). State troopers violently attack peaceful demonstrators led by Rev. Martin Luther King, Jr., as they try to cross the Pettus Bridge in Selma, Ala. Fifty marchers are hospitalized on "Bloody Sunday," after police use tear gas, whips, and clubs against them. The march is considered the catalyst for pushing through the voting rights act five months later (March 7). Congress passes the Voting Rights Act of 1965, making it easier for Southern blacks to register to vote. Definition, Events, History, & Facts. American history has been marked by persistent and determined efforts to expand the scope and inclusiveness of civil rights. Although equal rights for all were affirmed in the founding documents of the United States, many of the new country’s inhabitants were denied essential rights.

African slaves and indentured servants did not have the inalienable right to “life, liberty, and the pursuit of happiness” that British colonists asserted to justify their Declaration of Independence. Nor were they included among the “People of the United States” who established the Constitution in order to “promote the general Welfare, and secure the Blessings of Liberty to ourselves and our Posterity.” Instead, the Constitution protected slavery by allowing the importation of slaves until 1808 and providing for the return of slaves who had escaped to other states. As the United States expanded its boundaries, Native American peoples resisted conquest and absorption.