Can Globalists Be Nationalists? An interview with Steve McIntosh ... In this podcast I ask Integral philosopher Steve McIntosh a question on the mind of many integral practitioners: how do we relate to the nationalist passions that are arising in many developed countries around the globe? 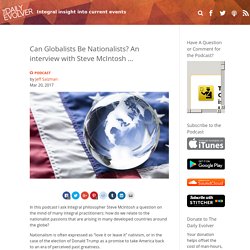 Nationalism is often expressed as “love it or leave it” nativism, or in the case of the election of Donald Trump as a promise to take America back to an era of perceived past greatness. On the other hand many Green-stage postmodernists reject patriotism entirely. As Steve says, “it is like nails on a chalkboard for people of postmodern consciousness to contemplate the good that America has done in its history.” Neither of these positions have much to offer the evolutionary thinker. To cultivate a more Integral worldview we must seek to find the truth in each perspective, and thereby reactivate the positive values of Amber-stage traditionalism within a larger system that appreciates the heritage of all humanity. 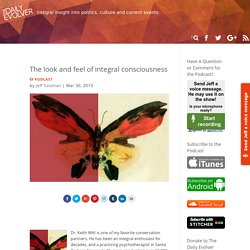 Keith Witt is one of my favorite conversation partners. He has been an integral enthusiast for decades, and a practicing psychotherapist in Santa Barbara for nearly 40 years, conducting over 50,000 therapeutic sessions. In other words he knows the human animal up close and personal.In this audio conversation, recorded earlier this morning, we talk about some of the textures and markers of integral consciousness.

Get more of Keith’s expertise and insight at drkeithwitt.com. JEFF: One technique you use as a therapist is simply to keep the conversation going. KEITH: In a dialectic, two people are pursuing truth, observing themselves observing truth, and interested in receiving influence and giving influence. I want everybody I work with to be abnormally loving, abnormally happy. JEFF: Just keeping the conversation going. Listen on the player or download below. Podcast: Download Subscribe: iTunes | Android | You May Also Like: Asking Dr.

October 20, 2012. From The Big Bang to Big Brother; The Evolution of Sex. Urge and urge and urge, Always the procreant urge of the world. 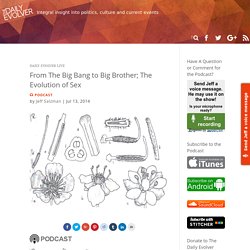 Out of the dimness opposite equals advance, always substance and increase, always sex, Always a knit of identity, always distinction, always a breed of life. To elaborate is no avail, learn’d and unlearn’d feel that it is so.Sure as the most certain sure, plumb in the uprights, well entretied, braced in the beams, Stout as a horse, affectionate, haughty, electrical, I and this mystery here we stand.– Walt Whitman Creativity is the essence of the kosmos. The Big Bang itself was an act of mind-stopping fecundity that has continued to complexify, in material and mind, for the past 13.8 billion years. The latest emergent appeared last week on Big Brother, the CBS reality show, where a straight man and a gay man began snuggling with each other. Zach Rance and Frankie Grande, AKA Zrankie, from the CBS reality TV show Big Brother.

Every stage of development expresses sex in its own way, including animals and bacteria. The world according to Wilber. From midlife crisis to a deeper sense of self, with Dr. Keith Witt. The popular picture of the midlife crisis is the man in his 40’s or 50’s who’s lost his job, his wife or his health. 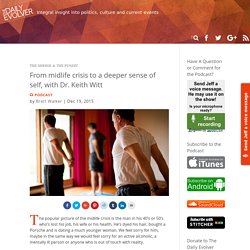 He’s dyed his hair, bought a Porsche and is dating a much younger woman. We feel sorry for him, maybe in the same way we would feel sorry for an active alcoholic, a mentally ill person or anyone who is out of touch with reality. Losing your job or your partner, having major health issues or just the general feeling of existential ennui can be terrible and even traumatic, but they are not necessarily unique to midlife. The midlife crisis has a flavor all its own. It kicks in with the realization that you’ve crossed the halfway point of your life and are on the downward slope. I want to emphasize the relational aspect of this. We negotiate one transformation after another during our lifetimes, beginning with birth and extending into old age and finally death. Dr. Keith Witt on how to regulate anxiety.