Anyone ever try 'Elemi oil'? Quote:Hut said:GuysThis is Baron (69rons) marketing scheme.He talks about obscure things very highly and then they randomly pop up on his site Flowing Visions.I could not care less about this Elemi Oil. 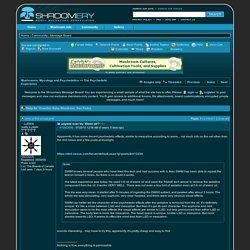 Even though Baron is a smart guy, he spends way too much time profiteering off of our community. That just doesn't sit right with me.He uses the DMT-Nexus as a portal for advertising.Do not be fooled. Kanna Shaman Smoke. Kanna Shaman Smoke is a potent, smoking blend rooted within the herbal smokes of South African tradition. 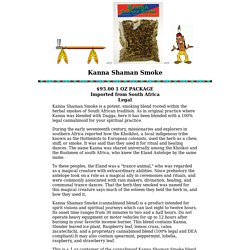 As in original practice where Kanna was blended with Dagga, here it has been blended with a 100% legal cannabinoid for your spiritual practice. During the early seventeenth century, missionaries and explorers in southern Africa reported how the Khoikhoi, a local indigenous tribe known as the Hottentots to European colonists, used the herb as a chew, sniff, or smoke. It was said that they used it for ritual and healing dances. The name Kanna was shared universally among the Khoikoi and the Bushmen of south Africa, who knew the Eland Antelope by the same name. To these peoples, the Eland was a "trance animal," who was regarded as a magical creature with extraordinary abilities. Kanna Shaman Smoke (cannabinoid blend) is a product intended for spirit visions and spiritual journeys which can last eight to twelve hours. This is a 1 oz container of the cannabinoid Kanna Shaman Smoke blend. 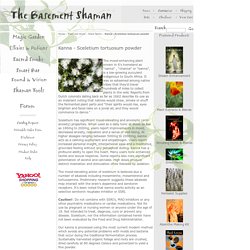 It was so esteemed among native tribes that they'd travel hundreds of miles to collect plants in the wild. Reports from Dutch colonists dating back as far as 1662 describe its use as an inebriant noting that natives would chew, smoke or snuff the fermented plant parts and "their spirits would rise, eyes brighten and faces take on a jovial air, and they would commence to dance. " Sceletium has significant mood-elevating and anxiolytic (anti-anxiety) properties. Kanna Effects and Dosages. Buy Kanna Online HERE cRocodile on Sceletium tortuosum: While I have never tasted pure mesembrine I have done quite a bit of experimentation with traditionally prepared Sceletium tortuosum powder from South Africa and documented Kanna's effects. 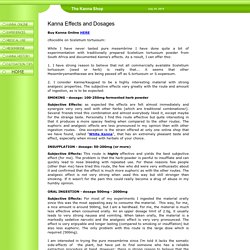 As a result, I can offer this: 1. I have strong reason to believe that not all commercially available Sceletium tortuosum (seed or herb) is really that... it seems that other Mesembryamanthaceae are being passed off as S.tortuosum or S.expansum. 2. SMOKING - dosage: 100-250mg fermented herb powder Subjective Effects: as expected the effects are felt almost immediately and synergize very very well with other herbs (which are traditional combinations!). Elemi oil - A virtually unknown legal psychedelic essential oil in Elemi Oil (Canarium luzonicum) Forum.

I while ago I was doing research on calamus and sassafras. 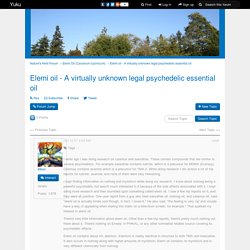 These contain compounds that are similar to several psychedelics. For example sassafras contains safrole, which is a precursor for MDMA (Ecstasy). Calamus contains asarone which is a precursor for TMA-2. While doing research I ran across a lot of trip reports for satrole, asarone, and none of them were very interesting. I kept finding information on nutmeg and myristicin while doing my research. Voacanga africana. Voacanga africana is a small tropical African tree that grows to 6m in height. 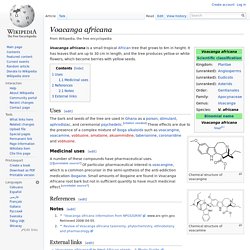 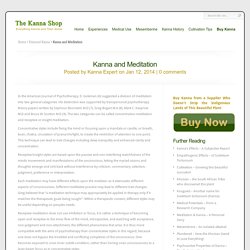 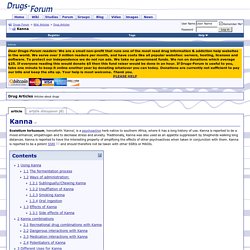 Some people report difficulties in getting effects from Kanna, or getting effects infrequently or inconsistently. This may be due to physiological differences, quality differences from different vendors or incorrect administration or preparation. Yopo bean. Datura spp. Lopophora. Ethanol Extraction of Psilocybin. : shrooms. Mushroom Extract. Making Powdered Extracts - altMD.com Article. Alcohol and water (tincturing) remove the more stimulating properties of herbs (resins, etc.). 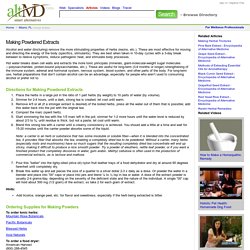 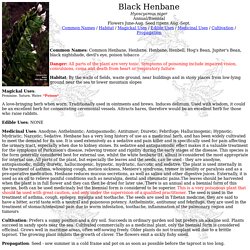 Seed ripens Aug. -Sept.Common Names / Habitat / Magickal Uses / Edible Uses / Medicinal Uses / Cultivation / Propagation. AN HALLUCINOGENIC SNUFF FROM THE AMAZON. Virola elongata, V. theiodora MYRISTICACEAE, Nutmeg Family There are approximately one hundred known species of New World plants from which psychoactive compounds are obtained, and of these, hallucinogens, comprising one category of psychoactive compounds, have held an especially important place in the rituals of indigenous tribes. One particular hallucinogen, extracted from trees of the genus Virola, is widely used by groups in wet tropical forests of South America. These tribes include the Waika of the upper Orinoco area in Venezuela and northern Brazil and the Paumar from near the Rio Purus in Amazonian Brazil.

The flowers are between 4 and 6 centimeters across and have six yellow petals. Argemone mexicana is a plant that not only produces a large number of seeds (just like Papaver somniferum), but is easy to sprout as well.