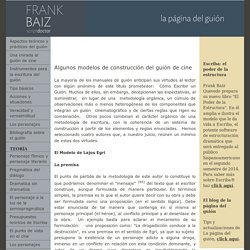 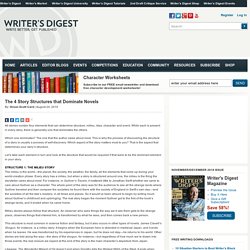 While each is present in every story, there is generally one that dominates the others. Which one dominates? The one that the author cares about most. This is why the process of discovering the structure of a story is usually a process of self-discovery. Which aspect of the story matters most to you? Let’s take each element in turn and look at the structure that would be required if that were to be the dominant element in your story. Businessinsider. Stephanie Mitchell/Harvard Staff PhotographerLisa Randall. 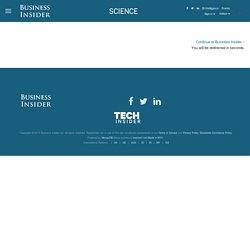 Where do we come from? The Little, Big Idea. How just doing the first, tiny part of your idea can help you find out what you need to do to really make it a big idea I often have conversations with people who have a Big Idea. 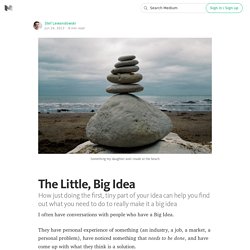 They have personal experience of something (an industry, a job, a market, a personal problem), have noticed something that needs to be done, and have come up with what they think is a solution. Then they tell me they’ve been working on the idea for a year or so, and pull out a text document, a presentation, and/or a diagram of how the website needs to look and work. And they begin going into vast detail about all of the features of the solution. Print Isn't Dead™ Magazine Graphic Design, Illustration and Printmaking. Irma Boom - Ibo - Idea Books. 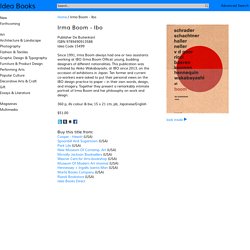 This publication was initiated by Akiko Wakabayashi, at IBO since 2013, on the occasion of exhibitions in Japan. Ten former and current co-workers were asked to put their personal views on the IBO design practice to paper – in their own words, design, and imagery. This Trilogy is the Best Binge-Viewing Experience of the. By Shelley Farmer | Indiewire May 4, 2015 at 10:32AM Satyajit Ray's gorgeous Apu Trilogy is finally receiving the U.S. release it deserves -- and the timing couldn't be better. 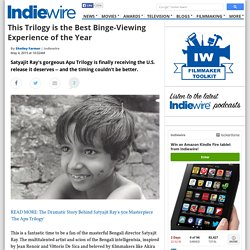 READ MORE: The Dramatic Story Behind Satyajit Ray's 50s Masterpiece 'The Apu Trilogy' This is a fantastic time to be a fan of the masterful Bengali director Satyajit Ray. The multitalented artist and scion of the Bengali intelligentsia, inspired by Jean Renoir and Vittorio De Sica and beloved by filmmakers like Akira Kurosawa and Martin Scorsese, has long suffered from relative neglect, compared to his contemporaries like Ingmar Bergman and Federico Fellini. Supersonic Electronic Visits Tatiana Suarez. Last... - SUPERSONIC ART. Anaïs Nin on the Elusive Nature of Joy. House of Secrets Covers. Episode 38: Play It Forward: An Interview with Greta Gerwig — The Organist — KCRW. 24 pieces of life advice from Werner Herzog. Paul Cronin's book of conversations with filmmaker Werner Herzog is called Werner Herzog - A Guide for the Perplexed. 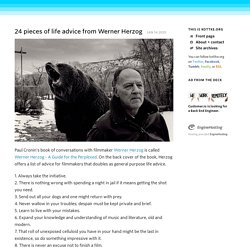 On the back cover of the book, Herzog offers a list of advice for filmmakers that doubles as general purpose life advice. 1. Always take the initiative. 2. There is nothing wrong with spending a night in jail if it means getting the shot you need. 3. Send out all your dogs and one might return with prey. 4. Diferencias entre logline, story line, sinopsis y tagline. 24 Life Lessons for Filmmakers from Werner Herzog. Werner Herzog has dedicated his life not only to creating uncompromising films, but uncompromising filmmakers as well. 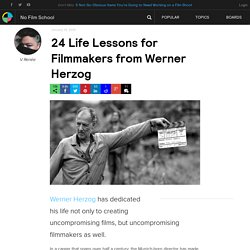 In a career that spans over half a century, the Munich-born director has made it his duty to help guide filmmakers as they navigate the wilderness of their creativity, from eating a shoe for a young Errol Morris to teaching students how to hack film at his Rogue Film School seminars. Still, there's so more to glean from him; just take a look at author Paul Cronin's book Werner Herzog: A Guide for the Perplexed, which features new interviews discussing Herzog’s films. Of course, the pages in-between the covers offer incredible insight into a perplexing cinematic mind, but the back cover contains a wealth of knowledge all on its own. On it Herzog lists 24 pieces of advice for filmmakers that should probably immediately be printed out, blown up, and tacked to your wall.

(Or bookmarked if you're just super digital.) Being obsessive about detail is being normal. Use this 8 Steps Questionnaire to Make Sure You Have a Strong and Useful Female Character. I’m going to cut to the chase here: it is not easy to write complex female characters, even for female storytellers. 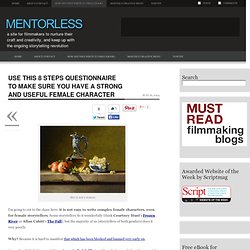 Some storytellers do it wonderfully (think Courtney Hunt‘s Frozen River or Allan Cubitt‘s The Fall), but the majority of us (storytellers of both genders) does it very poorly. Why? Because it is hard to manifest that which has been blocked and banned very early on. If This Isn’t Nice, What Is? Kurt Vonnegut’s Advice to the Young on Kindness, Computers, Community, and the Power of Great Teachers. By Maria Popova “Teaching, may I say, is the noblest profession of all in a democracy.” 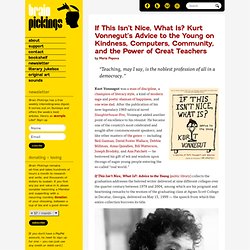 Kurt Vonnegut was a man of discipline, a champion of literary style, a kind of modern sage and poetic shaman of happiness, and one wise dad. Discover the 8 Steps Process of Award Winning Screenwriter Dustin Lance Black. In the short video below, American screenwriter and Academy Award winner Dustin Lance Black takes us through his very well defined creative process to produce screenplays that last. Despite the many videos and articles shared over two years on mentorless on screenwriters craft, technique and work (see full list at the end), I think Lance Black’s interview is the first that covers a process with such clear and detailed steps. I broke them down for you below, but make sure to watch the whole video too, it’s under 7 minutes, nicely filmed and quite inspiring.

What I found fascinating in Lance Black’s process is how much work he puts before writing his first draft. See for yourself: Art as Therapy: Alain de Botton on the 7 Psychological Functions of Art. By Maria Popova “Art holds out the promise of inner wholeness.” The question of what art is has occupied humanity since the dawn of recorded history. Mumblecore: 'It was never a unified movement. There was no manifesto' Cinema history does not want for new waves. But the batch of lo-fi American movies referred to during the past decade as "mumblecore" may be the first example of a no-wave: a movement without movement, a revolution only in the sense of something going round and round with little discernible progress.

All of the artists associated with it have moved on to some extent. Andrew Bujalski, the most skilful of the mumblecore group, has made the playful, experimental Computer Chess, released later this month. The prolific Joe Swanberg, whose loosey-goosey methods on early movies such as Hannah Takes the Stairs extended to living with his cast and crew in one apartment during production, directed Hollywood stars Olivia Wilde and Anna Kendrick in Drinking Buddies. And the first lady of mumblecore, writer and actor Greta Gerwig, recently co-wrote and starred in Frances Ha, which married a Nouvelle Vague aesthetic to a mumblecore-style non-plot.

The Dictionary of Obscure Sorrows. Video filming, editing, and production. Why Use Video? Since its invention, film has been used as an effective way to reach and influence the masses as a form of advertising; the most common of these being television commercials.

With time it has naturally evolved and adapted to function in the digital age we currently live in. The current surge in household Digital Video Recorders in North America is steadily making TV commercials obsolete by providing the viewer with the option to simply fast-forward through them, thus turning TV advertising budgets into an unnecessary expense. For that reason many companies are switching their focus to the Internet. Video filming, editing, and production. Ain't It Cool News: The best in movie, TV, DVD, and comic book news.

How to Remember More of What You Read & Improve Your Memorization Skills. Whether you are a student or looking for self-improvement, it can be challenging if you struggle to remember what you have already read. Remembering more of what you have read can be important for keeping well informed on current events, researching interests on the internet or even reading fiction and non-fiction books. Students in particular are increasingly looking for additional ways to improve their memory and absorb more of what they are reading. This is primarily due to a number of schools and colleges looking to ban laptops and digital devices within lessons and lectures.

Design finds for the creative mind. Sight & Sound 2012 Polls. Once a decade Sight & Sound asks critics to select the Greatest Films of All Time. We’re proud that, thanks to its longevity and critical reach, this poll has come to be regarded as the most trusted guide there is to the canon of cinema greats, not to mention a barometer of changing critical tastes.

Famously, Citizen Kane topped our poll every decade from 1962 to 2002… For our 2012 edition, riding on the back of an increasingly globalised movie culture, we made a concerted push to take the poll truly worldwide – extending invitations to over 1,000 critics, programmers, academics, distributors, writers and other cinephiles, and receiving 846 top-ten lists from correspondents in 73 countries, citing 2,045 different films. 6 Filmmaking Tips From Yasujirō Ozu. Henry Miller’s 11 Commandments of Writing & Daily Creative Routine. After David Ogilvy’s wildly popular 10 tips on writing and a selection of advice from modernity’s greatest writers, here comes some from the prolific writer and painter Henry Miller (December 26, 1891–June 7, 1980)

The Daily Routines of Famous Writers. By Maria Popova. 10 Tips on Writing from David Ogilvy. My Criterion. The 5 Most Dangerous Creativity Killers. When it comes to doing creative work, it’s important to not only look for ways to let our creativity thrive, but to also be mindful of insidious “creativity killers” that can sneak up and strangle our ability to come up with our best ideas. According to research from Harvard University, there are five main culprits that are responsible for killing our creativity. Category:In-jokes. El velocípedo : sus aplicaciones higiénicas y terapéuticas - José Codina Castellví.