New supercomputer simulations explore magnetic reconnection and make a surprising discovery. Magnetic reconnection, a process in which magnetic field lines tear and come back together, releasing large amounts of kinetic energy, occurs throughout the universe. 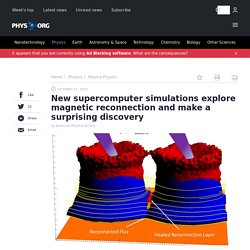 The process gives rise to auroras, solar flares and geomagnetic storms that can disrupt cell phone service and electric grids on Earth. A major challenge in the study of magnetic reconnection, however, is bridging the gap between these large-scale astrophysical scenarios and small-scale experiments that can be done in a lab. Researchers have now overcome this barrier through a combination of clever experiments and cutting-edge simulations. Introducing quantum convolutional neural networks. Machine learning techniques have so far proved to be very promising for the analysis of data in several fields, with many potential applications. 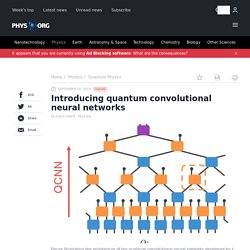 However, researchers have found that applying these methods to quantum physics problems is far more challenging due to the exponential complexity of many-body systems. Quantum many-body systems are essentially microscopic structures made up of several interacting particles. While quantum physics studies have focused on the collective behavior of these systems, using machine learning in these investigations has proven to be very difficult. With this in mind, a team of researchers at Harvard University recently developed a quantum circuit-based algorithm inspired by convolutional neural networks (CNNs), a popular machine learning technique that has achieved remarkable results in a variety of fields. In their study, Choi and his colleagues assumed that CNNs owe their great success to two important features. More information: Iris Cong et al. Near misses at Large Hadron Collider shed light on the onset of gluon-dominated protons. 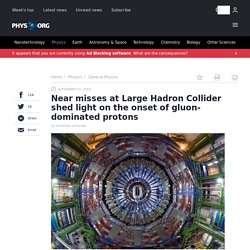 The paper centers on work at the Compact Muon Solenoid, an experiment at the Large Hadron Collider, to better understand the behavior of gluons. Gluons are elementary particles that are responsible for "gluing" together quarks and anti-quarks to form protons and neutrons—so, gluons play a role in about 98% of all the visible matter in the universe.

The Strangest Phenomena in the Cosmos? In 1966, Erast Gliner, a young physicist at the Ioffe Physico-Technical Institute in Leningrad, proposed a hypothesis that very large stars should collapse into what could now be called Generic Objects of Dark Energy (GEODEs) that appear to be black holes when viewed from the outside but, unlike black holes, they contain dark energy instead of a singularity. 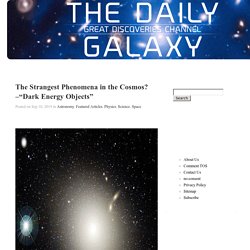 Fast forward to new research at the University of Hawaii at Manoa: physicists usually assume that a cosmologically large system, such as the universe, is insensitive to details of the small systems contained within it. Astrophysicist Kevin Croker and mathematician Joel Weiner have identified and corrected a subtle error that was made when applying Einstein’s equations to model the growth of the universe that shows that this assumption can fail for the compact objects that remain after the collapse and explosion of very large stars. 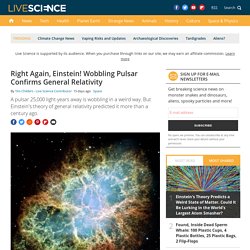 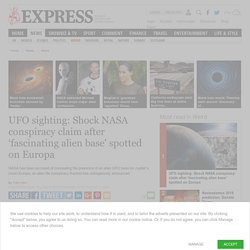 What is Dark Matter? Roughly 80% of the mass of the universe is made up of material that scientists cannot directly observe. 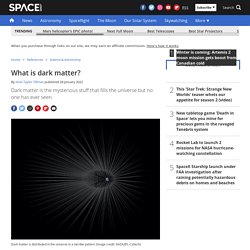 Known as dark matter, this bizarre ingredient does not emit light or energy. So why do scientists think it dominates? Since at least the 1920s, astronomers have hypothesized that the universe contains more matter than seen by the naked eye. Support for dark matter has grown since then, and although no solid direct evidence of dark matter has been detected, there have been strong possibilities in recent years. Something Strange Is Happening in the Fermi Bubbles. Paul M. 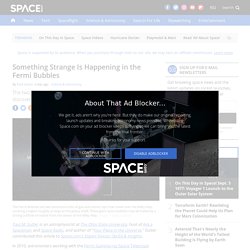 Sutter is an astrophysicist at The Ohio State University, host of Ask a Spaceman and Space Radio, and author of "Your Place in the Universe. " Sutter contributed this article to Space.com's Expert Voices: Op-Ed & Insights. In 2010, astronomers working with the Fermi Gamma-ray Space Telescope announced the discovery of two giant blobs. Gravitoelectromagnetism. Gravitoelectromagnetism, abbreviated GEM, refers to a set of formal analogies between the equations for electromagnetism and relativistic gravitation; specifically: between Maxwell's field equations and an approximation, valid under certain conditions, to the Einstein field equations for general relativity. 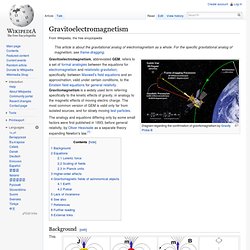 Gravitomagnetism is a widely used term referring specifically to the kinetic effects of gravity, in analogy to the magnetic effects of moving electric charge. The most common version of GEM is valid only far from isolated sources, and for slowly moving test particles. The analogy and equations differing only by some small factors were first published in 1893, before general relativity, by Oliver Heaviside as a separate theory expanding Newton's law.[1] Background[edit] ...or equivalently currentI, same field profile, and field generation due to rotation. Physical analogues of fields[2]