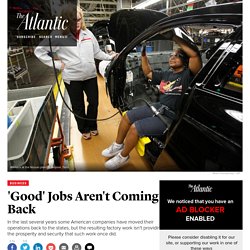 —The hulking General Motors factory in this town south of Nashville undermines the complaints by politicians left and right that America doesn’t make things anymore. A year ago, GM announced it was moving production of its best-selling vehicle, the Cadillac SRX, from Mexico to this plant in Tennessee. Today 3,000 people work on this 6.9 million square-foot campus, and more are being hired. GM is one of the hundreds of companies, big and small, that have moved manufacturing back to the United States from overseas. Outsourcing decimated American manufacturing in the 1980s and 1990s, erasing nearly six million jobs between 1989 and 2009. But the number of manufacturing jobs has started to slowly grow again, and about 700,000 jobs have been added since 2010. But these are not your father’s manufacturing jobs. 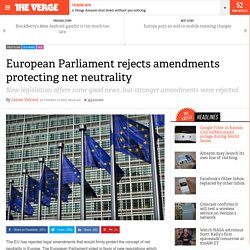 The European Parliament voted in favor of new regulations which proponents say establish an internet "without discrimination," but advocates for net neutrality say the laws contain a number of loopholes which could lead to the creation of a tiered internet service. The legislation also includes an end to roaming charges in Europe, although some critics say those laws are also less robust than they appear. The new legislation allows the creation of internet fast lanes for "specialized services" and lets ISPs offer so-called "zero-rating" products — i.e. apps and services that don't count toward monthly data allowances — without restrictions.

Critics of the legislation say that the latter loophole will allow big internet companies to favor certain services in commercial deals. The new legislation allows the establishment of internet fast lanes A "broken promise" George Washington, Mules, and Donald Trump. I’m reading The Oregon Trail and the author reminds us that real estate speculator-to-president is not an entirely new path: George Washington was America’s original maharaja of mules. 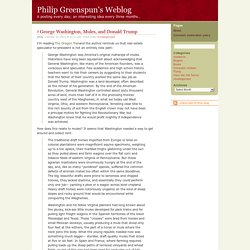 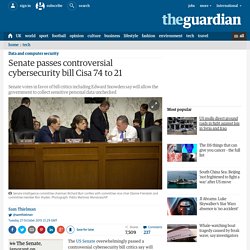 The vote on Tuesday was 74 to 21 in support of the legislation. Democratic presidential contender Bernie Sanders voted against the bill. None of the Republican presidential candidates (except Lindsey Graham, who voted in favor) were present to cast a vote, including Rand Paul, who has made privacy from surveillance a major plank of his campaign platform. Ahead of the vote a group of university professors specializing in tech law, many from the Princeton Center for Information Technology Policy, sent an open letter to the Senate, urging them not to pass the bill. The bill, they wrote, would fatally undermine the Freedom of Information Act (Foia). Snowden, via Twitter, said that “a vote for Cisa is a vote against the internet.”

Senate Rejects All CISA Amendments Designed To Protect Privacy, Reiterating That It's A Surveillance Bill. In case you weren't already convinced that CISA is a surveillance bill masquerading as a cybersecurity bill, today the Senate rejected four separate amendments to the bill that attempted to better protect the privacy of Americans. 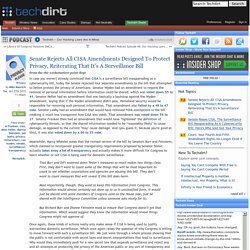 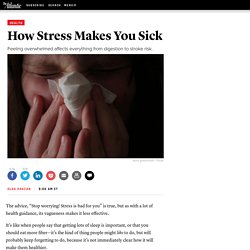 Stress is bad for you” is true, but as with a lot of health guidance, its vagueness makes it less effective. It’s like when people say that getting lots of sleep is important, or that you should eat more fiber—it’s the kind of thing people might like to do, but will probably keep forgetting to do, because it’s not immediately clear how it will make them healthier. This video from TED Ed, written by the Emory University professor of medicine Sharon Bergquist, clarifies how worrying actually affects the body, outlining what scientists know so far about the stress-sickness connection. Discovery of genes involved in inner ear development hints at a way to restore hearing and balance. Loud noise, trauma, infections, plain old aging—many things can destroy hair cells, the delicate sensors of balance and sound within the inner ear. 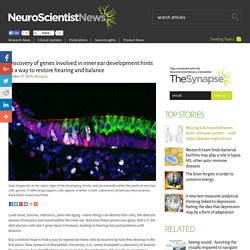 And once these sensors are gone, that’s it; the delicate hair cells don’t grow back in humans, leading to hearing loss and problems with balance. But scientists hope to find a way to regenerate these cells by examining how they develop in the first place. The age of information overload. Victoria Belmont finds out who is really in charge - our technology or us? 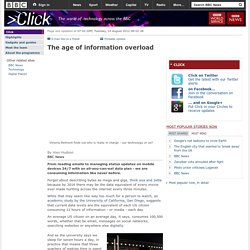 From reading emails to managing status updates on mobile devices 24/7 with an all-you-can-eat data plan - we are consuming information like never before. Forget about describing bytes as mega and giga, think exa and zetta because by 2016 there may be the data equivalent of every movie ever made hurtling across the internet every three minutes. While that may seem like way too much for a person to watch, an academic study by the University of California, San Diego, suggests that current data levels are the equivalent of each US citizen consuming 12 hours of information - or media - each day. An average US citizen on an average day, it says, consumes 100,500 words, whether that be email, messages on social networks, searching websites or anywhere else digitally. Richa Vyas's answer to How do parents deceive their children? Business Models, Information Technology, and the Company of the Future. Information technology has, of course, played a major role in reshaping business models over the past 20 years. 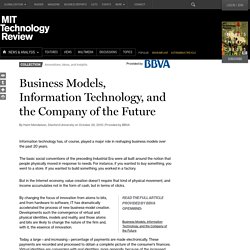 The basic social conventions of the preceding Industrial Era were all built around the notion that people physically moved in response to needs. For instance, if you wanted to buy something, you went to a store. If you wanted to build something, you worked in a factory. But in the Internet economy, value creation doesn’t require that kind of physical movement, and income accumulates not in the form of cash, but in terms of clicks. Ignore Everybody. By Tobias van Schneiderfirst appeared on my private email list. 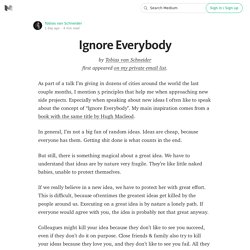 As part of a talk I’m giving in dozens of cities around the world the last couple months, I mention 5 principles that help me when approaching new side projects. Especially when speaking about new ideas I often like to speak about the concept of “Ignore Everybody”. My main inspiration comes from a book with the same title by Hugh Macleod. In general, I’m not a big fan of random ideas. Ideas are cheap, because everyone has them. How to Fake Being More Confident When You’re Just Not Feeling It. How to Create an Untraceable Messaging Device With an Old Phone. Agency won’t give GOP internal docs on climate research. The federal government’s chief climate research agency is refusing to give House Republicans the detailed information they want on a controversial study on climate change. Citing confidentiality concerns and the integrity of the scientific process, the National Oceanic and Atmospheric Administration (NOAA) said it won’t give Rep. Lamar Smith (R-Texas) the research documents he subpoenaed.

At the center of the controversy is a study that concluded there has not been a 15-year “pause” in global warming. Some NOAA scientists contributed to the report. Próximamente. I am Christiana Figueres, the top UN Climate Change official. I'm leading the charge on a new global climate change agreement. AMA! : IAmA. The Plan to Save the World. Right now, we're in a car, hanging on for dear life as we hurtle around a mountain bend.

If we don't hit the brakes soon, we're going to lose control, crash through the guardrail, and careen into the abyss. We've been fully warned about the danger ahead, but now here we are, testing our fate. Already, the effects of climate change are clear and significant. How to Build a Portable Hacking Station with a Raspberry Pi and Kali Linux. Three Ways to Remotely Monitor Someone Else's Computer. U.S. Military Used Christian NGO as Front for North Korea Espionage. ON MAY 10, 2007, in the East Room of the White House, President George W. Bush presided over a ceremony honoring the nation’s most accomplished community service leaders. Among those collecting a President’s Volunteer Service Award that afternoon was Kay Hiramine, the Colorado-based founder of a multimillion-dollar humanitarian organization.

Hiramine’s NGO, Humanitarian International Services Group, or HISG, won special praise from the president for having demonstrated how a private charity could step in quickly in response to a crisis. dQmiQxb. OK Google: Where Do You Store Recordings Of My Commands? : All Tech Considered. Itoggle caption Ariel Zambelich/NPR Sure, our smartphones know a lot about who we are.

If you have an Android smartphone, you may not know that Google saves all of the voice commands you give it. They're archived online in your Google account. Google says it keeps the audio search information to improve its voice recognition. In 1967, This Was The Only Way You Could Watch The Beatles : All Songs Considered. It was a moment of television magic. I heard a brand new song from my favorite band and saw them on film, walking around and riding horses. If the expression "my mind was blown" had been created, I'd have phoned up my friends and told them that. Let's Talk About The Magic Box That Makes Your Dreams Come True. Birth order doesn’t affect your personality—just your intelligence. It’s completely ridiculous to think that humans could live on Mars. Indonesia is burning. So why is the world looking away? How to Manipulate Your Kids into Doing What You Want.

Every Day I Want To Quit Social Media. European Union sides with United States on South China Sea incident. History, Travel, Arts, Science, People, Places. Bill Murray Interview - Bill Murray on Wes Anderson, Moonrise Kingdom. A successful life depends on following your instincts over your primal need to fit in. The Saudi Dirty Dozen and Jihadi as Risk Disposal. Policing the Troubles. New Understanding of Time Changes the Way We See the World. Mikdad: Russian engagement in counterterrorism will make new transformation in the world. Damascus, SANA – Deputy Foreign and Expatriates Minister Fayssal Mikdad said that Russia has engaged in the war to fight terrorism in Syria after the U.S.

Marvin Minsky Reflects on a Life in AI. All. Fall is the best time of year - GIF on Imgur. How El Salvador Fell Into A Web Of Gang Violence : Goats and Soda. Six Ways the Media Has Misreported Syria. Top 10 Evil Ways to Use Technology. Russia and the Curse of Geography, From Ivan the Terrible to Vladimir Putin. Comcast vs. Google Fiber: Facebook post bashing Google backfires. The New York Times - Breaking News, World News & Multimedia. Know The Signs: For Some, Post-Pregnancy Is Anything But Magical. The case for a United States of Europe. The Crazy-Daring, Concrete Bus Stops of the Soviet Era — Vantage. The Decay of Twitter. Marijuana Legalization in Ohio: The Wrong Way to Legalize? Data Mining Reveals the Extent of China's Ghost Cities.

Amazon starts Black Friday sale three weeks early. The Best Thanksgiving Kitchen Tools and Tableware. Nix the Nightcap: How Alcohol and Marijuana Can Harm Your Sleep. AI Researchers Teach a Search Engine to Read and Understand Academic Papers. Enhancing National Preparedness to Space-Weather Events. The HIBR Pillow Keeps You Cool, May Be the Last Pillow You Ever Buy. Against subtlety: The case for heavy-handedness in art. Google Searches Put Consumers at Risk. Buying Phones From Carriers Sucks, and It's Time For Us to Stop.

Library Genesis. The Cost Of Living In Every Part Of The World In One Incredible Infographic. Can you learn in your sleep? How to learn with zero effort. The end of capitalism has begun. Gift wrapping perfection. How a Startup Called Improbable Hopes to Revolutionize Virtual Worlds. Elizabeth Warren explains the real way corruption in Washington works. Patient Zero of the selfie age: Why JenniCam abandoned her digital life. The Chemistry Behind Making the Perfect Grilled Cheese Sandwich. Quora. Ambling Through America’s Most Stoned Suburbs. After the Snowden Revelations, Did We Change Our Behavior on the Internet? Short a ship, the Navy tells Congress of “carrier gap” The New York Times - Breaking News, World News & Multimedia.

Congressman introduces bill to end warrantless Stingray surveillance. Mossberg: It's time for Google to make its own hardware. The Suckiest Things About College. They’re Not Scientists. World’s top Internet companies and telcos rated on protection of users’ digital rights. The 'Force of the Future' and the Fate of the United States Military. Treaties and International Law - Treaties for which NZ is Depositary - Trans-Pacific Strategic Economic Partnership - NZ Ministry of Foreign Affairs and Trade.