Being ‘Indistractable’ Will Be the Skill of the Future. We bemoan the fact that technology is becoming more pervasive and persuasive, and complain that our devices are “hijacking” our brains. 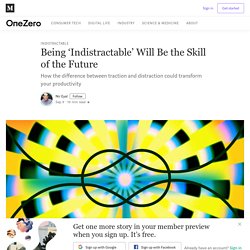 On top of all that, we just can’t seem to disconnect from work. Hoping tech companies change these products or that your boss finally learns to respect your time may take longer than you’re willing to wait. Although distractions aren’t necessarily your fault, they are your responsibility. It’s time to equip yourself to manage your distractions. Let’s start with a definition of distraction. If distraction becomes a habit, we may be unable to sustain the focus required for creativity in our professional and personal lives. The opposite of “distraction” is “traction.” What prompts us to traction or distraction? External triggers are cues from our environment that tell us what to do next. Internal triggers are cues that come from within.

Now we can draw a complete picture of what I call the “Indistractable Model”: Step 1. Why More Knowledge Won't Make You More Successful. An entrepreneur's guide to learning for quality, not quantity. 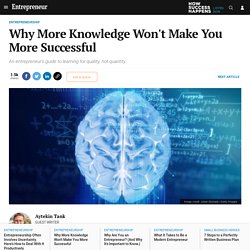 August 12, 2019 7 min read Opinions expressed by Entrepreneur contributors are their own. From the time we’re young, we’re taught that knowledge is power. Our education system evaluates students based on their ability to cram as much information as possible into their heads. Similarly, in today’s startup climate, it’s tempting to think that learning more will strengthen your competitive advantage. Related: 8 Success Lessons From the Richest Person on the Planet As CEO of my own company, JotForm, I’m no stranger to the feeling that I should be acquiring some type of informational currency at all times. Neuroscientists say multitasking literally drains the energy reserves of your brain. Does your morning routine consist of checking emails, browsing Facebook, downing coffee, heading to the train while Googling one last idea, checking notifications, more coffee, and going through your work email? 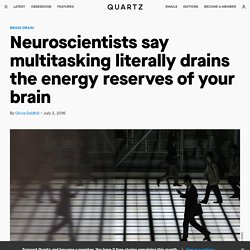 The myriad activities crammed into your morning, and the constant switching between them, is likely making you very tired. When we attempt to multitask, we don’t actually do more than one activity at once, but quickly switch between them. And this switching is exhausting. It uses up oxygenated glucose in the brain, running down the same fuel that’s needed to focus on a task. “That switching comes with a biological cost that ends up making us feel tired much more quickly than if we sustain attention on one thing,” says Daniel Levitin, professor of behavioral neuroscience at McGill University. Studies have found that people who take 15-minute breaks every couple of hours end up being more productive, says Levitin. Random behavior can be incredible difficult to combat. Want to Improve Your Memory? A Decade-Long Stanford Study Suggests You Should Stop Doing This 1 Thing.

Do you ever have trouble keeping track of all the things racing through your mind? 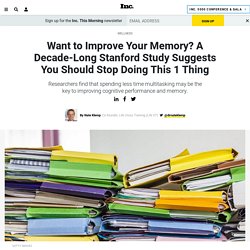 Do you ever feel like your life would fall apart without to-do lists, calendars, and constant reminders? Most of us believe the subtle shifts in memory we experience are the result of aging. The older we get, we think, the harder we have to work to encode new memories. Researchers at the Stanford Memory Lab, however, found that aging isn't the only factor that diminishes what psychologists call "working memory": our ability to process and store information. Another key factor is the amount of time we spend multitasking. In the modern attention economy, we're all guilty of this habit. After examining over a decade of data, these Stanford researchers found that "heavy" multitaskers significantly underperformed "light" multitaskers on tasks that required working memory and sustained attention.

Why does the amount of time we spend multitasking have such a negative impact on memory? The Navy’s USS Gabrielle Giffords and the Future of Work. In the faint predawn light, the ship doesn’t look unusual. 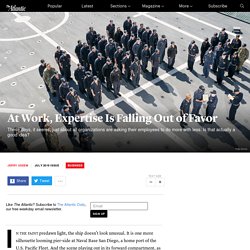 It is one more silhouette looming pier-side at Naval Base San Diego, a home port of the U.S. Pacific Fleet. And the scene playing out in its forward compartment, as the crew members ready themselves for departure, is as old as the Navy itself. Three sailors in blue coveralls heave on a massive rope. “Avast!” To hear more feature stories, see our full list or get the Audm iPhone app. But now the sun is up, and the differences start to show. Most obvious is the ship’s lower contour. The ship’s most futuristic aspect, though, is its crew. On most Navy ships, only a boatswain’s mate—the oldest of the Navy’s 60-odd occupations—would handle the ropes, which can quickly remove a finger or foot. Two boatswain’s mates are on hand, but only to instruct and oversee—and they too wear lots of hats, between them: fire-team leader, search-and-rescue swimmer, crane operator, deck patroller, helicopter-salvage coordinator.