How Photos of Your Kids Are Powering Surveillance Technology. One day in 2005, a mother in Evanston, Ill., joined Flickr. 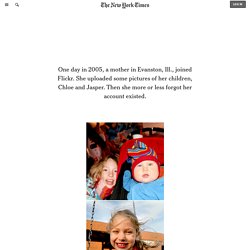 She uploaded some pictures of her children, Chloe and Jasper. Then she more or less forgot her account existed. Years later, their faces are in a database that’s used to test and train some of the most sophisticated artificial intelligence systems in the world. A selection of images from the MegaFace database. Millions of Flickr images were sucked into a database called MegaFace. By Kashmir Hill and Aaron Krolik The pictures of Chloe and Jasper Papa as kids are typically goofy fare: grinning with their parents; sticking their tongues out; costumed for Halloween.

None of them could have foreseen that 14 years later, those images would reside in an unprecedentedly huge facial-recognition database called MegaFace. “It’s gross and uncomfortable,” said Mx. Chloe Papa Amanda Lucier for The New York Times By law, most Americans in the database don’t need to be asked for their permission — but the Papas should have been.

‘What the hell? Anti-surveillance mask lets you pass as someone else. If the world starts looking like a scene from "Matrix 3" where everyone has Agent Smith's face, you can thank Leo Selvaggio. 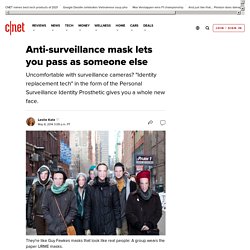 His rubber mask aimed at foiling surveillance cameras features his visage, and if he has his way, plenty of people will be sporting the Personal Surveillance Identity Prosthetic in public. It's one of three products made by the Chicago-based artist's URME Surveillance, a venture dedicated to "protecting the public from surveillance and creating a safe space to explore our digital identities. " "Our world is becoming increasingly surveilled. For example, Chicago has over 25,000 cameras networked to a single facial recognition hub," reads the URME (pronounced U R Me) site.

"We don't believe you should be tracked just because you want to walk outside and you shouldn't have to hide either. - The Washington Post. US facial recognition will cover 97 percent of departing airline passengers within four years. The Department of Homeland Security says it expects to use facial recognition technology on 97 percent of departing passengers within the next four years. 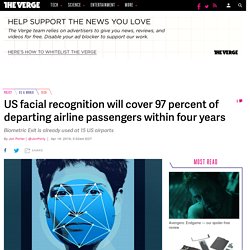 The system, which involves photographing passengers before they board their flight, first started rolling out in 2017, and was operational in 15 US airports as of the end of 2018. The facial recognition system works by photographing passengers at their departure gate. It then cross-references this photograph against a library populated with facesimages from visa and passport applications, as well as those taken by border agents when foreigners enter the country. The aim of the system is to offer “Biometric Exit,” which gives authorities as good an idea of who’s leaving the country as who’s entering it, and allows them to identify people who have overstayed their visas.

Quartz notes that US authorities have traditionally relied on airline flight manifests to track who’s leaving the country. Should We Be Worried About Computerized Facial Recognition? Stephen Lawlor and David Hunt have witnessed a lot of bullying. 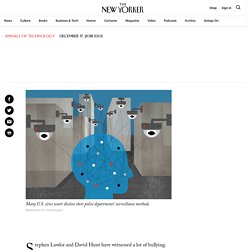 Among the principal victims, in their experience, are young, first-time mothers, who are sometimes so intimidated that they’re unable to eat. Isolating their tormentors in a separate group isn’t a solution, Hunt told me: “They just knock the crap out of each other.” The bullies and victims we were discussing are cows. Lawlor milks about three hundred Holsteins on a farm in County Meath, Ireland, an hour northwest of Dublin. The farm has been in his family for four generations; his calf barn, which is long and narrow and made of primeval-looking gray stone, was a horse stable in his grandfather’s time.

It was partly in the hope of resolving this issue that Lawlor had engaged Hunt’s company, Cainthus, an artificial-intelligence startup based in Dublin. Cainthus’s chief financial officer is David Hunt’s fraternal twin, Ross. “Agriculture is the least digitized industry in the world right now,” David told me. With No Laws To Guide It, Here's How Orlando Is Using Amazon's Facial Recognition Technology. Walking around downtown Orlando, you might not notice the lightbulb-sized camera affixed to one of the traffic signal poles along the city’s palm tree–studded avenues. 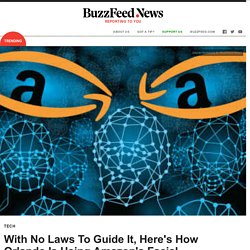 But it’s there, scanning all the same. If it sees you, the camera will instantly send a live video feed over to Amazon's facial “Rekognition” system, cross-referencing your face against persons of interest. It’s one of three IRIS cameras in the Orlando area whose video feeds are processed by a system that could someday flag potential criminal matches — for now, all the “persons of interest” are volunteers from the Orlando police — and among a growing number of facial recognition systems nationally. In the US, there are no laws governing the use of facial recognition, and there is no regulatory framework limiting its law enforcement applications.

But that hasn't stopped law enforcement from piloting these systems. To be clear, Orlando has not yet deployed a citywide facial recognition project. City of Orlando Sgt. Sgt.