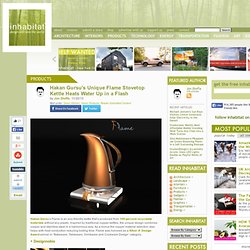 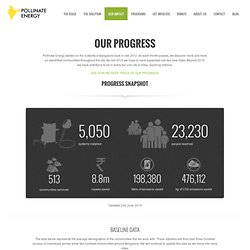 As each month passes, we discover more and more un-electrified communities throughout the city. By mid 2015 we hope to have expanded into two new cities. Beyond 2015, we have ambitions to be in every tier-one city in India, reaching millions. systems installed people reached communities serviced rupees saved liters of kerosene saved kg of CO2 emissions saved *Updated 2nd June, 2014. The data below represents the average demographic of the communities that we work with. Our current monitoring and evaluation strategy, while effective, is relatively simple. Watch this space… The Solution. 20 Clever Inventions You Probably Didn't Know Were Made By Indians. Indian inventions and discoveries have been instrumental in shaping the face of the current modern world. 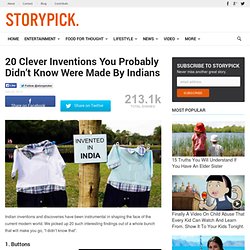 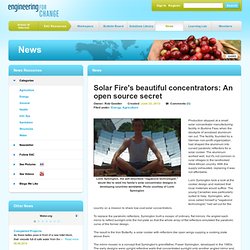 Photo courtesy of Lorin Symington Production stopped at a small solar concentrator manufacturing facility in Burkina Faso when the stockpile of anodized aluminum ran out. Hubs & Spokes. DSH is not a physically centralized system. 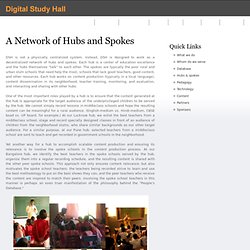 Instead, DSH is designed to work as a decentralized network of hubs and spokes. Each hub is a center of education excellence and the hubs themselves "talk" to each other. The spokes are typically the poor rural and urban slum schools that need help the most, schools that lack good teachers, good content, and other resources. Her goal is to impart holistic education to the poor and advocate gender studies for both girls and boys. Posted 26-Jan-2013 Vol 4 Issue 4 Educationist Urvashi Sahni uses an innovative and cost-effective technique to impart quality education to underprivileged school kids. 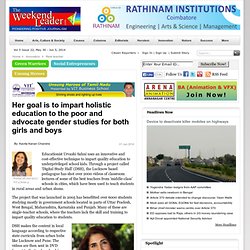 Through a project called ‘Digital Study Hall’ (DSH), the Lucknow based pedagogue has shot over 2000 videos of classroom lectures of some of the best teachers from ‘middle-class’ schools in cities, which have been used to teach students in rural areas and urban slums. The project that was launched in 2005 has benefitted over 6000 students studying mostly in government schools located in parts of Uttar Pradesh, West Bengal, Maharashtra, Karnataka and Punjab.

Many of these are single-teacher schools, where the teachers lack the skill and training to impart quality education to students. DSH makes the content in local language according to respective state curricula from urban hubs like Lucknow and Pune. Chilean Incubator Wants Companies Using Tech to Help the Poor. 40 Of The Most Powerful Social Issue Ads That’ll Make You Stop And Think. Many people complain about advertisements as an obnoxious way for companies to invade our everyday lives and cram their products down our throats, but that’s not all that advertisements are good for. 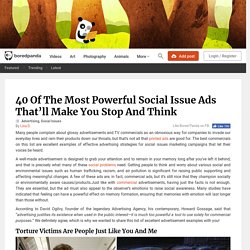 The advertisements on this list are excellent examples of effective advertising strategies for social issue campaigns that let their voices be heard. Show Full Text A well-made advertisement is designed to grab your attention and to remain in your memory long after you’ve left it behind, and that is exactly what many of these social causes need. Getting people to think and worry about various social and environmental issues (or even simply getting them to be aware of them) is important for raising public supporting and affecting meaningful changes. Alternative Self Build Techniques. If you want to learn about alternative building techniques, then this show feature is designed with you in mind! 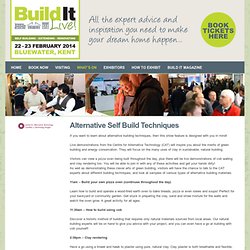 Live demonstrations from the Centre for Alternative Technology (CAT) will inspire you about the merits of green building and energy conservation. They will focus on the many uses of clay in sustainable, natural building. Visitors can view a pizza oven being built throughout the day, plus there will be live demonstrations of cob walling and clay rendering too. You will be able to join in with any of these activities and get your hands dirty! As well as demonstrating these clever arts of green building, visitors will have the chance to talk to the CAT experts about different building techniques, and look at samples of various types of alternative building materials.

Build It Live: Getting Muddy with Self-Builders in Kent, 22nd & 23rd Feb. This weekend CAT is travelling to Kent and we are planning to get muddy. 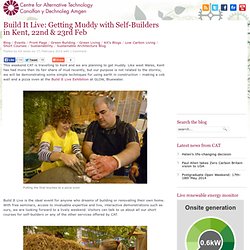 Like west Wales, Kent has had more then its fair share of mud recently, but our purpose is not related to the storms; we will be demonstrating some simple techniques for using earth in construction – making a cob wall and a pizza oven at the Build It Live Exhibition at GLOW, Bluewater. Putting the final touches to a pizza oven Build It Live is the ideal event for anyone who dreams of building or renovating their own home. Build It Live: Getting Muddy with Self-Builders in Kent, 22nd & 23rd Feb. GuideStar CTP. Part 1 of 5 - How to Make Better Decisions - BBC Horizon.

Www.cse.iitb.ac.in/~sohoni/sel.pdf. Esops in Education. Our Employee Social Options (Esops) program supports employees in creating volunteering projects based on the needs of underprivileged communities in and around their place of work. 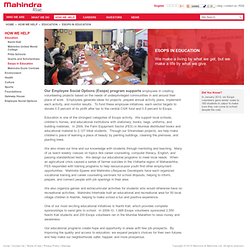 Employees generate ideas for projects, prepare annual activity plans, implement each activity, and monitor results. To fund these employee initiatives, each sector targets to donate 0.5 percent of its profit after tax to the central CSR fund and 0.5 percent to Esops. Education is one of the strongest categories of Esops activity. We support local schools, children’s homes, and educational institutions with stationery, books, bags, uniforms, and building materials. In 2009, the Farm Equipment Sector (FES) in Mumbai distributed books and educational material to 2,127 tribal students. What's the next big thing in public services? Citizens. MELBOURNE -- "It was Friday, July 15, 2011," Loren O'Keeffe states without faltering, pinpointing the day her then-24-year-old brother Dan went (and remains) missing from their home in Geelong, a regional town on the outskirts of Melbourne.

When the 29-year-old turned to the police for help they said only missing cases that are deemed suspicious (thus criminal) by police are allocated search resources. O'Keeffe decided to take matters into her own hands, with her efforts culminating in the establishment of Missing Persons Advocacy Network (MPAN), a non-profit organization that offers an actionable how-to kit that enables anyone to conduct their own missing persons search. Our Approach » Bicycles Against Poverty. A clearing house of ideas, info, alternatives, on rural India's multiple crises. Wilson Solar Grill for outdoor cooking - National Green Living. A group of MIT students have been working on a solar grill that uses a Fresnel lens and solar energy to melt down a container of Lithium Nitrate, which is like a battery storing thermal energy for 25 hours.

The heat created at temperatures above 450 degrees Fahrenheit is used for convection cooking outdoors. Fundamatics. Miscellaneous Q and A's about cob building. Q: I am needing to build a home for my son and me. I will not have much budget to work with overall. I want to find out if there is someone who can come and build a home for us such as a cob home? How much is the cost to do this? It would be a simple design home I need a home about average 1600 sq feet?

I am by Dallas Texas. Tribal girls of Hutup are reaching their goals, playing football. Posted 13-Jul-2012 Vol 3 Issue 28 Teenage tribal girls in Jharkhand are the new icons of community leadership and development. Despite their poor physical growth and the hardships they face, these youngsters have donned spikes and taken to the football field in the hope of earning a better living. At Yuwa, a community sports centre on the outskirts of Ranchi, Jharkhand’s state capital, hundreds of local girls are being trained round-the-clock to become professional football players. Ignite NIF. Future solar cells may be made of wood. (Phys.org) —A new kind of paper that is made of wood fibers yet is 96% transparent could be a revolutionary material for next-generation solar cells. Coming from plants, the paper is inexpensive and more environmentally friendly than the plastic substrates often used in solar cells. However, its most important advantage is that it overcomes the tradeoff between optical transparency and optical haze that burdens most materials.

A team of researchers from the University of Maryland, the South China University of Technology, and the University of Nebraska-Lincoln, have published a paper on the new material in a recent issue of Nano Letters. As the researchers explain, solar cell performance benefits when materials possess both a high optical transparency (to allow for good light transmission) and a high optical haze (to increase the scattering and therefore the absorption of the transmitted light within the material). Is a low-priced solar irrigation pump on the horizon? Paul Polak and a team of solar and systems engineers are trying to reimagine the solar irrigation pump, like this one, to reduce its cost for the world's impoverished small-plot farmers. Ten low-tech ways to irrigate crops.

Photo by Stuck in Customs / Flickr Irrigating a farm can double the amount of food it produces. But even with that potential, 80 percent of farmland worldwide is not irrigated, says the UN Food and Agriculture Organization. First instance of ball lightning captured on video and spectrographs. The $200 T-shirt that will fix your bad posture. There are numerous ways the fashion industry is trying to make your clothes smarter. Volunteer, work, intern, organize, hire and connect. Change the world - idealist.org. The secret ingredient for a safer bike helmet: paper. 11 January 2014Last updated at 20:18 ET By Anna Lacey BBC Health Check Could a paper helmet (L) offer more protection than polystyrene (R)?

Lying flat in the middle of the road doesn't usually inspire a eureka moment. But for one man, having a potentially serious bike accident got him thinking about a new future for helmet design. The Electricity-Generating Bicycle Desk That Would Power the World - James Hamblin. The story of Pedal Power's bike machine is spreading quickly. Catapult Design - Home. Meeting the Standard: Tech & the Developing World. Www.cdeep.iitb.ac.in/flvplayer.php?playfile=Anil_gupta. Life Sack Solves Drinking Water Issues for the Third World. In many areas of the world the water crisis is not an issue of scarcity — it’s an issue of providing access to a clean supply. The lack of access to clean water and sanitation kills thousands of people every year, while countless others struggle to meet their basic needs. 6 Water-purifying Devices for Clean Drinking Water in the Developing World. From finance management to helping the rural poor: the journey of Rustam Sangupta.