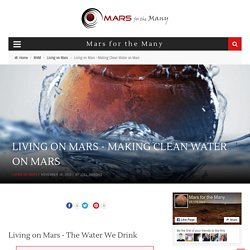 NASA has recently announced evidence of liquid water on Mars. Sounds great! That just makes it easier to live there, right? Not so fast... There may be flowing water, at least during the warmer seasons, but could you actually drink it? ​ Unfortunately - no. The water on Mars is so full of salts, called perchlorates, that it wold be highly toxic to humans and plants. ​ Think of it this way: Water on Mars. An artist's impression of what ancient Mars may have looked like, based on geological data. 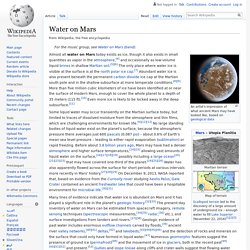 Almost all water on Mars today exists as ice, though it also exists in small quantities as vapor in the atmosphere[1] and occasionally as low-volume liquid brines in shallow Martian soil.[2][3] The only place where water ice is visible at the surface is at the north polar ice cap.[4] Abundant water ice is also present beneath the permanent carbon dioxide ice cap at the Martian south pole and in the shallow subsurface at more temperate latitudes.[5][6][7][8] More than five million cubic kilometers of ice have been identified at or near the surface of modern Mars, enough to cover the whole planet to a depth of 35 meters (115 ft).[9] Even more ice is likely to be locked away in the deep subsurface.[10] Historical background[edit] The notion of water on Mars preceded the space age by hundreds of years. Mariner 4 acquired this image showing a barren planet (1965) Evidence from rocks and minerals[edit]

MARS: How to Survive on Mars. New Desalination Method 'Shocks' the Salt Out. Wouldn't you know it ... 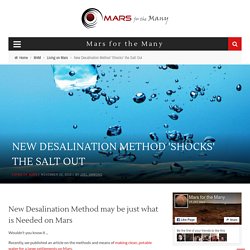 Recently, we published an article on the methods and means of making clean, potable water for a large settlements on Mars. And then this happens. A team at MIT has come up with an innovative approach for desalinating water that is cheaper, faster, and produces more clean water than anything seen before. Martin Bazant Unlike most traditional desalination systems, this new desalination method does not separate ions or water molecules with filters, which can become clogged, or boiling, which consumes great amounts of energy. Instead, the system uses an electrically driven shockwave within a stream of flowing water, which pushes salty water to one side of the flow and fresh water to the other. This allows easy separation of the two streams. ...fundamentally new and different...

This approach is "a fundamentally new and different separation system," Bazant says. As Bazant says: It generates a very strong gradient. As Bazant says. The breakthrough here is the engineering. Water On Mars: Discovery Of Boron Suggests The Planet Once Had Habitable Groundwater. NASA’s Curiosity rover has unearthed fresh evidence that Mars once had plentiful water on its surface. 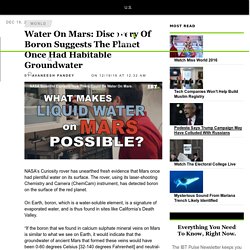 The rover, using its laser-shooting Chemistry and Camera (ChemCam) instrument, has detected boron on the surface of the red planet. On Earth, boron, which is a water-soluble element, is a signature of evaporated water, and is thus found in sites like California’s Death Valley. “If the boron that we found in calcium sulphate mineral veins on Mars is similar to what we see on Earth, it would indicate that the groundwater of ancient Mars that formed these veins would have been 0-60 degrees Celsius [32-140 degrees Fahrenheit] and neutral-to-alkaline pH,” Patrick Gasda, a postdoctoral researcher at Los Alamos National Laboratory in New Mexico, which was involved in the development of the ChemCam instrument, said in a statement last week.

“No prior mission to Mars has found boron.” We already know that Mars, currently a dusty and barren wasteland, was not always so. Enormous Water Ice Deposit Could Help Us Survive on Mars. Martian Water As A Future Resource: Analyses Reveal A Deposit More Extensive In Area Than The State Of New Mexico. Frozen beneath a region of cracked and pitted plains on Mars lies about as much water as what's in Lake Superior, largest of the Great Lakes, researchers using NASA's Mars Reconnaissance Orbiter have determined. 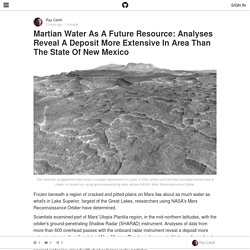 Scientists examined part of Mars' Utopia Planitia region, in the mid-northern latitudes, with the orbiter's ground-penetrating Shallow Radar (SHARAD) instrument. Analyses of data from more than 600 overhead passes with the onboard radar instrument reveal a deposit more extensive in area than the state of New Mexico. The deposit ranges in thickness from about 260 feet (80 meters) to about 560 feet (170 meters), with a composition that's 50 to 85 percent water ice, mixed with dust or larger rocky particles.

At the latitude of this deposit -- about halfway from the equator to the pole -- water ice cannot persist on the surface of Mars today. It sublimes into water vapor in the planet's thin, dry atmosphere. Water on Mars / New Mars Forums. UA-CEAC Prototype Lunar Greenhouse.