An automated mentor and/or a live connection to a real mentor.
Also, a video database of experts telling relevant advice.

Can I be of assistance? Mentoring - XTOL. Mu Lambda 165 for pre-programmed replies (FAQ's) Walk The Web Step By Step. ExTRA Knowledge Management. EPA4109.MOV. Designer Genes. Are these types of genetic modifications realistic? 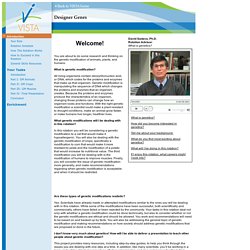 Yes. Scientists have already made or attempted modifications similar to the ones you will be dealing with in this rotation. While some of the modifications have been successful, both scientifically and commercially, others have failed or been rejected by the community. Your tasks in this rotation deal not only with whether a genetic modification could be done technically, but also to consider whether or not the genetic modifications are ethical and should be allowed. You work and recommendations will need to be based on and backed up by facts. I don't know very much about genetics! This project provides many resources, including step-by-step guides, to help you think through the issues you are dealing with one step at a time. How do I get started? Simply click on "Introduction" in the left menu under "Your Tasks. " Note: Students must complete a focus group early in this rotation.

A Child Asks Holocaust Survivor Eva Schloss Questions. Martin Raff - Scientist - Advice to young scientists: Do important science! - Web of Stories. Jim Watson’s view is if, I think it was Jim, if you want… you want to be a great scientist, do important, great science, and although that seems absurd, the point in science is to try to do something important early. 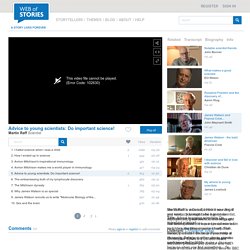 The earlier, the better. Because if you make a discovery, there’s no other way to gain the confidence that you can make a discovery, because when you find something… So when I told you about that first year when we made a discovery that was, actually turned out to be quite important, it took me months before I could see that this was an important discovery, because how could I have made an important discovery, it makes no sense. If I made it, others must have already made it, or probably it’s wrong because I made it. So the only way to get the confidence to know that just because you found it doesn’t mean it’s wrong or that somebody else must’ve found it… is to do it. Sydney Brenner - Scientist - Inside-out genetics gives faster results - Web of Stories. And so our job then... and every classical genetical thing, whether it was in phage or bacteria or C. elegans (Caenorhabditis elegans), and that is the way I began... began with a mutant hunt. 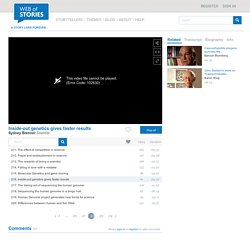 You hunt for mutants and then you classify them. The way you classify mutations is you put them into the same organism and you see whether they complement each other. If they fail to complement you can say those mutations are in the same gene. If they complement, you know you've got different genes. And so you can conduct this exercise and come out and just say well, for movement I think we've got to have at least 10 genes that specify movement because I have 10 genes of paralysed mutants that show lack of movement.

John Maynard Smith - Scientist - Helen Spurway - Web of Stories. Helen, I have to say, I probably learned as much from her as I did from him. 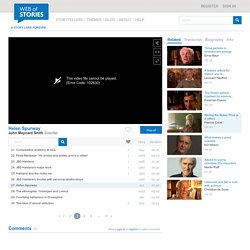 I learnt from Helen the absolute importance of writing down what you see as a scientist, not what you'd like to see or what you hoped to see, but what actually happened, and to write it down at the time and so on. I mean she was a meticulous observer, Helen. Give her an animal and she'd keep it and it would be breeding if you could give her one of each sex, I mean, she was marvellous with animals, she was a marvellous observer. Aaron Klug - Scientist - 'Pusztai affair' and genetically modified crops - Web of Stories. The first GM crops to be made... the first vegetables to be made were tomatoes, they were made by ICI quite a long time ago, and in the early nineties there were tomato paste on sale in British stores made of GM tomatoes, but the point about the GM tomatoes was that they were made for a special purpose. 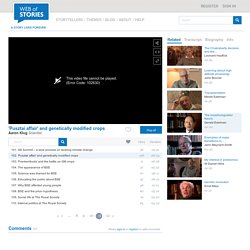 They prolonged the ripening period, and they also... the consistency of the tomato was also less... it was much harder, so you could in fact, it was picked with less damage and there were many other things you could build in. Tomatoes... people had studied what are called quantitative loci in genetics where you have something like the shape of a... or the solidity of tomatoes is governed by about seven different genes.

People study these things, they're called quantitative trait loci, T-R-A-I-T, QTLs, this is a branch of genetics where they try to measure the amount of contribution of given genes are to different things. So now what happened is that the...