Worst Album Covers of All Time 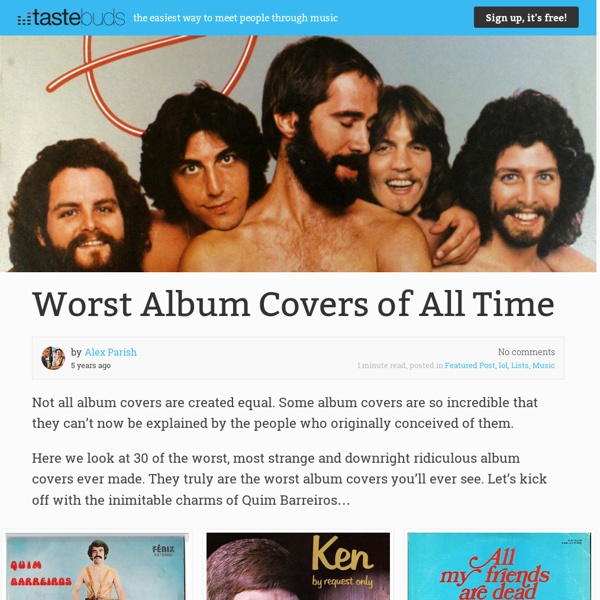 10 Logo Designs Gone Wrong Author: Jennifer Moline @ HONGKIAT Logos define brands and they create corporate images because logos are what sticks in people’s mind and creates associations. Think Coca-Cola, Nike, or McDonald’s – what do you instantly picture in mind? Right, their logos. Great logos will never allow their consumers forget about the brand – it’s what prompts them choose one product over alternative: people tend to stick to something familiar, something that brings up positive associations. While the implementation of an effective logo can set a company up for success, the opposite is also possible.

15 Rebels Who Just CAN'T BE TAMED You're a rebel without a cause. Or one with a cause. We don't know re: your cause-having, because you're so mysterious. Now GO BREAK SOME RULES*. 10 Hilarious Movie Posters With One Letter Removed Published in a Tumblr blog called Removies, the creator of these inventive movie posters basically removed a single letter from the title of a popular movie. This inevitably shifts the movie’s plot drastically. For instance, Finding Nemo becomes Finding Emo, a tale about a depressed, friendless fish in an ocean of 3.7 trillion potential friends. Harry Potter and the Order of the Phoenix becomes Harry Otter and the Order of the Phoenix, the tale of an otter getting served with a restraining order from a fiery bird. The Removies illustrator has altered movie posters for Jurassic Park, Cape Fear, Dawn of the Dead, Rise of the Planet of the Apes, Kill Bill, The Men Who Stare at Goats and Seven Years in Tibet, as well. If you are interested in purchasing prints of the creative movie posters, you can find the Removies store on Big Cartel here.

HUGE Funny Picture Dump (90 Pics!) Some Gordons Bay humour. #FunnySigns. Thanks to Liz Sanders for this snap from a harbour pub. A very help sign - #FunnyPictures #FunnySigns #WhySoSerious Vintage Sleaze: Fleischer Studios Stag Film 1932. Jimmy Culhane Draws "PARTS" and Sex-Drenched Cartoons Vintage Sleaze Fleisher Studio produces animated stag film 1932. Sheesh! "In My Merry Oldsmobile" was a filthy song before the folks who brought you Popeye the Sailor Man created a filthy cartoon to go with it. The song may have been the first to hint women had something under their hood which felt good…"She says she knows why the motor goes, the "sparker" is awfully strong…" Robert Johnson said the same thing in his staggering blues song a few years later, and he was just as clear that it was about a clitoris. The Hellhound says "And when I mash down on your little starter, then your spark plug will give me fire.

Safety Sign Generator The server is working. I'm sorry for the "server busy" messages; the server is working, but if it gets too busy, it gets overloaded, and so you get that message. There's not much I can do about it right now. If you get that message, just be patient and try again later. Welcome to the Safety Sign Generator.