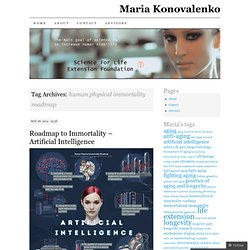 There’s a good chance this technology will be the game changer for the humanity at large. It may define our future. We can write a book about the evolution of different technologies and how they are going to influence human condition and help achieve immortality. This Roadmap can serve as an illustrated table of contents for this book. Like this: Like Loading... Roadmap to Immortality – Nanomedicine I’d like to present part 4 of the Human Physical Immortality Roadmap. Roadmap to Immortality – Cyborgization Here’s a completely different approach to immortality – not thinking about how to restore damaged organs, but replace them with new artificial ones.

Roadmap to Immortality – Cryonics A person is not a transhumanist if they don’t support cryonics. Tech Can Make Immortality a Reality: Head Google Engineer. For example, using 3D bioprinters—which can print the structure of human tissue with biodegradable material—and stem cells, which are used to populate the 3D printed structure—researchers can grow actual human tissue. ( Read More : How 3D Printers Are Reshaping Medicine ) "There's already fantastic therapies to overcome heart disease, cancer and every other neurological disease based on this idea of reprogramming the software," Kurzweil said.

Google's Kurzweil Says Immortality Is Real. Why Google is investing in immortality. Google vs. Death. In person, it can be a little hard to hear Larry Page. 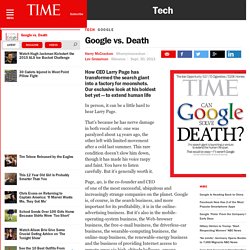 That’s because he has nerve damage in both vocal cords: one was paralyzed about 14 years ago, the other left with limited movement after a cold last summer. This rare condition doesn’t slow him down, though it has made his voice raspy and faint. You have to listen carefully. But it’s generally worth it. Page, 40, is the co-founder and CEO of one of the most successful, ubiquitous and increasingly strange companies on the planet.

Page prefers to refer to Google’s more out-there ventures as moon shots. At the moment Google is working on an especially uncertain and distant shot. Google isn’t exactly bursting with credibility in this arena. It’s worth pointing out that there is no other company in Silicon Valley that could plausibly make such an announcement. New Horizon Google’s fondness for moon shots, and its ability to take them, can be attributed in large part to Page himself. Spring Cleaning The Core Again, he sounds impatient. Google-vs-Death-TIME-360 cover 0930. Google-immort. 190kiommyn6yfjpg. Wendy-goog. Sarah-google.