Paintings of Immortals. He Xiangu. He Xiangu, birth name He Qiong, is a Chinese mythological figure and one of the Eight Immortals in the Taoist pantheon. 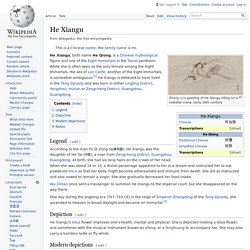 While she is often seen as the only female among the Eight Immortals, the sex of Lan Caihe, another of the Eight Immortals, is somewhat ambiguous.[1] He Xiangu is believed to have lived in the Tang dynasty and was born in either Lingling District, Yongzhou, Hunan or Zengcheng District, Guangzhou, Guangdong. Legend[edit] According to the Xian Fo Qi Zong (仙佛奇蹤), He Xiangu was the daughter of He Tai (何泰), a man from Zengcheng District, Guangzhou, Guangdong. At birth, she had six long hairs on the crown of her head. When she was about 14 or 15, a divine personage appeared to her in a dream and instructed her to eat powdered mica so that her body might become etherealised and immune from death.

Wu Zetian once sent a messenger to summon He Xiangu to the imperial court, but she disappeared on the way there. Depiction[edit] Modern depictions[edit] Tales of the Eight Immortals (click 2x) Content created: 101230File last modified: 160201Go to the first tale. 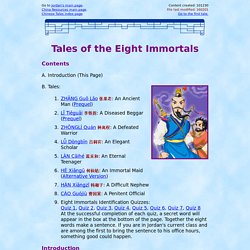 Only three of them were known in secular history (Zhōnglí Quán 钟离权, Zhāng Guǒ 张果, and Lǚ Yán 吕岩). Art Daoist though they may be, they occur as a cheerful decorative motif in the widest variety of contexts. Stories. Chinese Culture and Philosophy. (3 pages total) Daoist (Taoist) immortals are considered "patron saints" of the Daoist belief. 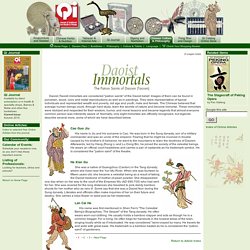 Images of them can be found in porcelain, wood, ivory and metal reproductions as well as in paintings. They were representative of typical individuals and represented wealth and poverty, old age and youth, male and female. The Chinese believed that average human beings could, through hard study, learn the secrets of nature and become immortal. These immortals were idolized and respected for their wisdom, humor, and moral lessons and became legends that almost everyone common person was intimently aware of.

Cao Guo Jiu His name is Jiu and his surname is Cao. He Xian Gu She was a native of Guangzhou (Canton) in the Tang dynasty, where she lived near the Yun Mu River. Lan Cai He His name was first mentioned in Shen Fen's "The Celestial Being's Biographies, The Sequel" of the Tang dynasty. Return to Article Index. Zhang Sanfeng (张三丰)：a semi-mythical Chinese Taoist priest - China culture. Zhang Sanfeng (张三丰) was a semi-mythical Chinese Taoist priest who is believed by some to have achieved immortality, said variously to date from either the late Song Dynasty, Yuan Dynasty or Ming Dynasty. 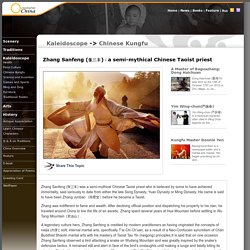 His name is said to have been Zhang Junbao （张君宝）before he became a Taoist. Zhang was indifferent to fame and wealth. After declining official position and dispatching his property to his clan, he traveled around China to live the life of an ascetic. Zhang spent several years at Hua Mountain before settling in Wu Tang Mountain（武当山）. Stories from the 17th century onward give him credit for the internal martial arts. 19th century and later stories give him credit for T'ai Chi Ch'uan.

Zhang Sanfeng is also said to have been versed in Shaolin Gung Fu, an expert in the White Crane and Snake styles of Chinese martial arts, as well as in the use of the Chinese straight sword or jian. Much of the written material about him is mythical, contradictory, or otherwise suspect.