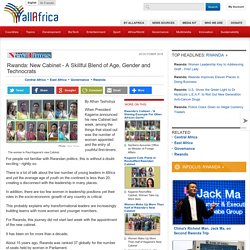 By Athan Tashobya When President Kagame announced his new Cabinet last week, among the things that stood out was the number of women appointed and the entry of youthful first-timers. For people not familiar with Rwandan politics, this is without a doubt exciting - rightly so. Grâce à Israël, le Rwanda à la porte de l’OCDE ? Rwanda Beats African Economic Giants in Latest Global Competitiveness Index - Face2Face Africa. How could a small country with a lean economic muscle like Rwanda outdo well-established African economies like Nigeria and South Africa? 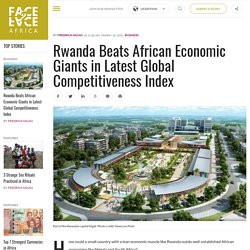 It is the baffling question that economic experts have to grapple with after Rwanda emerged the most competitive African country in the just released Global Competitiveness Index (GCI) report. The index, which analyzes national competitiveness on the basis of the institutions, policies and factors determining the level of productivity, ranks Rwanda at number 58, globally, with a score of 4.35, ahead of African economic giants like South Africa, Nigeria, Egypt, Morocco, and Algeria.

South Africa, the third largest economy in Africa, is the second African country on the list at number 61 with a score of 4.32, followed by its neighbor Botswana at number 63 with a score of 4.30. Rwanda approve law to make Swahili official language - CNBC Africa. Rwanda: MPs Approve Law Making Kiswahili Official Language. By Nasra Bishumba Members of the Lower House yesterday passed the organic law establishing Kiswahili as an official language. 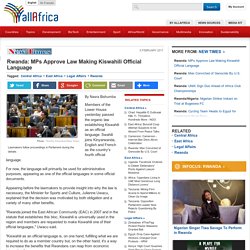 Swahili joins Kinyarwanda, English and French as the country's fourth official language. For now, the language will primarily be used for administrative purposes, appearing as one of the official languages in some official documents. Appearing before the lawmakers to provide insight into why the law is necessary, the Minister for Sports and Culture, Julienne Uwacu, explained that the decision was motivated by both obligation and a variety of many other benefits. Africa: Rwanda is Africa's 3rd Least Corrupt Country.

Photo: New Times A signage encouraging citizens to report any form of corruption in Kigali. 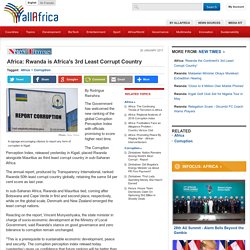 By Rodrigue Rwirahira The Government has welcomed the new ranking of the global Corruption Perception Index with officials promising to score higher next time. Rwanda's Road Map to a Middle Income State by 2050 #NBSFocusOnRwanda. Rwanda: IMF Confident of 6% Growth Prospect for the Country. By Collins Mwai The InternationalMonetary Fund remains positive that Rwanda's economy will achieve the projected 6.0 per cent growth rate in 2016 despite the turbulent global economic times. 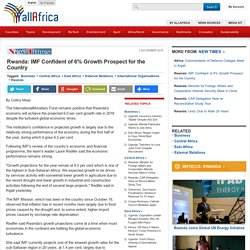 The institution's confidence in projected growth is largely due to the relatively strong performance of the economy during the first half of the year, during which it grew 6.5 per cent. Rwanda Names 22 French Army Officers It Accuses of Aiding Genocide. Photo: Simon Maina/New Times Victims of the 1994 Rwandan genocide at the Genocide Memorial in Nyamata, inside the Catholic church where thousands were slaughtered (file photo) By Edmund Kagire. 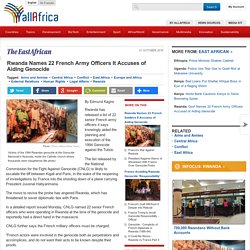 Rwanda, 7th Best-run Nation In The World!! - How Africa News. As we talk about good governance, Africa has consistently ranked last in the global class. 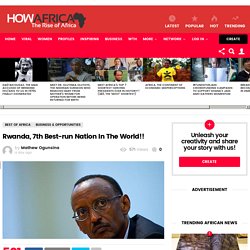 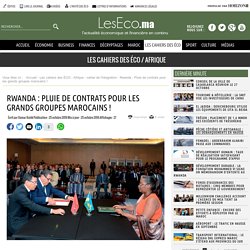 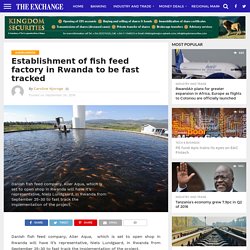 $1.7b ready for Rwanda local companies. Rwanda wants to turn itself into Africa’s Singapore. RWANDA — The tiny nation of Rwanda is pursuing a local technological revolution in a bid to transform its largely agrarian society into the equivalent of an African Singapore. 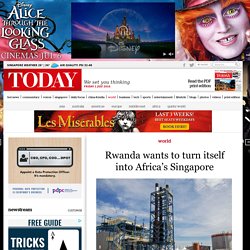 Since President Paul Kagame led his Rwandan Patriotic Front to power in 1994 after a genocide that claimed as many as 800,000 lives and cut economic output in half, the East African nation has pursued policies aimed at encouraging investment in and developing its ICT industry. The goal is for Rwanda to become a middle-income economy by 2020. The latest innovation was unveiled this week when Rwanda officially opened a methane-fired power plant on Lake Kivu to generate clean energy. The government’s commitment to technological innovation has helped double the industry’s contribution to the 1.53 trillion-franc (S$2.7 billion) economy, according to National Institute of Statistics of Rwanda data. The Surprising Story Behind The World's Fastest Developing Country - Pan African Visions. If you guessed Rwanda, you’d be right. Rwanda is a small country located in Eastern Africa bordered by Uganda, Tanzania, Burundi and Democratic Republic of the Congo.

For many foreigners, the country is still associated with the civil war that occurred in 1994. But Rwanda has done an exemplary job putting its past behind with a commitment to democracy, justice, reconciliation, and development. Could cashless payments make Rwanda's bus conductor redundant? Image copyright AC Group Rwandan buses are among the first in Africa to switch to cashless payment. Chris Matthews asks what will become of the bus conductor. Snaking through the green streets of Kigali, as a stream of motorbike taxis, known as motos, fly along the hilly roads, the 109 bus is making its familiar route west to the suburb of Gikondo.

It is early afternoon and the bus is full, a group of school children are picked up en route, an elderly man is offered a seat as he joins the busy service and, while the route may be the same, boarding is not. The 109 bus is one of a growing number of services and one of more than 130 buses in the Rwandan capital to have introduced cashless payments.

Rwf6.5b Rubavu warehouse to ease cross-border trade. The Government of Rwanda has signed a partnership deal with Alpha Logistics Limited to construct a modern bonded warehouse at Petit Barrière, Rubavu District in the Western Province. The $8.6 million (Rwf6.5 billion) facility is part of government’s strategy to boost the country’s logistics industry and promote cross-border trade, according to the Trade and Industry Minister, Francois Kanimba. Kanimba said the concessional agreement will see Alpha Logistics design, construct, finance, operate and maintain the facility for 20 years. Rwandan genocide tribunal closes. In Rwanda in 1994, Hutu extremists, incited by hate speech on local media, started slaughtering minority Tutsis and moderate Hutus. Within a 100 days between 800,000 and 1 million people were systematically hunted down and murdered.

The rest of the world looked on in horror, but did nothing. It was one of the worst crimes ever committed. After it was over, the international community decided that it had to respond and show that international justice was not an unattainable vision. Rwanda's millennium village. Le premier aéroport pour drones au Rwanda ? Le cabinet d’architectes Foster + Partners, qui s’occupe de la création du campus soucoupe volante d’Apple et qui a signé le premier terminal commercial spatial pour Virgin Galactic, va construire un aéroport pour drones ou ‘droneport’ au Rwanda d’ici 2020.

CNN Video - Breaking News Videos from CNN.com. Cross_Border_Trade_Strategy_Draft_for_Validation.pdf. USAID-EAT%20Cross-Border%20Trade%20Analysis%20Rwanda.pdf. Rwanda to fast-track cashless society. | Oct. 29, 2014, 7:32 p.m. Image: By BiztechAfrica. Uganda: One Million Rwandans Graduate Out of Poverty. For the last 18 years, Esperance Nyiramahoro, 34, had tried every job but without much luck in overcoming poverty. Life was hard; she was barely able to get enough to keep her family afloat.