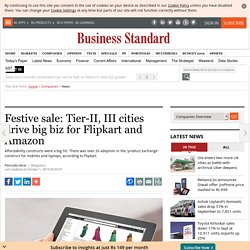 Walmart-owned Flipkart on Monday night said tier-II and tier-III cities ushered in the festive cheer for the firm during the second day of its flagship event ‘The Big Billion Days’ 2019. Electronics category witnessed growth of over 70 per cent from tier-II cities, with a 100 per cent increase in women shoppers from smaller towns. “We witnessed the growing appetite of tier II and III cities for mobiles, large appliances and consumer electronics,” said Kalyan Krishnamurthy, CEO, Flipkart. “As consumers from these cities upgrade, they are coming at par with the metros showcasing unique needs and spending patterns across these categories,” added Krishnamurthy. Affordability constructs were a big hit. For Flipkart mobiles saw the share of consumers picking premium smartphones increased by 97 per cent. BPCL to SCI, group of secretaries clears strategic stake sale in five PSUs.

The government has set the ball rolling on strategic sales, with a group of secretaries on Monday clearing disinvestment in five public sector undertakings (PSUs), which may fetch over Rs 60,000 crore and keep the fiscal deficit in check. 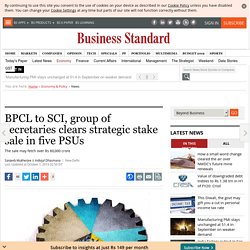 This would account for around 60 per cent of Rs 1.05 trillion budgeted from disinvestment in the current financial year. Disinvestment in Bharat Petroleum Corporation (BPCL), Shipping Corporation of India (SCI), Concor, North Eastern Electric Power Corporation (NEEPCO), and THDC would help the Centre keep its fiscal deficit in check in the wake of subdued tax revenues and a Rs 1.45-trillion hit for the exchequer from corporation rate cuts. All the five companies may not go to private hands because there are options to sell them to other public sector units. However, if private firms buy them, it would be the biggest such exercise since the days of the Atal Bihari Vajpayee government. A Cabinet note will be prepared for these five companies. HDFC Bank is the most valued brand in India, LIC takes second spot: Survey. HDFC Bank beat the crowds to top the list of 75 most valued brands in India, keeping its position intact from the previous year. 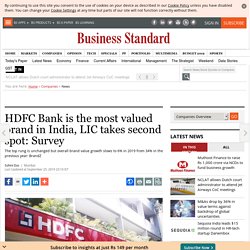 At second and third spots, too, the old order held its grip. Public sector insurer Life Insurance Corporation of India (LIC) and IT major Tata Consultancy Services (TCS) retained their second and third ranks in the list of most valued Indian brands. The big change, however, has been in the overall growth of brand values in the BrandZ 2019 Most Valuable Indian Brands, a report by WPP and Kantar Millward Brown. The total value of the top 75 brands increased to $228.2 billion, growing at a moderate 6 per cent over 2018, far slower than 34 per cent recorded the previous year.

The report calculates valuations and ranking by combining companies’ financial data with consumer insight and opinion. While brands grappled with many challenges this year, a few managed to push valuations up significantly. Finally, Apple iPad gets its own iPadOS: Compatible devices and what's new. American technology company Apple Inc on Tuesday rolled out the iPadOS for the iPad Air 2 (and later versions), all iPad Pro models, iPad 5th generation (and later models), and iPad mini 4 (and later models). 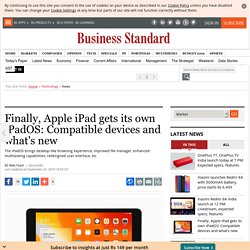 Announced in May at the Apple’s worldwide developer conference, the iPadOS brings new tools and features to iPads, which were until now using the iOS. The new operating system for iPads brings a desktop-like browsing experience, improved file manager, enhanced multitasking capabilities, redesigned user interface, etc. Here is what is new in the iPadOS: Home Screen The iPadOS brings a redesigned home screen with a new layout to show more apps and information at a glance. Multitasking with 'Split View' and 'Slide Over' With new Split View and Slide Over feature, the iPadOS makes it easy to work on multiple files and documents, and using the same app for multiple purpose. New capabilities for Apple Pencil Apple Pencil features are integrated in the iPadOS to make it feel more natural. Trump to join PM Modi in Indian-American event in Houston, says White House. US President Donald Trump will join Prime Minister Narendra Modi at Houston's mega "Howdy, Modi! 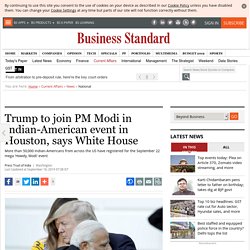 " event on September 22, the White House said on Sunday. Reflecting on the new bonhomie in the India-US ties under the Trump administration, this is for the first time in recent history that the leaders of the two largest democracies would be addressing a joint rally anywhere in the world. More than 50,000 Indian-Americans from across the US have registered for the September 22 mega "Howdy, Modi! Shared Dreams, Bright Futures" event to be held at the sprawling NRG Stadium in Houston. "Howdy", short for 'How do you do? ' In a statement, White House Press Secretary Stephanie Griesham said, "It (Modi-Trump joint rally) will be a great opportunity to emphasize the strong ties between the people of the United States and India, to reaffirm the strategic partnership between the world's oldest and largest democracies, and to discuss ways to deepen their energy and trade relationship.