Colds and Flu. Scientists Find Long-Sought-After Mechanism that Creates Immunity to Influenza A Virus. An international team of researchers from Australia, China and the United States has shown for the first time that RNA interference is active in the response of human cells to some important viruses, including influenza A virus. 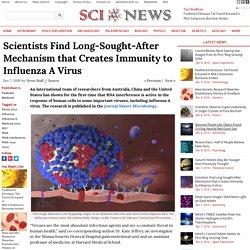 The research is published in the journal Nature Microbiology. This image illustrates the beginning stages of an influenza infection and shows what happens after the influenza viruses enter the human body. Immunity to 'Influenza A' Virus Mechanism Finally Found By Scientists. (Photo : Joe Raedle / Getty Images) FORT LAUDERDALE, FL - JANUARY 06: Gautam Gupta receives an influenza shot from Nurse Practitioner Ray Grigorio in the MinuteClinic at the CVS/pharmacy on January 6, 2014 in Fort Lauderdale, Florida. 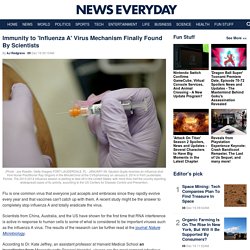 The 2013-2014 influenza season is starting to take off in the United States, with more than half the country reporting widespread cases of flu activity, according to the US Centers for Disease Control and Prevention. Flu is one common virus that everyone just accepts and embraces since they rapidly evolve every year and that vaccines can't catch up with them. A recent study might be the answer to completely stop influenza A and totally eradicate the virus. Should I Get the Flu Shot? CDC Data Raise Concerns. Dec. 4 to Dec. 10 is "National Influenza Vaccination Week" and the Centers for Disease Control and Prevention (CDC) is pushing hard for children and adults to get immunized against the flu. 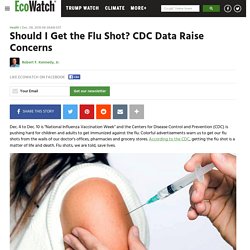 Colorful advertisements warn us to get our flu shots from the walls of our doctor's offices, pharmacies and grocery stores. According to the CDC, getting the flu shot is a matter of life and death. Flu shots, we are told, save lives. At the same time, government officials have been lamenting that influenza vaccination rates are concerningly low in the U.S. and seem to be falling. Fewer than 50 percent of Americans currently heed the government's call to get their annual flu shot. Part of the reluctance seems to stem from questions about efficacy, raised by data coming directly from the CDC.

In February the CDC revealed that the 2014-2015 influenza vaccine had an efficacy rate of only 19 percent. "Read the Cochrane review. CDC data suggest flu shots may take more lives than they save. Influenza (Flu) Seasonal Influenza (Flu) - Key Facts About Influenza (Flu) & Flu Vaccine. What is Influenza (also called Flu)? 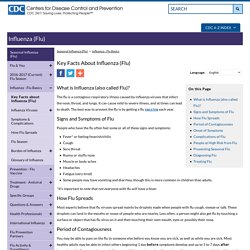 The flu is a contagious respiratory illness caused by influenza viruses that infect the nose, throat, and lungs. It can cause mild to severe illness, and at times can lead to death. The best way to prevent the flu is by getting a flu vaccine( each year. Signs and Symptoms of Flu People who have the flu often feel some or all of these signs and symptoms: Fever* or feeling feverish/chills Cough Sore throat Runny or stuffy nose Muscle or body aches Headaches Fatigue (very tired) Some people may have vomiting and diarrhea, though this is more common in children than adults. *It’s important to note that not everyone with flu will have a fever. How Flu Spreads Most experts believe that flu viruses spread mainly by droplets made when people with flu cough, sneeze or talk.

Period of Contagiousness You may be able to pass on the flu to someone else before you know you are sick, as well as while you are sick. Onset of Symptoms. The World-Changing Power of the Flu. 1918 Killer Flu Reconstructed. Influenza. Overview. 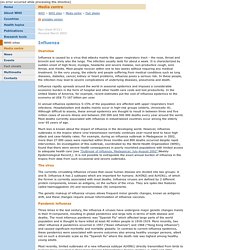 Spanish Flu Pandemic - 1918 - History - Interviews - Aftermath - Worst Disasters. Initially called "the three day fever," it started like any flu, with a cough and a headache, followed by intense chills and a fever that could quickly hit 104 degrees F. 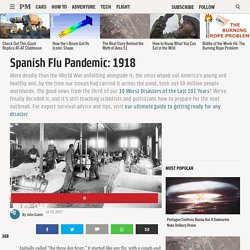 It could take a month before survivors felt completely well, and after they emerged from an energy-sapped stupor many said it felt as though they'd been aggressively hit with a club. But for those 650,000 Americans who actually died from the Spanish flu in 1918, the suffering was much worse. Advertisement - Continue Reading Below. The Influenza Epidemic of 1918. Hard as it is to believe, the answer is true. 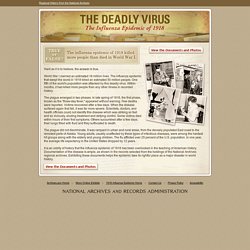 World War I claimed an estimated 16 million lives. The influenza epidemic that swept the world in 1918 killed an estimated 50 million people. One fifth of the world's population was attacked by this deadly virus. Within months, it had killed more people than any other illness in recorded history. The plague emerged in two phases. Contagion, Spanish Influenza in North America, 1918–191. The Spanish influenza pandemic, which began in 1918, caught every nation by surprise. 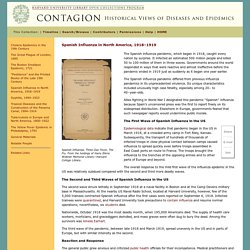 It infected an estimated 500 million people and killed 50 to 100 million of them in three waves. Governments around the world responded in ways that were reactive and almost ineffective before the pandemic ended in 1919 just as suddenly as it began one year earlier. The Spanish influenza pandemic differed from previous influenza pandemics in its unprecedented virulence. Its unique characteristics included unusually high case fatality, especially among 20– to 40–year-olds.

1918 Flu Pandemic - Facts & Summary. The first wave of the 1918 pandemic occurred in the spring and was generally mild. 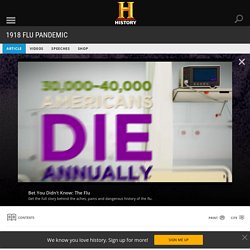 The sick, who experienced such typical flu symptoms as chills, fever and fatigue, usually recovered after several days, and the number of reported deaths was low. However, a second, highly contagious wave of influenza appeared with a vengeance in the fall of that same year. Victims died within hours or days of their symptoms appearing, their skin turning blue and their lungs filling with fluid that caused them to suffocate. Influenza (Flu) Flu: MedlinePlus. Flu Center. Overview - Influenza (flu) Influenza is a viral infection that attacks your respiratory system — your nose, throat and lungs. 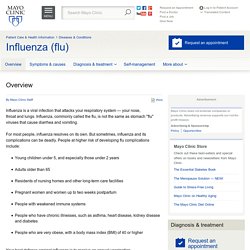 Influenza, commonly called the flu, is not the same as stomach "flu" viruses that cause diarrhea and vomiting. For most people, influenza resolves on its own. But sometimes, influenza and its complications can be deadly. People at higher risk of developing flu complications include: Young children under 5, and especially those under 2 yearsAdults older than 65Residents of nursing homes and other long-term care facilitiesPregnant women and women up to two weeks postpartumPeople with weakened immune systemsPeople who have chronic illnesses, such as asthma, heart disease, kidney disease and diabetesPeople who are very obese, with a body mass index (BMI) of 40 or higher Your best defense against influenza is to receive an annual vaccination. Rx for Survival . Deadly Diseases . Influenza. In the world of human afflictions, the general public often overlooks influenza, considering it an unwanted guest that must be endured during the winter months.

But few diseases match the year-in, year-out power of this deadly viral infection. Each year it takes the lives of about 37,000 people in the United States and between 250,000 and 500,000 worldwide. While that toll is significant enough, influenza always has the potential to turn far more lethal, because the viruses can mutate rapidly into new strains. To public health officials, flu tops the list of diseases that could cause a pandemic — a global epidemic. About Pandemics. A pandemic is a global disease outbreak. It is determined by how the disease spreads, not how many deaths it causes. When a new influenza A virus emerges, a flu pandemic can occur. Because the virus is new, the human population has little to no immunity against it.