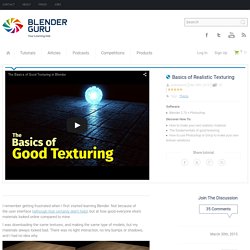 Not because of the user interface (although that certainly didn’t help), but at how good everyone else’s materials looked online compared to mine. I was downloading the same textures, and making the same type of models, but my materials always looked bad. There was no light interaction, no tiny bumps or shadows, and I had no idea why. It would take me years of failing before finally discovering the answer: it’s all about the texture variations.

I made a tutorial on this topic a year ago, but it was a little long and used Crazybump. …besides, since Cycles Material Nodes was voted as your #1 struggle for 2015 I figured another tutorial couldn’t hurt ;) Final Result In this tutorial you’ll be taking a texture and creating some variations of it, using Photoshop (or Gimp if you prefer), then putting them into Blender like this: …to create a much more realistic tutorial. How to Make Realistic Rust. 1. 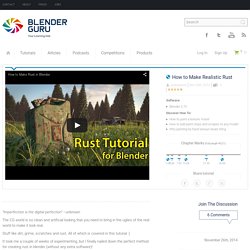 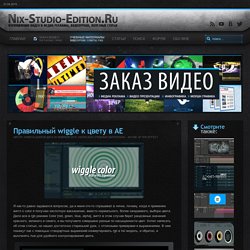 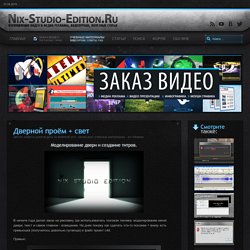 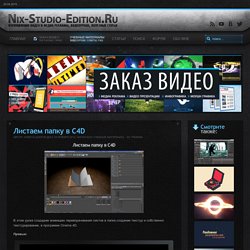 Press Release: Arnold 4.2 Sets New Performance Standards. Solid Angle to showcase Arnold 4.2 with Cinema4D and Houdini plug-ins at SIGGRAPH MADRID & LONDON, 31 July, 2014 – SOLID ANGLE will be in force at SIGGRAPH to showcase the latest version of its Arnold renderer, which is delivering significant speed gains over previous versions. 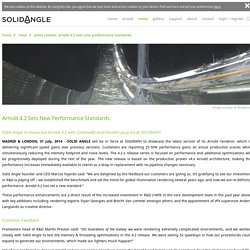 Beeple - the work of mike winkelmann (cinema 4d project files, free vj loops etc.) Thomas Davis Freelance website developer and motion graphics designer based in Manchester. Ever since Adobe added Cinema 4D to After Effects I've been trying to use it more and more in my motion graphics work. 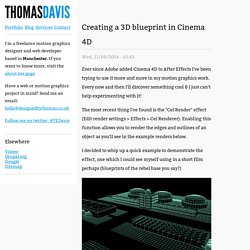 Every now and then I'll discover something cool & I just can't help experimenting with it! The most recent thing I've found is the "Cel Render" effect (Edit render settings > Effects > Cel Renderer). Enabling this function allows you to render the edges and outlines of an object as you'll see in the example renders below. I decided to whip up a quick example to demonstrate the effect, one which I could see myself using in a short film perhaps (blueprints of the rebel base you say?) A fire escape ladder I spent a bit too much time on. And finally the models in gif form! Advanced Sketch and Toon tutorial available! Advanced Sketch and Toon tutorial available! 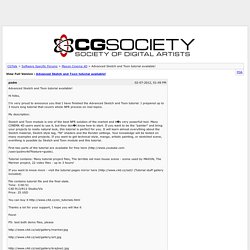 Hi folks, I'm very proud to announce you that I have finished the Advanced Sketch and Toon tutorial. Homepage - DVD/english stuff. Zpět na DVD ZDE REM: You will get your download link to your mail within 24 hours after your payment (please check your spam bin also). 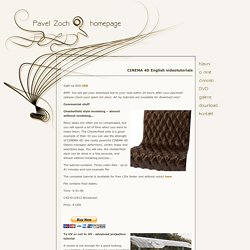 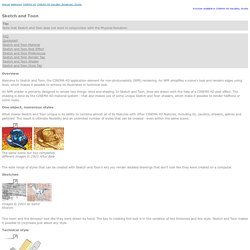 Overview Welcome to Sketch and Toon, the CINEMA 4D application element for non-photorealistic (NPR) rendering. An NPR simplifies a scene’s look and renders edges using lines, which makes it possible to achieve en illustrated or technical look. An NPR shader is primarily designed to render two things: lines and shading. One object, numerous styles What makes Sketch and Toon unique is its ability to combine almost all of its features with other CINEMA 4D features, including GI, caustics, shaders, splines and particles! Creating Line Art Animations Using Cinema 4D’s Sketch and Toon. In this tutorial I’m going to show you how you can use Cinema 4D and Sketch and Toon to apply the popular line art styles to your 3D objects. Sketch and Toon is a fairly deep module in C4D but I’ll cover all you need to know to be able to achieve this line art style look.

I’ll show you everything from how to flatly texture your object to how to apply strokes to your objects and even splines. I’ll also demonstrate how to use Sketch Style Tags to be able to apply specific styles and sketch materials to individual objects in your scene. Stay up to date with the latest Cinema 4D tutorials by signing up to the Eyedesyn newsletter! Related. NAB 2015. Sedia sketch cinema 4d. Creating Line Art Animations Using Cinema 4D’s Sketch and Toon.

Watch Cinema4D Advanced Production Techniques 2 Online. Camera Mapping Basics Using Projection Man. We have visited camera mapping in Cinema 4d at lesterbanks here more than once, and typically every time I come across another tutorial that demonstrates the ease, flexibility and the genius of using C4D’s Projection Man solution, I post it because it can bear repeating. CINEMA 4D Tutorials > Bringing a Still Image to Life Using Projection Man in CINEMA 4D Tutorial. Corridor Projection Man Tutorial 10. Home / Blog / Tutorial 10 – The Corridor Photoshop File: C4D Corridor File Start: C4D corridor File Finish: Difficulty: Medium Hi everyone and welcome back to Renderready.com. Today, we go over Projection Man and how to use it to build a scene in 3D that would take forever using materials/shaders/rendering time.

You can download the files above but watch the video to give you a step-by-step walkthrough on how to work within Projection Man. To start off, Projection Man is a plugin built by Maxon that is the beefier cousin to camera mapping. To set up your PSD file, you need to slice up your image into layers based on Z-depth, starting with the closest elements that are seamless objects. There are several things you should do prior to starting your projection. Once you get your camera lined up, add a protection tag to it so it doesn’t move. Once all the object are in the scene, move to the protected camera and STAY ON THAT CAMERA NO MATTER WHAT. Intro to Projection Man in Cinema 4D. What is Projection Man? Projection Man is a tool that was originally created exclusively for Sony Pictures Imageworks and for awhile was only available for studios to use – It was used on such films as Polar Express and Beowulf. Since R11 Maxon started including Projection Man in public releases so anybody could use it.

CINEMA 4D Tutorials > Bringing a Still Image to Life Using Projection Man in CINEMA 4D Tutorial > Digital-Tutors. Camera Mapping Basics Using Projection Man. Magic SlowMotion. Description :MagicSlowMotion description With this plugin you can make very easy slow motion effect in dynamis also there is spline you can control the easy in and out is very simple just made new object and select the start and stop in the sec you have nice effects slow motion . work great with thrausi,catastorphe,nitroblast to make slowmotion fractue effects System : Win and Mac 32,64 bit Cinema4D : R13,R14,R15 Version : Broadcast , Studio Avalable Verion : 1.05 How Install : Unzip the File and put the new folder in maxon/cinema4d/plugins.

Free C4D Plugin: Nitro 4D Magic Slow Motion. Wall textures with crackles. Free Grunge Textures. Categories Colors Bookmark. Grunge Textures from TextureKing. Non-Commercial RenderMan - Install. Next you'll download and run the installer for Non-Commercial RenderMan (NCR). The installer will prompt you for your User Name and Password for the RenderMan Forums, so have that information ready. Make sure you follow the following instructions. ▶ Important: You must be currently logged into the Forums to download the software. If you are not already logged in, you can Log into the Forums Now in a new window.

When you have logged in, please proceed by clicking the "Download Installer" button below. Once the installer (about 10mb) has successfully downloaded, simply run the installer and follow the instructions ... Non-Commercial. Now Available! RenderMan is now free for all non-commercial purposes, including evaluations, education, research, and personal projects. The non-commercial version of RenderMan is fully functional without watermark or limitation.

For further details please refer to Pixar's Non-Commercial RenderMan FAQ. More Like Cinema4D Reflective Materials Pack (Free Download) by Amikafy. 7Dimension: July 2011. Coming soon Hi in this post i want to present my new coming soon item, it's a pack of realistic planets that i made them using Cinema4D,this pack includ more than 20 PNG file for all our solar systeme planets,this high resolution images veru useful for your web backgrounds,flyers,posters,BC,Spaceart,Powerpoint presentations and so mush more. 5 key elements to relalistic studio lighting: 1) Use Area Lights 2) Use Area Shadows 3) Choosing Light Falloff 4) Use a plane with luminance for re… C4DUnlimited - DeviantArt. C4DUsers on deviantART. Studio Kit for Cinema 4D – Free Download. Free HDRI CD collection from EVERMOTION. Free HDRI CD collection from EVERMOTION EVERMOTION gives you an unique chance to download free collection of hdri maps, which you can burn on CD.

It is non tested hdri maps done by Evermotion team. Cinema4D - Matte Materials Pack by Amikafy on DeviantArt. Tutorials - Greyscalegorilla Blog. Tutorials - 3D Scenery & Landscape Tools for Cinema 4D. Watch Cinema4D Advanced Production Techniques 2 Online. Human face topology. Cinema 4D Training by 3D Fluff. Все видеоуроки по Cinema 4D и BodyPaint. Easy way to proportionally scale multiple objects in one go? A useful addition would be an option for resizing without altering the object's Scale values. I like to leave these alone unless animating the size of an object. Yep, but then it gets complicated. :) There are three options for this: scale, scale points (multiplying by a matrix), set parameters.

For everything, scale works. For point objects (SplineObject, PointObject, or PolygonObject), scale and scale points works. So, the 'easy' way (albeit less acceptable) is to set the scale. Maybe I'll look into the best way after I've settled from my move. Robert. Www.3dkiwi.co.nz. Mi-24 Helicopter Texturing Basics and UVs Tutorial. Creativmotion. Cinema 4D HDR Lighting Fundamentals Tutorial. Liked this video ? Don't forget to rate. How to Create a 3D write-on effect in Cinema 4D.