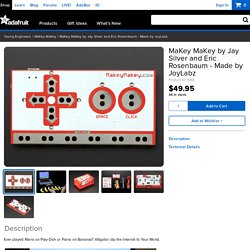 Alligator clip the Internet to Your World. MaKey MaKey is an invention kit for the 21st century. Turn everyday objects into touchpads and combine them with the internet. It's a simple Invention Kit for Beginners and Experts doing art, engineering, and everything in between. MaKey MaKey was invented by Jay Silver and Eric Rosenbaum & Made by JoyLabz.

What Can I Make? Or let's say you Google for an online Pacman game and draw a joystick with a pencil. The kit includes everything you need: MaKey MaKey, Alligator Clips, USB Cable. How Does it Work? When you touch the apple, you make a connection, and MaKey MaKey sends the computer a keyboard message. The best stats you've ever seen - Hans Rosling. Rosling is a passionate advocate for “liberating” publicly-funded data on the Internet. 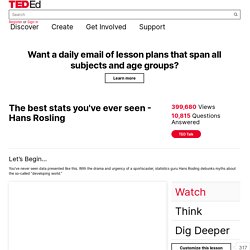 Select one topic area for which country-specific data might be compared (e.g., education, health, food production, the environment, etc.), and identify what you think are the best sources of data in this area on the Internet. Create a guide that lists these sources, and provides a brief review of each. If the administrators of these data repositories are thinking about how users might engage with the data via mobile devices or social media, note this in the review. If the administrators currently aren’t doing anything in these areas, how could mobile devices and social media enhance the user’s experience? Here are a few resources to make learning statistics an interesting experience. Someone always asks the math teacher, "Am I going to use calculus in real life? " Neil DeGrasse Tyson on Bill O'Reilly.

The Lucifer Effect by Philip Zimbardo. Replications and Extensions of the Stanford Prison Experiment efore we explore a range of examples of how far the SPE has traveled in the social science and general public realms, I need to present briefly a criticism of our study from one of my early idols, Erich Fromm. 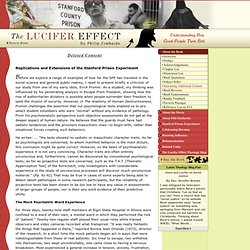 As a student, my thinking was influenced by his penetrating analysis in Escape From Freedom, showing how the rise of authoritarian dictators is possible when people surrender their freedom to seek the illusion of security. However, in The Anatomy of Human Destructiveness, Fromm challenges the assertion that our psychological tests enabled us to pre select student volunteers who were "normal" without any evidence of pathology. From his psychoanalytic perspective such objective assessments do not get at the deeper aspect of human nature. He believes that the guards must have had sadistic tendencies and the prisoners masochistic ones--to begin with, rather than situational forces creating such behaviors.

BJSP (2006) Zimbardo commentary.pdf. BJSP (2006) Zimbardo commentary.pdf. Eva Vertes: Meet the future of cancer research. How to find the best research paper topics. Free Beer: The truth about dishonesty. Hans Rosling: The best stats you've ever seen. Hans Rosling: Let my dataset change your mindset. Hans Rosling: Religions and babies. Kary Mullis: Play! Experiment! Discover! Dr. Kary Banks Mullis. The benefits of science Advice to Young Scientists One of the nicest things about winning the Nobel Prize is that you can divert your interests in any direction that you are serious about, even if it is not the same thing that you have been successful with in the past. 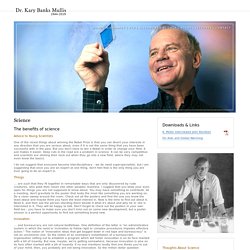 But you don't have to win a Nobel in order to change your field. It just makes it easier. Deep ruts in the road are a problem in science. I do not suggest that everyone become interdisciplinary - we do need superspecialists, but I am suggesting that once you are an expert at one thing, don't feel that is the only thing you are ever going to be an expert in. Things ... are such that they fit together in remarkable ways that are only discovered by rude creatures, who poke their noses into other peoples' business. Innovation ... and bureaucracy are not natural bedfellows. Creativity ... is when you are trying to figure something out and something else keeps intruding.

Conversation With John Bardeen Thoughts About Science. Climate misinformer: Kary Mullis. Do not respect authority. I’m sorry to inflict this on you, and it’s OK if you decide not to torture your brain watching it. 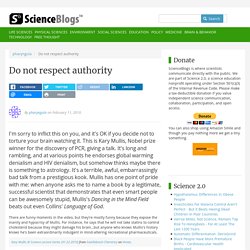 This is Kary Mullis, Nobel prize winner for the discovery of PCR, giving a talk. It’s long and rambling, and at various points he endorses global warming denialism and HIV denialism, but somehow thinks maybe there is something to astrology. It’s a terrible, awful, embarrassingly bad talk from a prestigious kook. Mullis has one point of pride with me: when anyone asks me to name a book by a legitimate, successful scientist that demonstrates that even smart people can be awesomely stupid, Mullis’s Dancing in the Mind Field beats out even Collins’ Language of God. There are funny moments in the video, but they’re mostly funny because they expose the inanity and hypocrisy of Mullis. The student and the professor who are willing to argue with the credentialed buffoon are the only shining lights in this depressing spectacle.