The Reading Brain – The Frontal Cortex. Beyond Broca and Wernicke - Language/Brain. Aphasia and non-verbal intelligence in brain tumour patients. The Influence of Aphasia and of the Hemispheric Side of the Cerebral Lesion on Abstract Thinking. Clinica delle Malattie Nervose e Mentali, Università di Milano Available online 29 May 2013 Choose an option to locate/access this article: Check if you have access through your login credentials or your institution Check access Get rights and content A modified version of Weigl Sorting Test which allows 5 criteria of classification was administered to 40 control patients, 40 right brain-damaged patients, 22 left non-aphasic brain-damaged patients and 45 aphasics. 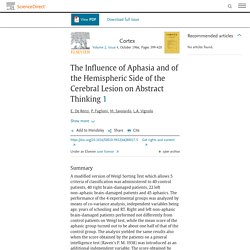 In conclusion, these data indicate that Weigl test is not sensitive to the presence of cerebral damage per se while it is highly sensitive to the presence of left (dominant) hemisphere lesions associated with aphasia. Disorders of Language - CIBA Foundation Symposium. INTELLIGENCE AND LEFT HEMISPHERE DISEASE THE ROLE OF APHASIA, APRAXIA AND SIZE OF LESION. Wais Performance IQ in Aphasia as a Function of Auditory Comprehension and Constructional Apraxia. Grammar Errors? The Brain Detects Them Even When You Are Unaware. Your brain often works on autopilot when it comes to grammar. 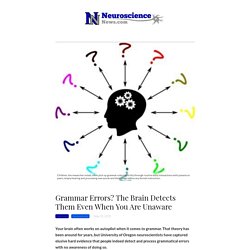 That theory has been around for years, but University of Oregon neuroscientists have captured elusive hard evidence that people indeed detect and process grammatical errors with no awareness of doing so. Participants in the study — native-English speaking people, ages 18-30 — had their brain activity recorded using electroencephalography, from which researchers focused on a signal known as the Event-Related Potential (ERP).

This non-invasive technique allows for the capture of changes in brain electrical activity during an event. In this case, events were short sentences presented visually one word at a time. Subjects were given 280 experimental sentences, including some that were syntactically (grammatically) correct and others containing grammatical errors, such as “We drank Lisa’s brandy by the fire in the lobby,” or “We drank Lisa’s by brandy the fire in the lobby.” Notes about this neuroscience research Sponsored link. Agrammatic%20Overview.PDF. Agrammatic%20Overview.PDF. The neural correlates of agrammatism: Evidence from aphasic and healthy speakers performing an overt picture description task.

The Development of Language: A Critical Period in Humans - Neuroscience - NCBI Bookshelf. Neural Pathways of Word Learning. European scientists reporting in the journal Proceedings of the National Academy of Sciences have identified how unique neural pathways in the brain allows humans to learn new words. 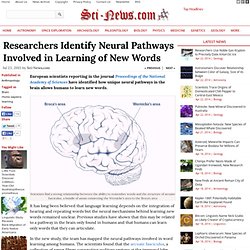 Scientists find a strong relationship between the ability to remember words and the structure of arcuate fasciculus, a bundle of axons connecting the Wernicke’s area to the Broca’s area It has long been believed that language learning depends on the integration of hearing and repeating words but the neural mechanisms behind learning new words remained unclear. Previous studies have shown that this may be related to a pathway in the brain only found in humans and that humans can learn only words that they can articulate. In the new study, the team has mapped the neural pathways involved in word learning among humans. The researchers involved 27 participants. “This research reinforces the need for us to maintain the oral tradition of talking to our children.” Language and Linguistics: Language Acquisition. No Nonsense:Babies Recognize Syllables Babies are born into a world buzzing with new noises. 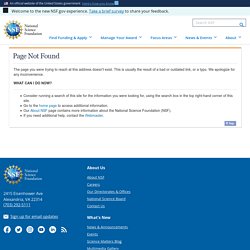 How do they interpret sounds and make sense of what they hear? University of Wisconsin, Madison, researcher Jenny Saffran strives to answer these types of questions by studying the learning abilities “that babies bring to the table” for language acquisition. “Studying learning gives us the chance to see the links between nature and nurture,” says Saffran. One thing babies must learn about language is where words begin and end in a fluid stream of speech. In her studies, Saffran introduced babies to a simple nonsense language of made-up, two-syllable words spoken in a stream of monotone speech.

Saffran’s research suggests babies readily identify patterns in speech and can even evaluate the statistical probability that a string of sounds represents a word. For details about Saffran’s research and experimental methods, click here. Credit: Jeff Miller, University of Wisconsin, Madison. Natural selection of the critical period for language acquisition - ProcRoySoc01a.pdf.