SimonPenny.net. Simon Penny is an artist, theorist and teacher with a longstanding focus on emerging technologies and on embodied and situated aspects of artistic practice. 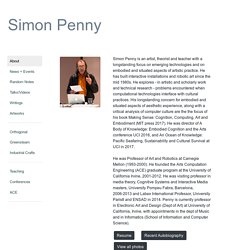 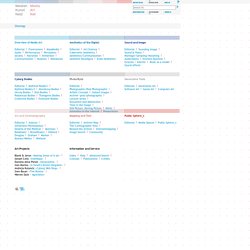 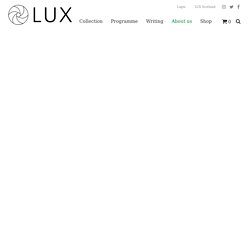 Founded in 2002 as a charity and not-for-profit limited company, the organisation builds on a long lineage of predecessors (The London Film-Makers’ Co-operative, London Video Arts and The Lux Centre) which stretch back to the 1960s. The only organisation of its kind in the UK, LUX represents the country’s only significant collection of artists’ film and video, and is the largest distributor of such work in Europe. LUX works with a large number of major institutions including museums, galleries, festivals and educational establishments, as well as directly with the public and artists. STARTS PRIZE. Petites Planètes. RealTime — Australia. REWIND. REWIND is a research project (2004 - ongoing) , that provides a research resource to address the gap in historical knowledge of the evolution of electronic media arts in the UK, by investigating specifically the first two decades of artists’ works in video. 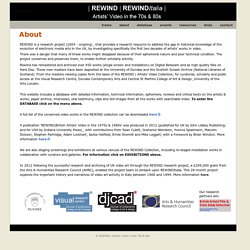 There was a danger that many of these works might disappear because of their ephemeral nature and poor technical condition. The project conserves and preserves them, to enable further scholarly activity. Rewind has remastered and archived over 450 works (single screen and installation) on Digital Betacam and as high quality files on Hard Disc. These new masters have been deposited at the University of Dundee and the Scottish Screen Archive (National Libraries of Scotland). This website includes a database with detailed information, technical information, ephemera, reviews and critical texts on the artists & works, paper archive, interviews, oral testimony, clips and still images from all the works with searchable index. Videographe's collection. British Artists' Film and Video Study Collection – UAL. Untitled. The Frank-Ratchye STUDIO for Creative Inquiry at Carnegie Mellon University is a laboratory for atypical, anti-disciplinary, and inter-institutional research at the intersections of arts, science, technology and culture. 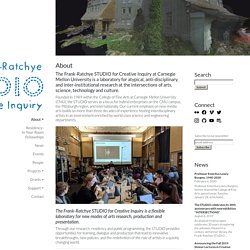 Founded in 1989 within the College of Fine Arts at Carnegie Mellon University (CMU), the STUDIO serves as a locus for hybrid enterprises on the CMU campus, the Pittsburgh region, and internationally. Our current emphasis on new-media arts builds on more than three decades of experience hosting interdisciplinary artists in an environment enriched by world-class science and engineering departments. The Frank-Ratchye STUDIO for Creative Inquiry is a flexible laboratory for new modes of arts research, production and presentation. 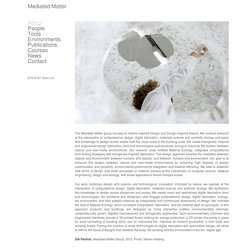 We conduct research at the intersection of computational design, digital fabrication, materials science and synthetic biology and apply that knowledge to design across scales from the micro scale to the building scale. We create biologically inspired and engineered design fabrication tools and technologies and structures aiming to enhance the relation between natural and man-made environments. Our research area, entitled Material Ecology, integrates computational form-finding strategies with biologically inspired fabrication. Ars Electronica.