*****Awesome maps of #refugee movements #geographyteacher The Movements Of Every Refugee On Earth Since The Year 2000. *****30 May 1948. The British Citizenship Act awarded the status of British subject to all Commonwealth citizens > migration from Commonwealth e.g. Caribbean, India, Pakistan. *****World map of Y-DNA Haplogroups with possible migration routes #Ethnicmaps #Humanity. *****Share of population in #Italy with blond hair. *****US Migration: Instant flow lines. England's immigrants (1330 - 1550) World 2000 BC. 125,000 years of human migration in one minute. New England ancestry by county (2000) *****Map of the locations of potentially uncontacted peoples at the start of the 21st century. The population of every US county, 1790 to 2010. 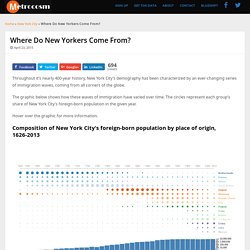 The graphic below shows how these waves of immigration have varied over time. The circles represent each group’s share of New York City’s foreign-born population in the given year. Australia was colonised by one group 50,000 years ago, DNA evidence reveals. Historic hair samples collected from Aboriginal people show that following an initial migration 50,000 years ago, populations spread rapidly around the east and west coasts of Australia. 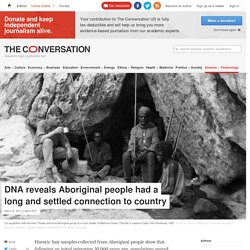 Our research, published in Nature today, also shows that once settled, Aboriginal groups remained in their discrete geographical regions right up until the arrival of Europeans a few hundred years ago. So where does the evidence for this rapid migration and long settlement come from? Early expeditions In a series of remarkable expeditions that ran from the 1920s to 1960s, scientists travelled widely across the Australian outback. *****Map on early #aboriginal #history in #Australia! Easy to see how continent was originally settled. How America's source of immigrants has changed over a century. *****Quantifying Global International Migration Flows - Paper & Visualisation #geography. Maps to avert catastrophe? Where a million UK citizens live in Europe. And where EU citizens in the UK come from. #OTD 1987: On the eve of the Irish election, BBC News looked at 'the scattering' - the emigration of Ireland's youth.

770 thousands genomes reveals post-colonial population structure of North America #Ethnicmaps #NorthAmerica #USA. This animated video shows 125,000 years of human migration. DNA tests on almost 1,000 people have shown all non-Africans are related to a single population that migrated from Africa between 80,000 and 50,000 years ago. 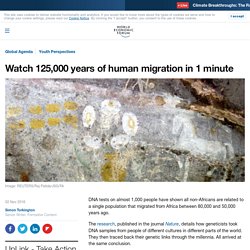 The research, published in the journal Nature, details how geneticists took DNA samples from people of different cultures in different parts of the world. They then traced back their genetic links through the millennia. #London's long history as a home to migrants often not appreciated; Llewellyn-Smith's data from 1881 census is fascinating #VictorianLondon. *****GIS interactive: Global Migration. Changing your view of migration, in just 30 seconds Read more. Best of Davos: Beyond the headlines: quantifying the economic contributions of migrants @WesternUnionCEO #wef17.

#EU countries with most citizens living abroad #UK 4.9M #Poland 4.4M #Germany 4.0M #Romania 3.4M HT @galka_max. Pretty #dataviz #map by @galka_max shows #migration flows across the globe. Chart shows birthplace of parents for population by age in #Australia. We are a very multicultural people. @simongerman600 Compare net flows over the past 5 years. China and India 2 of the biggest net losers. But yes, they have very big inflows. The 10 Ages of Migration - Rob. *****Over 20% of people from these countries have moved abroad. Read more.

Migration in #Europe: the story of the East. Green corridors led humans out of Africa. Climate and vegetation changes over the past 120,000 years affected human dispersal out of Africa. 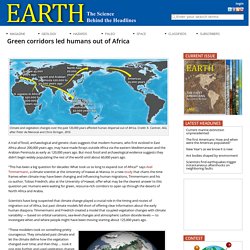 Credit: K. Cantner, AGI, after Peter de Menocal and Chris Stringer, 2016 A trail of fossil, archaeological and genetic clues suggests that modern humans, who first evolved in East Africa about 200,000 years ago, may have made forays outside Africa via the eastern Mediterranean and the Arabian Peninsula as early as 120,000 years ago. But most fossil and archaeological evidence suggests they didn’t begin widely populating the rest of the world until about 60,000 years ago.

How America's source of immigrants has changed over a century. ***World Interacitve Map of Migration 2010. ***Animated video shows 125,000 years of human migration. *Explore 50 years of international migration to and from the UK. Long-term international migration was a key factor in the EU referendum debate and as the details of how we will leave the EU emerge over the coming years it is likely to remain so. 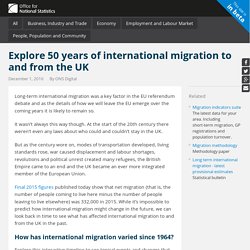 It wasn’t always this way though. At the start of the 20th century there weren’t even any laws about who could and couldn’t stay in the UK. #Map shows the 10 countries with the largest total number of #migrants. Neither #China nor #India make the cut!? Nearly 1 in 100 people worldwide have been displaced from their homes by war and persecution. There are more than 65 million people displaced from their homes, a record high since World War II. 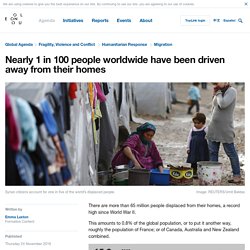 This amounts to 0.8% of the global population, or to put it another way, roughly the population of France; or of Canada, Australia and New Zealand combined. Image: UNHCR The UNHCR, the UN’s refugee agency, has been collecting data on displaced people since 1951, and in recent years it has seen numbers increase drastically. The interactive map of foreign born residents of the Netherlands. First and second generation immigrants by country. About half the population in #NZ and #Australia born abroad or have a parent who was. How Bangladesh's population fits into United States. DNA: Where are you from? With 244 million immigrants in the world, which country has the most? With nearly 30% of the population born outside of its borders, Switzerland is one of the European countries with the highest proportion of foreigners. 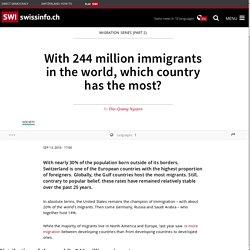 Globally, the Gulf countries host the most migrants. Still, contrary to popular belief, these rates have remained relatively stable over the past 25 years. Do you have #refugenes? 12 celebrities you never knew were refugees. What do the singers Jamie Cullum and Rita Ora, the authors Ben Elton and Neil Gaiman, the comedian Shappi Khorsandi and the architect Richard Rogers have in common? 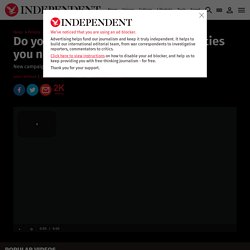 All of them have “refugenes”, according to a new campaign launched by the charity Help Refugees, which is seeking to raise awareness of the number of people in Britain who have a family history involving flight from conflict. Some, like The Voice star Ora, are themselves refugees. Global Migration. Here is everyone who's emigrated to the U.S. since 1820. Two Centuries of US Immigration Visualized. All the World's Immigration Visualized in 1 Map. This map shows the estimated net immigration (inflows minus outflows) by origin and destination country between 2010 and 2015. 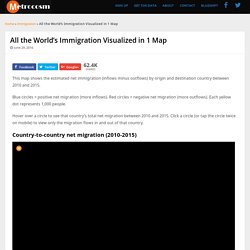 Blue circles = positive net migration (more inflows). Red circles = negative net migration (more outflows). Each yellow dot represents 1,000 people. Hover over a circle to see that country’s total net migration between 2010 and 2015. Click a circle (or tap the circle twice on mobile) to view only the migration flows in and out of that country. The 44 countries in which less than 1% of population was born abroad. Countries where less than 1% of the population was born overseas Map by @simongerman600 - This is how immigration will change Europe over the rest of this century. Migrants near the city of Gevgelija in the Former Yugoslav Republic of Macedonia line up to board a train bound for the Serbian border on Nov. 12, 2015. 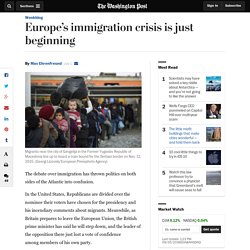 (Georgi Licovski/European Pressphoto Agency) The debate over immigration has thrown politics on both sides of the Atlantic into confusion. In the United States, Republicans are divided over the nominee their voters have chosen for the presidency and his incendiary comments about migrants. Meanwhile, as Britain prepares to leave the European Union, the British prime minister has said he will step down, and the leader of the opposition there just lost a vote of confidence among members of his own party. #Map shows most common foreign nationality in districts in #Germany. #Turkey in West; #Vietnam & #Poland in East. Via @BrilliantMaps. List of positive #asylum applications per 1000 residents in #Europe shows who is pulling their weight. #Sweden and #Germany on top. HT @OECD.

The flow towards Europe - Lucify. 20TH & 21ST Century Migrations / Our Migration Story. 1900–1960s The first half of the 20th century was one of low immigration except for crises created by the two world wars. World War I.