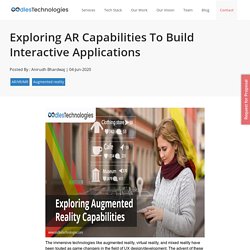 The advent of these technologies has made it possible to bridge the gap between the real and virtual worlds. While augmented reality brings digital elements into the real-world, virtual reality takes users into a virtual world. Both these technologies are rapidly gaining traction in the retail and e-commerce industries. Be that as it may, augmented reality has become more popular because of its easy accessibility and minimal hardware/software requirements.

As a result, the latter has witnessed a widespread adoption in various industries across different platforms. Statistica had predicted that the global consumer market for immersive technologies would bring in $6.3 in revenue by the end of 2020. At Oodles Technologies, we are receiving many requests from clients for building augmented reality apps even during the pandemic. How Startups Can Benefit From AWS IoT Core. The internet of things is becoming increasingly popular as the market of connected devices has grown tremendously over the recent years. 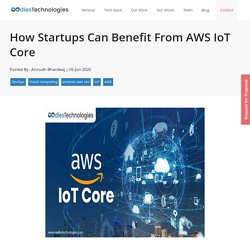 As of today, we have billions of connected devices exchanging data every minute to enhance user experiences with improved communications. According to Gartner, the IoT-based applications in enterprises and automotive market will grow to 5.8 billion endpoints by the end of 2020. The rapid expansion of the Internet of Things is inflicted by the advent of a wide range of connected devices like wearables, smart speakers, smart locks, and other types of smart home and office automation equipment. Understandably, the demand for IoT application development is at the all-time-high these days. At Oodles Technologies, we have been receiving requests for developing different types of IoT applications. Based on our experience in AWS IoT Core development services, we highlight the key areas where our clients benefit from this platform. Building Mixed Reality and IoT Solutions Using Azure. 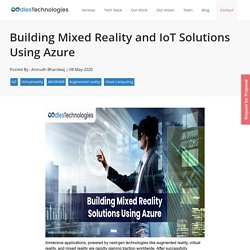 After successfully transforming various industries like gaming, entertainment, and advertising, these technologies are set to enter the mainstream market. Several retail brands and e-commerce companies are already using AR VR techniques to enhance their customer experiences. An increasing number of hotel and restaurant chains are training their staff using real-life simulations powered by virtual reality. Owing to the increasing popularity of these immersive technologies, several small-to-medium companies are investing in AR app development services. At Oodles, we receive several requests for building different types of AR, VR, and MR applications. The Impact and Need of Testing IoT Apps Across Industries. Many research institutes state that IoT application development will have a $6.2 trillion impact on the global economy by 2025. 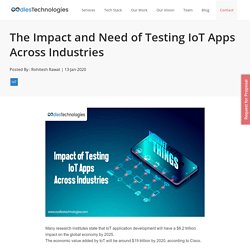 The economic value added by IoT will be around $19 trillion by 2020, according to Cisco. Technology has a great scope and potential for IoT app development services. IoT applications are revolutionizing the way businesses run, irrespective of the industry with the inclusion of wi-fi availability all over a surge in smartphone usage, digitalization across the global expansion of connectivity with cheaper connections and smart devices, with reduced costs, resulting in a better economy. Building Cross Platform Apps with Dart and Flutter. The proliferation of mobile apps has increased the demand for frameworks that support the smooth functioning of an app. 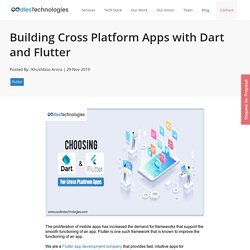 Flutter is one such framework that is known to improve the functioning of an app. We are a Flutter app development company that provides fast, intuitive apps for businesses across the globe. Our services include: Flutter mobile app development Flutter App UI UX DESIGN Quality Assurance and testing Flutter App Integration Developing an app with the Flutter framework provides unlimited benefits to the developers. Smart Home App Development Services. How IoT is Transforming Homes into Smart Homes. A smart home is a term which is used for a home that uses web-associated gadgets to run through remote sensing devices. 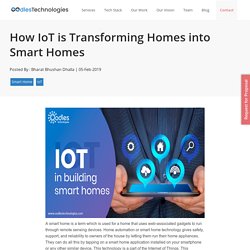 Home automation or smart home technology gives safety, support, and reliability to owners of the house by letting them run their home appliances. They can do all this by tapping on a smart home application installed on your smartphone or any other similar device. Understanding the Role of Augmented Reality in Architecture. According to the McKinsey Global Institute Industry Digitization Index, the construction industry spends $10 trillion on construction-related goods and services every year, making it the world’s economy's largest sector. 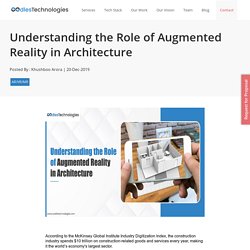 The sector needs a high level of digitalization to accelerate the construction process in different parts of the world. According to the U.S Bureau of Labor Statics, and Economic Analysis, the productivity in the construction work from the past 20 years has increased by just 1%. The Significance of Wearable Apps In The Fight Against COVID 19. The wearable technology has grown profoundly over recent years, successfully emerging as an evolving product category. 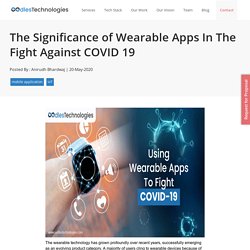 A majority of users cling to wearable devices because of their cutting-edge health-tracking features, not to mention the availability of fitness tracking apps. Having said that, wearable devices and applications can play a significant role in curbing the spread of the novel coronavirus, COVID-19. It’s been several weeks since the COVID-19 outbreak was declared as a global pandemic and it continues to spread across the globe.

With preventive measures in place like social distancing, mass quarantines, and nationwide lockdowns, we have been able to reduce the rate of contagion. However, containing the spread still seems difficult in the absence of a suitable vaccine. 5 IoT Advancements To Expect In 2020. The Internet of Things (IoT) network is rapidly expanding with billions of connected devices that collect and share data everyday. 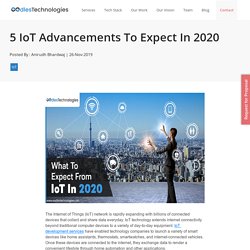 IoT technology extends internet connectivity beyond traditional computer devices to a variety of day-to-day equipment. IoT development services have enabled technology companies to launch a variety of smart devices like home assistants, thermostats, smartwatches, and internet-connected vehicles. Once these devices are connected to the internet, they exchange data to render a convenient lifestyle through home automation and other applications. Over recent years, there have been tremendous developments and advancements in IoT devices, enhancing their features and capabilities. As we approach the year 2020, research firms like Forrester, Gartner, and IDC are conducting mass surveys to identify the upcoming trends in IoT. Making Cities Smarter with the Internet of Things. The IoT technology (Internet of Things) is the key driver for the car, home, and office automation. 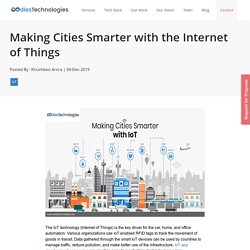 Various organizations use IoT enabled RFID tags to track the movement of goods in transit. Data gathered through the smart IoT devices can be used by countries to manage traffic, reduce pollution, and make better use of the infrastructure. IoT app development companies are creating apps for controlling digital devices using smartphones, wearables, and other smart devices. According to IT Pro in 2018 near to 3.6 billion internet-connected were used for daily tasks.

According to Market analysts, the number of connected devices will double from 2017 to 2020. Some of the popular IoT applications include smart home app development services , wearables, smart cities, smart grids, industrial internet, connected cars, connected health, smart retail, smart supply chain, and smart farming. Simplifying Mobile App Development Using Flutter. The demand for cross-platform mobile app development has grown significantly over recent years. All businesses or enterprises, whether local or international, want to expand their customer base and engage their audience through mobile apps. Mobile application development is an effective way to maximize user engagement and increase customer loyalty. As a result, an increasing number of businesses worldwide have invested in Android and iOS mobile app development. That being said, developing applications separately for Android, iOS, and other mobile platforms using different tools is both expensive and time consuming. The rapidly changing market trends and dynamically changing business requirements have paved the way for cross-platform mobile app development.

Flutter is a Google-owned mobile framework that is relatively new to the market and offers several benefits over the other similar frameworks. IoT Home Automation and Use Cases. The Internet of Things has opened new opportunities to reduce mechanical and operational failures. IoT solutions enable automation, remote operation, and monitoring of devices and machines. Smart IoT devices are now available for use in offices, homes, and public spaces for entertainment, security, and automation. McKinsey Global Institute predicts that the Internet of Things market will reach the U.S. $11.1 trillion annually by 2025. Enabling Accelerated Learning with Augmented Reality.

Augmented reality (AR) is a technology that has applications in the education sector to simplify and accelerate learning about complex concepts. The technology adds a virtual layer in real-time within real world settings so learners can better relate to study topics. At Oodles Technologies, we receive similar AR Application Development Company inquiries from clients who want us to create interactive 3D 4D models for their learning solutions. Our AR/VR app developers use technologies like SparkAR to cater to their requirements.

Let's explore how Augmented Reality is impacting the education sector:- Building Mixed Reality and IoT Solutions Using Azure. Benefits of Developing AR VR Apps with Amazon Sumerian. Our exposure to augmented reality (AR) and virtual reality (VR) applications has increased significantly in recent years. Organizations across industries see the potential of AR and VR apps for a range of uses including training and education. They are integrating AR VR technologies to their web or mobile apps to generate curiosity in consumers for their products or services. AR, VR, and MR technologies provide a more immersive medium to engage with customers. Enterprise Benefits of Implementing Cloud Based IoT Solutions. The number of devices connected to the internet has increased tremendously over recent years.

According to Comarch, the total number of connected devices is estimated to be a few times greater than the global population. This enormous growth is a direct consequence of the increasing popularity of the internet of things (IoT). A large number of businesses in all major industries like retail, finance, e-commerce, and agriculture are actively using a variety of IoT applications to streamline their communications. Not to mention, the telecommunication industry is amongst the top partakers of the cloud-based IoT technology. According to Telecom Review, IoT is expected to generate $1.8 trillion in revenue for mobile network operators alone by 2026. Benefits of Integrating AR with Wearable Technology. Things To Consider For Augmented Reality App Development. Augmented reality has become a buzzword in the digital landscape with an increasing number of applications in several industries like gaming, education, and e-commerce.

Benefitting from AI, Blockchain, and IoT Technologies. The impact of AI, Blockchain, and IoT technologies is realized by every major section of the society. The little we have discussed the amalgamation of these three technologies and how it can impact the business industry. According to Gartner’s predictions, the total spending on IoT Endpoint Security solutions will rise from $240M in 2016 to $631M in 2021, accomplishing a CAGR of 21.38%. According to Tractica, a Market Research Firm - the global AI software market is expected to experience a revenue increase from 9.5 billion U.S. dollars in 2018 to 118.6 billion by 2025.

Mitigating Cyber Attacks With IoT Security. Businesses produce large amounts of data that require the utmost safety from hackers. Understanding The Benefits Of Industrial Internet Of Things. The advent of the Internet of things (IoT) is changing the way businesses work. Its impact is visible in asset tracking, product manufacturing, designing, and healthcare, etc. Top 10 Widgets For Flutter Application Development. Hello Everyone! New Features and Enhancements In Flutter 1.9 With Dart 2.5. Choosing The Right Virtual Assistant For Smart Home Automation. Creating A Smart Home Environment With IoT Devices. The latest advancements in the Internet of Things and wireless sensor technologies have contributed towards creating a fully operational smart home environment. Understanding Machine Learning Algorithms In Python.