Learn how to code. Visualizing Wifi. This is one of those things I’ve always wondered in the back of my mind. 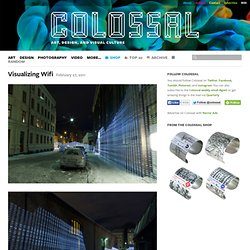 How far does a WiFi network actually reach and what would it look like? How come I have reception in one spot and not in another? Well a team from Oslo including Timo Arnall, Jørn Knutsen, and Einar Sneve Martinussen set out to answer just such a question by creating visual representations of actual Wifi networks to spectacular effect. Utilizing long-exposure photography and a four-metre long measuring rod with 80 LED light points they were able to “reveal” cross-sections in wireless networks. We built the WiFi measuring rod, a 4-metre tall probe containing 80 lights that respond to the Received Signal Strength (RSSI) of a particular WiFi network. See the full photo set and read much more about the project here.

Graphic design 1920s 1930s 1940s 1960s 1970s in paper ephemera. This brochure is another example of a series of brochures issued by the South Manchurian Railway as part of a beautiful series in the second half of the 1930s (previous). 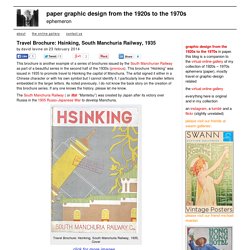 This brochure “Hsinking” was issued in 1935 to promote travel to Hsinking the capital of Manchuria. The artist signed it either in a Chinese character or with his own symbol but I cannot identify it. I particularly love the smaller letters embedded in the larger letters. As noted previously, I do not know the back story on the creation of this brochure series. If any one knows the history, please let me know. The South Manchuria Railway ( or 満鉄 “Mantetsu”) was created by Japan after its victory over Russia in the 1905 Russo-Japanese War to develop Manchuria. Travel Brochure: Hsinking, South Manchuria Railway, 1935, Cover click for more images… 29 Incredibly Useful Websites You Wish You Knew Earlier. Traveling. Travel. DHQ: Digital Humanities Quarterly: 2012. 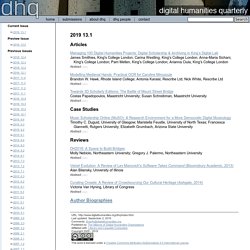 Popular songs are a good representation of modern culture and society. Songs by female singer-songwriters account for a large portion of the current Japanese hit charts and particularly play an important role in understanding the Japanese language and communication style. In this study, we applied new methods of computational stylistics to the lyrics of the songs. Managing an Established Digital Humanities Project: Principles and Practices from the Twentieth Year of the William Blake ArchiveAshley Reed, University of North Carolina In Praise of Overstating the Case: A review of Franco Moretti, Distant Reading (London: Verso, 2013)Shawna Ross, Arizona State University Author Biographies.

Storys. Cahokia. Interactive maps. 5 Unusual Ways to Start Working Smarter, Not Harder, Backed by Science. One of the things I love about the culture at Buffer is the emphasis on working smarter, not harder. 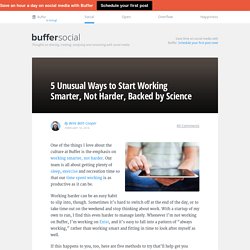 Our team is all about getting plenty of sleep, exercise and recreation time so that our time spent working is as productive as it can be. Working harder can be an easy habit to slip into, though. Sometimes it’s hard to switch off at the end of the day, or to take time out on the weekend and stop thinking about work. With a startup of my own to run, I find this even harder to manage lately. Whenever I’m not working on Buffer, I’m working on Exist, and it’s easy to fall into a pattern of “always working,” rather than working smart and fitting in time to look after myself as well. If this happens to you, too, here are five methods to try that’ll help get you working smarter, not harder. 1. In one of my favorite books, Stephen Covey tells a story about a woodcutter whose saw gets more blunt as time passes and he continues cutting down trees. 2.

So when should you be taking a nap? 3. 4. 5. Journaling. How To Start Keeping A Journal. At some point you have probably already read somewhere about the importance of keeping a trading journal. 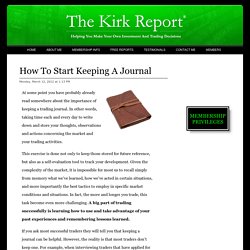 In other words, taking time each and every day to write down and store your thoughts, observations and actions concerning the market and your trading activities. This exercise is done not only to keep those stored for future reference, but also as a self-evaluation tool to track your development. Given the complexity of the market, it is impossible for most us to recall simply from memory what we’ve learned, how we’ve acted in certain situations, and more importantly the best tactics to employ in specific market conditions and situations. In fact, the more and longer you trade, this task become even more challenging. Keeping a Writer's Journal: 21 Ideas to Keep You Writing. Keeping a Writer's Journal: 21 Ideas to Keep You Writing by Sheila Bender Return to Creative Nonfiction · Print-Friendly Version Keeping a journal is one of the best tools to practice trusting your writing and to make sure you keep writing. 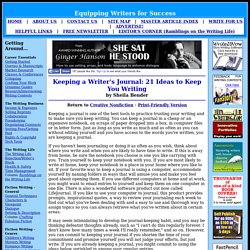 You can keep a journal in a cheap or an expensive notebook, on scraps of paper dropped into a box, in computer files or in letter form. Cross Curriculum. Vintage Images. Illustration. Maps.