BEI Template (Baseline) Covenant of Mayors - News. With the financial support of the European Commission Directorate General for Cooperation and Development, a new branch of the Covenant of Mayors Office (CoMO) opened a few months ago to support cities from Central Asia and the Eastern Partnership region in setting up sustainable energy policies. 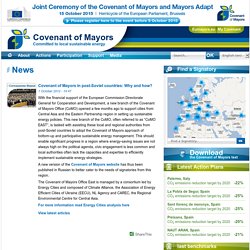 This new branch of the CoMO, often referred to as “CoMO EAST”, is tasked with assisting these local and regional authorities from post-Soviet countries to adopt the Covenant of Mayors approach of bottom-up and participative sustainable energy management. This should enable significant progress in a region where energy-saving issues are not always high on the political agenda, civic engagement is less common and local authorities often lack the capacities and expertise to efficiently implement sustainable energy strategies. International Cooperation and Development. Energy Union. Housing Europe. Cedec. European Chemical Industry Council. Covenant of Mayors - Sustainable Energy Action Plans. Covenant of Mayors. Council of European Municipalities and Regions. The Council of European Municipalities and Regions (CEMR) is the largest organisation of local and regional governments in Europe. 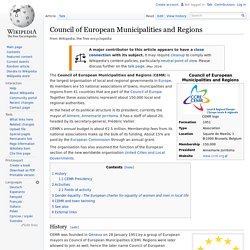 Its members are 55 national associations of towns, municipalities and regions from 41 countries that are part of the Council of Europe. Together these associations represent about 150,000 local and regional authorities. At the head of its political structure is its president, currently the mayor of Almere, Annemarie Jorritsma. It has a staff of about 20, headed by its secretary-general, Frédéric Vallier. CEMR’s annual budget is about €2.5 million. 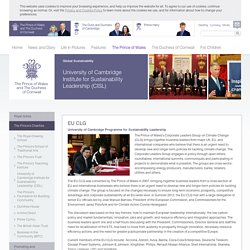 The Corporate Leaders Group engages in policy through open letters, roundtables, international summits, communiqués and participating in projects to demonstrate what is possible. The groups are cross-sector, encompassing energy producers, manufacturers, banks, retailers, utilities and others. Euesco.org. Home Volker Dragon Chairman Andrei Litiu Director Governmental Relations Every public as well as private organisation have one primary goal: bring the best services, products or solutions to market at competitive or at least affordable prices. 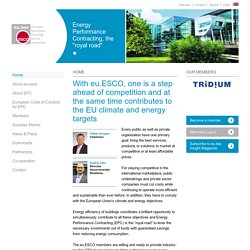 For staying competitive in the international marketplace, public undertakings and private sector companies must cut costs while continuing to operate more efficient and sustainable than ever before. Energy efficiency of buildings constitutes a brilliant opportunity to simultaneously contribute to all these objectives and Energy Performance Contracting (EPC) is the “royal road” to lever the necessary investments out of funds with guaranteed savings from reducing energy consumption. The eu.ESCO members are willing and ready to provide industry-leading EPC for leveraging building performance and energy efficiency by identifying energy conservation measures and implementing staged deep energy retrofits without utilizing capital funding. 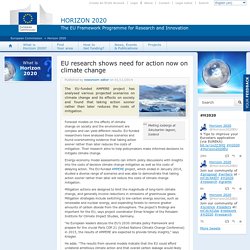 Mitigation actions are designed to limit the magnitude of long-term climate change, and generally involve reductions in emissions of greenhouse gases. The way to a low-carbon economy. What is Horizon 2020? Covenant of Mayors - News. The EU-funded STRATEGO project recently published the Pan-European Thermal Atlas (PETA), an interactive map that shows data on the thermal resources available in any region as well as EU-wide thermal demand. 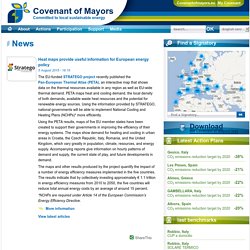 PETA maps heat and cooling demand, the local density of both demands, available waste heat resources and the potential for renewable energy sources. Using the information provided by STRATEGO, national governments will be able to implement National Cooling and Heating Plans (NCHPs)* more efficiently. Using the PETA results, maps of five EU member states have been created to support their governments in improving the efficiency of their energy systems. The maps show demand for heating and cooling in urban areas in Croatia, the Czech Republic, Italy, Romania, and the United Kingdom, which vary greatly in population, climate, resources, and energy supply.