#Map shows areas of #Berlin without residential population. The city is greener than you might think... By @hnshck Give him a follow :) *****Energy saving due to natural ventilation in housing blocks in Madrid (incl wind rose diagrams) Being in Zurich is a daily reminder that high quality public transit works. This street in Amsterdam = width of any street in Brooklyn. Look what's possible when you don't prioritize storage for cars. cc #bikenyc. *****Retrofit suburbs: For some developers, smart suburbs are the new smart cities. Forget smart cities — smart suburbs could possibly be the next great frontier of urban design with better planning and retrofitting. 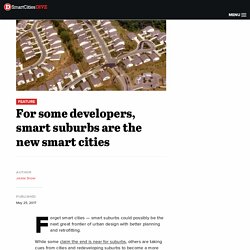 While some claim the end is near for suburbs, others are taking cues from cities and redeveloping suburbs to become a more appealing places for people to live. "Virtually every American city has the same story," said Robert Alan Ping, executive director of the Walkable and Livable Communities Institute. From New York City to St. Louis, cities started with a compact downtown that eventually was surrounded by sprawl and suburbs that many now want to see retrofitted to look and feel more like those downtowns. These retrofits cover everything from making a city more walkable, increased mixed-use planning, improving public transit, and sometimes creating an urban center that combines all three. 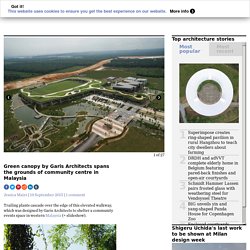 Named The Arc after its bridge-like form, the project was designed by local studio Garis Architects in a park in Selangor, a state on Malaysia's western coast. A covered corridor beneath the canopy links a football pitch, clubhouse and carpark, which are distributed within the park's watery landscaping. The sheltered area is also used to host community festivals, food stalls and shops. "At the most fundamental level, it provides shelter for community activities – the place for regular living amenity, social and recreational activities, communal and sports events," said the architects.

"Simultaneously, it needs to respond to the environment, particularly in addressing the sunlight, heat, humidity and rain of the tropical climate. " *****Sedum moss on a small roof: My own modest contribution towards @LondonNPC #NationalParkCity, a whole 5m2 of sedum #greenroof #SuDS @Sudsulike @theCCCuk. Car Sick – George Monbiot. A short, simple factsheet on the impacts of traffic pollution on children’s health By George Monbiot, published on monbiot.com, 5th March 2017 I wrote this short factsheet for a local school suffering high levels of air pollution, that are caused in part by the parents, sometimes driving their children just 100 metres up the road.

Part of the problem is that many people are unaware of the link between pollution and health issues. Clint Eastwood. What America looked like before the EPA stepped in - Houston Chronicle. By Fernando Ramirez, Chron.com / Houston Chronicle Updated 7:51 am, Tuesday, February 28, 2017 Original caption: A train on the Southern Pacific Railroad passes a five-acre pond, which was used as a dump site by area commercial firms, near Ogden, Utah, in April of 1974. 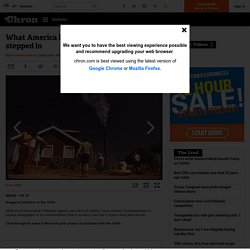 The acid water, oil, acid clay sludge, dead animals, junked cars and other dump debris were cleaned up by several governmental groups under the supervision of the EPA. Some 1,200,000 gallons of liquid were pumped from the site, neutralized and taken to a disposal site. Date: April, 1974. The boy with the backpack pollution monitor: Logan Eddy, aged 14, makes discoveries about air quality. A brilliant illustration of how much public space we've surrendered to cars. Solar-Powered Water Wheel Removes 350 Tons of Trash From Baltimore Harbor @MrTrashWheel. *****California city on its way to becoming the first Zero Net Energy city in the U.S. Safer Cities & Urban Development. Urban heat islands: cooling things down with trees, green roads and fewer cars. When it comes to coping with heatwaves, our own cities are conspiring against us. 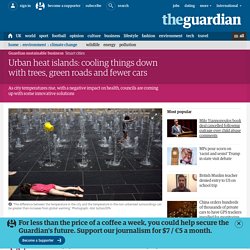 Road surfaces, pavements and buildings all contribute to keeping urbanised environments three to four degrees hotter than surrounding non-urbanised areas. With heatwaves like the ones that have just baked half of Australia to a crisp forecast to increase in frequency and intensity, city councils are taking the urban heat island effect very seriously.

“Some of the modelling studies have shown that we can often have an urban heat island magnitude – so that’s the difference between the temperature in the city versus the temperature in the non-urbanised surroundings – that can be greater than the types of temperature increases that we’re looking at with global warming,” says Dr Melissa Hart, graduate director of the ARC Centre of Excellence for Climate System Science at the University of New South Wales. One of the simplest solutions to reducing the urban heat island effect is to provide more shade, with trees. Junction design in the Netherlands. Junction design for bikes in the Netherlands #cycling #planning #safety #bike. A Startup Is First to Map Cape Town's Informal Bus Network. 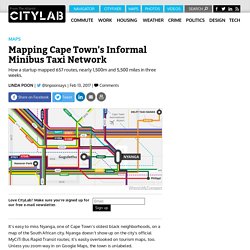 It’s easy to miss Nyanga, one of Cape Town’s oldest black neighborhoods, on a map of the South African city. Nyanga doesn’t show up on the city’s official MyCiTi Bus Rapid Transit routes; it’s easily overlooked on tourism maps, too. Lightbulb moment: UK streetlights get innovative green makeover. Streetlights connected to electricity networks in Kensington and Chelsea will now act as charge points for electric vehicles (EVs), while a Lanarkshire-based IT specialist has agreed to fund development of wind-harvesting lampposts in the UK. 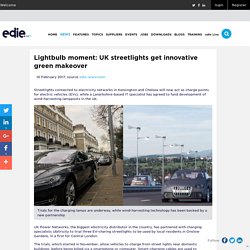 Trials for the charging lamps are underway, while wind-harvesting technology has been backed by a new partnership UK Power Networks, the biggest electricity distributor in the country, has partnered with charging specialists Ubitricity to trial three EV-charing streetlights to be used by local residents in Onslow Gardens, in a first for Central London. The trials, which started in November, allow vehicles to charge from street lights near domestic buildings, before being billed via a smartphone or computer. From London to Tokyo, 6 futuristic visions of our cities in 2121. Read more. ***** Pollution Gtr London maps. Woodberry Wetlands: London’s new wildlife oasis. Sir David Attenborough has opened a new nature reserve in London, a functioning reservoir, which has been hidden from the public for nearly 200 years As of 1 May, local residents of Woodberry Down – and, indeed, the entire general public – are able to freely visit and explore Woodberry Wetlands, London’s newest nature reserve. 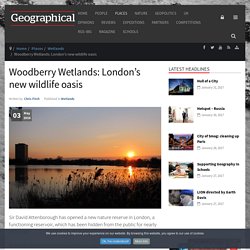 This 11-hectare reservoir in Hackney has been closed to the public since it was built in 1833, but thanks to an intervention by the London Wildlife Trust, it’s now making an assortment of wildlife accessible to Londoners. Smog Free Tower creates clean air, and air that you wear. Smog affects many major cities around the world and can cause health problems for those breathing it in. 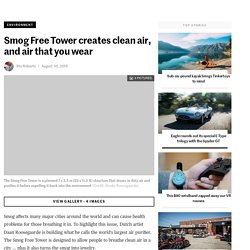 To highlight this issue, Dutch artist Daan Roosegaarde is building what he calls the world's largest air purifier. The Smog Free Tower is designed to allow people to breathe clean air in a city ... plus it also turns the smog into jewelry. The Smog Free Tower is the latest project of Roosegaarde's that deals with urban improvement. Previous projects have included glow-in-the-dark bike lanes and glow-in-the-dark road markings, along with smart highways that show different markings at different temperatures, that only use lighting when vehicles are detected, and that generate electricity. The aim of this latest project, Roosegaarde says, is to "make smog more tangible to people.

" The Smog Free Tower is basically a giant air ionizer. This smog-fighting music academy will have an air purifier as effective as 33,000 trees. The Polish city of Krakow has some of the worst air pollution in the world. 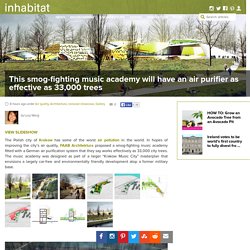 In hopes of improving the city’s air quality, FAAB Architektura proposed a smog-fighting music academy fitted with a German air purification system that they say works effectively as 33,000 city trees. The music academy was designed as part of a larger “Krakow Music City” masterplan that envisions a largely car-free and environmentally friendly development atop a former military base. Located between Krakow and the Vistula River, the proposed masterplan is designed to blend into the natural landscape with its vernacular wooden lap panel cladding and use of energy-efficient technologies. Around 1,300 square meters of a Green City Solutions-developed air purification product would be embedded in the music academy’s moss-covered rooftops. The special moss culture converts air pollutants into biomass.

Those behind City of Trees hopes the effort will not only green the region but improve our understanding of the benefits trees provide to society. These include reducing stress, improve air quality and the amount of time shoppers spend in retail areas. The project is also testing how trees can reduce flooding in built-up areas. City of Trees director Tony Hothersall explained that the scheme had three main objectives. World’s first Nordic Eco-labelled apartments completed in Copenhagen. The world’s first Nordic Eco-labelled project just wrapped up construction in one of Copenhagen’s most desirable areas.

Designed by Danish architects Vilhelm Lauritzen Architects and COBE, the award-winning Krøyers Plads development infuses a historic site in the center of the Copenhagen harbor with contemporary, eco-friendly construction. The five-story housing project meets stringent levels for sustainability and is nearly 40 percent more energy efficient than the legal requirements. Philippe Starck's New Wind and Solar-Powered Home Produces 50% More Energy Than it Consumes. Philippe Starck is spawning a new era of super green homes. The French designer teamed up with Riko, a European manufacturer of prefab wooden buildings, to build his latest wind and solar-powered home.

The glass and aluminum-clad prototype is part of the collection of residences called PATH (Prefabricated Accessible Technological Homes) and produces up to 50 percent more energy than it consumes. The two-story house is one of the four different types of homes designed to consume much less energy than traditional dwellings. Designing Regenerative Cultures. We can recycle everything we use, including cigarette butts and toothbrushes. So why don’t we? Within the broad range of sustainability concepts and activities, recycling is without doubt the most easily understood and accessible: individuals and groups, old and young, communities and institutions can participate.

Inside Glanrhyd, the first solar 'eco hamlet' in Wales. The Vertical Farm. A crash course in vertical farming and how it works. < Back to Urban Vine Co Blog Homepage. How green is your city? UK's top 10 mapped and ranked. Designing Regenerative Cultures. What a high-speed train looks like after traveling from Shanghai to Beijing through airpocalypse □□□ From coal city to European Green Capital - Essen′s extreme makeover. Stepping on to the platform at Essen's central station on a clear winter's morning, the first thing to catch my eye is a giant billboard proclaiming this "the shopping city. " ***Why houses in Bermuda have white stepped roofs. Image copyright Alamy. France to pave 1000km of roads with solar panels. Over the next five years, France will install some 621 miles (1,000km) of solar roadway using Colas' Wattway solar pavement. New recycled plastic sidewalk harvests energy from footsteps and the sun.

World's first solar panel road opens in Normandy village. Utopia: Six visions of our cities in the future, from Tokyo to Accra. New design guide will help solar panels shine. Global Development Professionals Network. David Harvey: Cities are Rotting Because of Capitalism. ***Low Impact Housing for Cities (e.g. BedZED) Czech buildings to be given financial support to implement green roofs. Bringing butterflies on green roofs right to the heart of Scotland. Green Roofs for Healthy Cities. *Green Roofs Take Root Around the World. The Evolution of Urban Planning in 10 Diagrams. Does anyone know of any play area signs that list the benefits of different kinds of play? #play #lotc #playoutdoors @outdoorpeeps.