Tips to Cope with a Panic Attack. A panic attack is a sudden rush of physical symptoms — like shortness of breath, muscle spasms, and nausea — coupled with uncontrollable anxiety and sometimes a sense of impending doom. 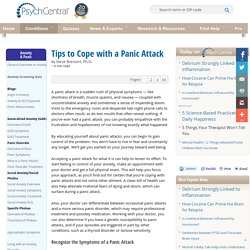 Visits to the emergency room and desperate late night phone calls to doctors often result, as do test results that often reveal nothing. If you’ve ever had a panic attack, you can probably empathize with the frustration and hopelessness of not knowing exactly what happened. By educating yourself about panic attacks, you can begin to gain control of the problem. Lloyd Armstrong sur Twitter : "Tips to Cope with a Panic Attack #MentalHealth #PanicAttack #AdaptiveCoping #Anxiety.

14 Amazing Apps For Anyone Living With Anxiety. Tina Pierik sur Twitter : "#IndigenousEyes #sd63 #youthmentalhealth... A Teacher Read His Class A Suicide Note From Far Away. One Of His Students Heard More Than Others. Chow Yiu-Fai: This is a death notice I read from a Dutch newspaper recently. 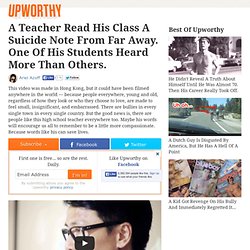 This is a 20-year-old boy from the Netherlands. After his suicide, his parents included his suicide note in the death notice: "Dear mum and dad, all my life I have been ridiculed, abused, bullied, and that's why I chose to leave. I hope you won't be angry with me," Tim Ribberink, 1992-2012.

Going through the news reports on his suicide, I was shocked that his parents had been completely ignorant of the pain their son had been going through. When I was young, or even now, I have never been very "macho". This young man was 20-years-old, about the same age as all of you are. Why are you crying? I hope that our school can be an environment in which you can retain your youthfulness and innocence, to learn and to grow up without fear.

I Am Me. Can Free Play Prevent Depression and Anxiety In Kids? Over the past 50-60 years, play time in kids’ lives has been drastically cut. 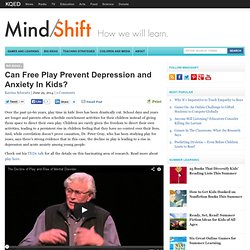 School days and years are longer and parents often schedule enrichment activities for their children instead of giving them space to direct their own play. Children are rarely given the freedom to direct their own activities, leading to a persistent rise in children feeling that they have no control over their lives. And, while correlation doesn’t prove causation, Dr. Peter Gray, who has been studying play for years, says there’s strong evidence that in this case, the decline in play is leading to a rise in depression and acute anxiety among young people. Check out his TEDx talk for all the details on this fascinating area of research. Related. Always #LikeAGirl. 11 first responders have killed themselves in the past ten weeks - Toronto. Watch above: 11 first responders have killed themselves in the past ten weeks. 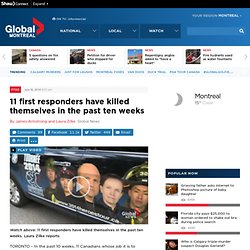 Laura Zilke reports TORONTO – In the past 10 weeks, 11 Canadians whose job it is to confront the most violent, traumatic situations have reportedly killed themselves. Seven of these first responders – four police officers, two paramedics and one federal corrections staff member – were in Ontario, according to the Tema Conter Memorial Trust, an organization that promotes mental-health awareness among Canada’s first responders. “It’s a national tragedy, if you ask me,” said Vince Savoia, a former paramedic and founder of the Tema Conter trust.

Light Up the World Purple 2014 for World Mental Health Day - with Amanda Todd Legacy Society - HOME. SaanichPDsloSgt : Local Heros Games was a #hoot ... Ways to Deal with a Crisis. TheMindBlowing: This deserves endless retweets:... Self-regulation technique helps students focus in class - Canada. At Cindrich elementary school in Surrey, B.C., 10-year-old boys are putting themselves to bed earlier, an enthusiastic girl in Grade 6 takes herself for a run when she’s feeling hyper, and a diminutive boy who is still learning English tells his teacher he will do better work if he sits on a special cushion. 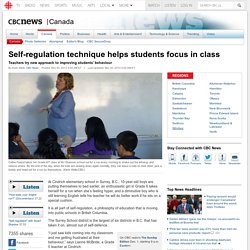 It is all part of self-regulation, a philosophy of education that is moving into public schools in British Columbia. The Surrey School district is the largest of six districts in B.C. that has taken it on, almost out of self-defence. On CBC radio's The Sunday Edition Dec. 1, starting 9 a.m. Eastern: Karima Bennoune on her book about ordinary Muslims who risk death to combat fundamentalism. “I just saw kids coming into my classroom and me getting frustrated at their behaviour,” says Lianne McBride, a Grade 5 teacher at Cindrich. Self-regulation ultimately hands the job of taking charge of their learning and their behaviour back to the kids. Remembering what calm means That idea isn’t new.

In One Voice. The pledge Beginning in January 2012, over 200 British Columbians added their voice to support mental health at mindcheck.ca. 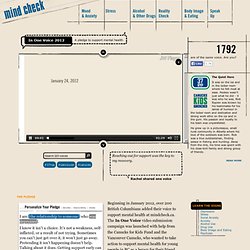 Anxiety Resources. AnxietyBC™ Pacific Centre Family Services Association. M.youthspace. The 10 Best and Worst Things You Can Say to Someone With Depression. Anxiety disorders: a mental illness on the rise - Technology & Science. Teaching to Diversity > Mental Health: Case studies. Disclaimer: The creators of this guide are not experts or professionals in mental health. 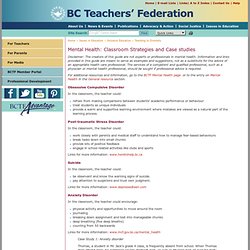 Information and links provided in this guide are meant to serve as examples and suggestions, not as a substitute for the advice of an appropriate health care professional. The services of a competent and qualified professional, such as a physician or mental health professional, should be sought if professional advice is required. For additional resources and information, go to the BCTF Mental Health page or to the entry on Mental Health in the General resource section. Obsessive Compulsive Disorder In the classroom, the teacher could: