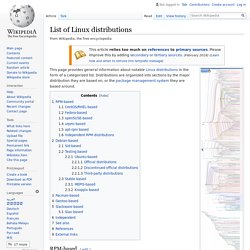 Distributions are organized into sections by the major distribution they are based on, or the package management system they are based around. Ubuntu. Linux distribution based on Debian Ubuntu is released every six months, with long-term support (LTS) releases every two years.[6][18][19] The latest release is 19.10 ("Eoan Ermine"), and the most recent long-term support release is 18.04 LTS ("Bionic Beaver"), which is supported until 2023 under public support and until 2028 as a paid option.[20][21] Ubuntu is named after the African philosophy of ubuntu, which Canonical translates as "humanity to others" or "I am what I am because of who we all are".[6] History[edit] Ubuntu is built on Debian's architecture and infrastructure, and comprises Linux server, desktop and discontinued phone and tablet operating system versions.[28] Ubuntu releases updated versions predictably every six months,[29] and each release receives free support for nine months (eighteen months prior to 13.04)[30] with security fixes, high-impact bug fixes and conservative, substantially beneficial low-risk bug fixes.[31] The first release was in October 2004. 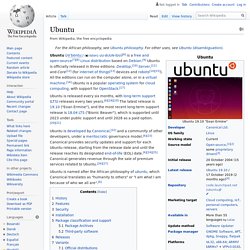 Goobuntu. Some have suggested that Google might plan to market the distribution more widely.[3][4][5] While both Google and Mark Shuttleworth, who spearheaded the development of Ubuntu, have confirmed that Goobuntu exists and is used internally,[6] both have strongly denied suggestions that Google has any plans to market the operating system.[7] See also[edit] References[edit] External links[edit] A screenshot of the login screen in Goobuntu, snapped at an officewarming party held for Google's newly inaugurated Tel Aviv offices (Yaron Orenstein). 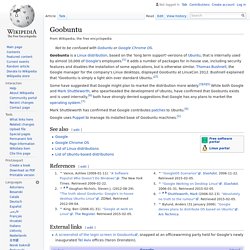 6 Ways to Defend Your Right to Repair With Linux and Free Software. As more tech products become impossible to repair ourselves, more people are demanding a change. 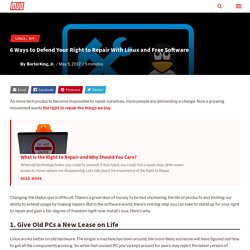 Now a growing movement wants the right to repair the things we buy. Changing the status quo is difficult. Switching to linux? 4 OS that feel like home. Switching to Linux opens the door to new tools and techniques to make your computing experience easier. 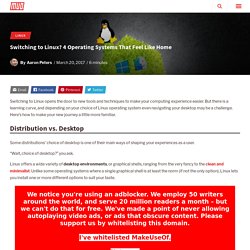 But there is a learning curve, and depending on your choice of Linux operating system even navigating your desktop may be a challenge. Here’s how to make your new journey a little more familiar. Some distributions’ choice of desktop is one of their main ways of shaping your experiences as a user. “Wait, choice of desktop?” You ask. Linux offers a wide variety of desktop environments, or graphical shells, ranging from the very fancy to the clean and minimalist. Ubuntu user. Full circle magazine. Linux Journal. 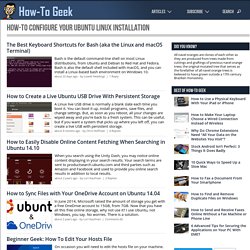 Bash is also the default shell included with macOS, and you can install a Linux-based bash environment on Windows 10. A Linux live USB drive is normally a blank slate each time you boot it. You can boot it up, install programs, save files, and change settings. But, as soon as you reboot, all your changes are wiped away and you’re back to a fresh system. This can be useful, but if you want a system that picks up where you left off, you can create a live USB with persistent storage. When you search using the Unity Dash, you may notice online content displaying in your search results. In June 2014, Microsoft raised the amount of storage you get with a free OneDrive account to 15GB, from 7GB. On occasion you will need to edit the hosts file on your machine. You’ve set up the programs you need. The Unity Launcher in Ubuntu is locked to the left side of the screen. Ubuntu geek. Ubuntu-fr - accueil. Ubuntu-fr - doc. 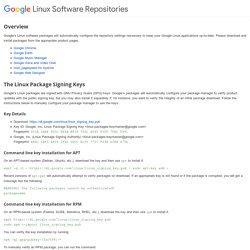 Please download and install packages from the appropriate product pages. The Linux Package Signing Keys Google’s Linux packages are signed with GNU Privacy Guard (GPG) keys. Google’s packages will automatically configure your package manager to verify product updates with the public signing key, but you may also install it separately if, for instance, you want to verify the integrity of an initial package download. Key Details Download: Key ID: Google, Inc. Command line key installation for APT On an APT-based system (Debian, Ubuntu, etc.), download the key and then use apt to install it. How-to geek - linux. The vim text editor, a standard tool included on Linux and macOS, can quickly encrypt text files with a password. 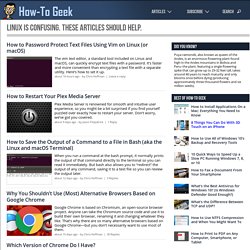 It’s faster and more convenient than encrypting a text file with a separate utility. Here’s how to set it up. Plex Media Server is renowned for smooth and intuitive user experience, so you might be a bit surprised if you find yourself puzzled over exactly how to restart your server. Don’t worry, we’ve got you covered. When you run a command at the bash prompt, it normally prints the output of that command directly to the terminal so you can read it immediately. Google Chrome is based on Chromium, an open-source browser project. Chrome is Chrome, right?

It’s ideal to have a dedicated machine for your BitTorrent client, so you can seed 24/7. Symbolic links, also known as symlinks, are special files that point to files or directories in other locations on your system. Laptop manufacturers spend a lot of time tuning their device drivers for Windows battery life. Gnome.