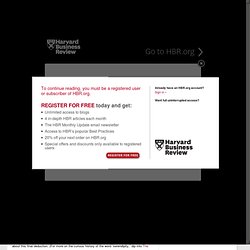 It is also one of the hardest to translate. Conversationally, it is used as tantamount to luck, providence or chance. It has brought us Aspirin, the Pill, insulin, Viagra, penicillin, antihistamines and the smallpox vaccine, Scotchgard, Teflon, Velcro, Nylon, Ivory Soap, the Post-It note, and the technology behind the HP Inkjet printer. Google outgoing CEO Eric Schmidt liked to think of his online search tool as a “serendipity engine.” All the above discoveries were serendipitous, yet much less lucky than popularly believed. Serendip Home. 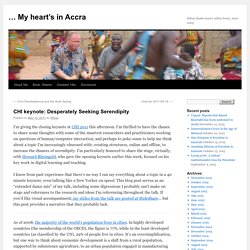 I’m thrilled to have the chance to share some thoughts with some of the smartest researchers and practitioners working on questions of human/computer interaction, and perhaps to poke some to help me think about a topic I’m increasingly obsessed with: creating structures, online and offline, to increase the chances of serendipity. I’m particularly honored to share the stage, virtually, with Howard Rheingold, who gave the opening keynote earlier this week, focused on his key work in digital learning and teaching. The Subtle Art of Provoking Serendipity.

{*style:<i>You don’t reach Serendib by plotting a course for it. 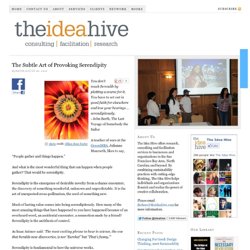 You have to set out in good faith for elsewhere and lose your bearings … serendipitously. </i>*}- John Barth, The Last Voyage of Somebody the Sailor A teacher of ours at the GreenMBA , Julianne Maurseth, likes to say, “People gather and things happen.” And what is the most wonderful thing that can happen when people gather? Serendipity is at the heart of today?s emerging society.

Serendipity is for me a deeply meaningful word. 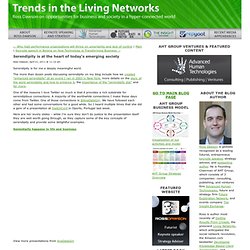 The more than dozen posts discussing serendipity on my blog include how we created “enhanced serendipity” at an event I ran in 2003 in New York, more details on the story of the word serendipity and how to enhance it, the importance of the “serendipity dial” and far more. One of the reasons I love Twitter so much is that it provides a rich substrate for serendipitous connections.

A majority of the worthwhile connections I make these days come from Twitter. One of those connections is @AnaDataGirl. We have followed each other and had some conversations for a good while. Here are her lovely slides – while I’m sure they don’t do justice to the presentation itself they are well worth going through, as they capture some of the key concepts of serendipity and provide some delightful examples. La sérendipité, et le droit à l’erreur comme nouveaux piliers générationnels des « nouveaux Bovary ». Mon papier dans la revue Influencia. Pour la dernière édition (super) intitulée « La jeunesse. 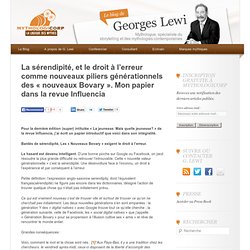 Mais quelle jeunesse? Eric Schmidt On The Future Of Search — A Move Towards A "Serendipity Engine" Today at our TechCrunch Disrupt conference in San Francisco, Google CEO Eric Schmidt took the stage to give a speech about his thoughts on the future. It was a very interesting talk which spanned a variety of topics. Naturally, the most important topic that Schmidt talked about was search. “We want to give you your time back,” Schmidt said. He noted that we live in an age of information overload, where we all have too much to do. The first step in getting your time back is Google Instant, the realtime search feature that Google recently launched, Schmidt said.

The next step in search is a move towards more personal results, according to Schmidt. Schmidt singled out personal context and personal email as two things a Google query could help with — though he was quick to note that Google would only do this if a user gives their permission. The common thread Schmidt kept pounding home was the importance of mobile in the future of computing. 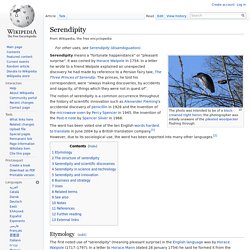 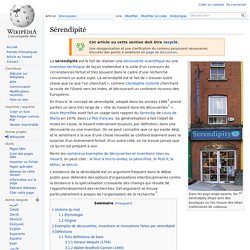 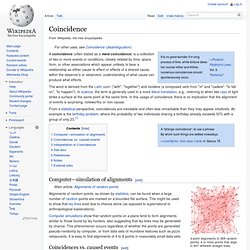 From a statistical perspective, coincidences are inevitable and often less remarkable than they may appear intuitively. An example is the birthday problem, where the probability of two individuals sharing a birthday already exceeds 50% with a group of only 23.[1] Computer—simulation of alignments[edit] Alignments of random points, as shown by statistics, can be found when a large number of random points are marked on a bounded flat surface.

This might be used to show that ley lines exist due to chance alone (as opposed to supernatural or anthropological explanations). Coincidences vs. caused events[edit] The Serendipity Machine - Home. Serendipity casts a very wide net. It is no accident that technology commentator Bill Thompson believes that the web does a lot to promote chance discovery One of those rumbling arguments that betrays a deeper discontent is going on within the loose collection of blogs, newspapers and academic websites that has replaced public lectures and university common rooms as the space for public debate on matters of intellectual significance. The question is whether the online information sources we use today limit our potential to find material by accident, and so reduce the chance of inadvertently discovering wonderful things or life-changing facts.

Accidental empire For some, like journalism teacher William McKeen, we are losing the space within which serendipity can guide us to those ideas that will change our world. Writing in the St Petersburg Times, which comes from Florida rather than Russia, he argues that modern technology reduces the space within which we can "make fortunate discoveries accidentally". Music man Clue train.

Journal of Serendipitous and Unexpected Results. Accidental Discoveries. By Lexi Krock Posted 02.27.01 NOVA From the chance discovery of quinine as a malaria treatment in the 17th century to Alexander Fleming's accidental encounter with penicillium mold in 1928, some of medicine's most important advances have occurred through serendipity. 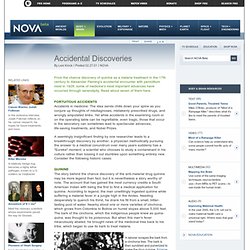 Serendipity. The Myth Of Serendipity. Editor’s note: Henry “Hank” Nothhaft, Jr. is the co-founder and CMO of Trapit, a virtual personal assistant for Web content still in private beta that was incubated out of SRI and the CALO project (as was Siri, the conversational search engine bought by Apple). 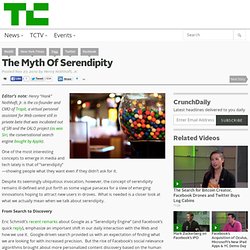 One of the most interesting concepts to emerge in media and tech lately is that of “serendipity”—showing people what they want even if they didn’t ask for it. Despite its seemingly ubiquitous invocation, however, the concept of serendipity remains ill-defined and put forth as some vague panacea for a slew of emerging innovations hoping to attract new users in droves. What is needed is a closer look at what we actually mean when we talk about serendipity.

From Search to Discovery Eric Schmidt’s recent remarks about Google as a “Serendipity Engine” (and Facebook’s quick reply), emphasize an important shift in our daily interaction with the Web and how we use it. Serendipity and personalization are in fact two sides to the same coin. Should good leaders embrace uncertainty? "Leaders are overrated. " That's how MIT Media Lab director Joichi Ito started off his presentation at IBM's THINK global leadership summit in New York City, drawing much laughter and perhaps the ire of a few quiet holders of masters of business administration degrees. Ito took to the stage solo to wonder, openly, about the value of the title "leader" in an age where many less hierarchical organizations have proven their worth through connected technology. "Open source is interesting because people decide what they want to do," he said, citing Mozilla, the non-profit organization behind the Firefox browser, and Wikipedia, the free collaborative online encyclopedia.

"With proper incentivation, it's more efficient than [managing by] the Newtonian leadership model. " "We believe enlightened self-interest is what makes the world go round. Digital serendipity: be careful what you don't wish for. Manoeuvrability, yes… magical mystery tours, no. Photograph: Alex Segre/Alamy. Serendipity Inadvertently sampling the nonobvious. "Oh, to be alive in such an age, when miracles are everywhere, and every inch of common air throbs a tremendous prophecy, of greater marvels yet to be.

" Walt Whitman And what marvels we have in front of our very own eyes! Marvels of technology and science we could not have foreseen but always desired, marvels of understanding and knowledge we could not fathom just a moment ago, and yet in a very real sense at least for some of us, rational beings in the age of hyper-connectivity, most of these are expected if not outright obvious, the problem of course is that obviousness and banality take huge chunks of our time and attention, diminishing as it were the possible amount of serendipity which is in a sense the reason we apply ourselves to the seeking of the new , of the curious, of the inexplicable and perchance the delightfully illuminating. Un-worshipping the obvious Albert Hofmann Serendipity means thus Inadvertently sampling the non obvious Surprise!

Today. The Science of Serendipity.

Wikipédia:Une page au hasard. Une page de Wikipédia, l'encyclopédie libre. Une page au hasard est une fonctionnalité de MediaWiki (le logiciel utilisé par Wikipédia) qui permet de tirer une page au hasard parmi toutes celles existantes. Accès[modifier | modifier le code] Role of chance in scientific discoveries. Scientists are not passive recipients of the unexpected; rather, they actively create the conditions for discovering the unexpected and have a robust mental toolkit that makes discovery possible. – Kevin Dunbar and Jonathan Fugelsang[1] The role of chance, or luck, in science comprises all ways in which unexpected discoveries are made. This is a topic studied in many domains, especially psychology. Kevin Dunbar and colleagues estimate that between 30% and 50% of all scientific discoveries are, in some sense, accidental (see examples below).[1] Research suggests that scientists are taught various heuristics and practices that allow their investigations to benefit from serendipity.[1][6] Researchers use the scientific method because the careful control conditions allow them to properly identify something as "unexpected", potentially leading them to new knowledge.

" 6 idées pour mettre en place votre "laboratoire à sérendipité" Outils Recherche Web Divers - Ressources Outils Froids. Searching Without Objectives. Bio Kenneth O. Stanley is an assistant professor in the Department of Electrical Engineering and Computer Science at the University of Central Florida. His Ph.D. is from the University of Texas at Austin. He is an inventor of the Neuroevolution of Augmenting Topologies (NEAT) and HyperNEAT algorithms for evolving complex artificial neural networks. The Serendipity Equations by Antonio Figueiredo, José Campos. Picbreeder.