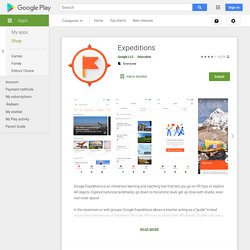 Explore historical landmarks, go down to the atomic level, get up close with sharks, even visit outer space! In the classroom or with groups, Google Expeditions allows a teacher acting as a “guide” to lead classroom-sized groups of “explorers” through VR tours or show them AR objects. Guides can use a set of tools to point out interesting things along the way. Users that are not in groups can also explore on their own either in VR or AR. Real Dragon Pet for Android. Hide messages in the real world.

Hashtag #ipadOS sur Twitter. Shapes 3D Geometry apps (@Shapes3D) Augmented Reality and 3D Geometry — bring some magic to your classroom. If you think that magic is something you only see in the Harry Potter series and you can’t create anything even similarly engaging in your classroom — think again! 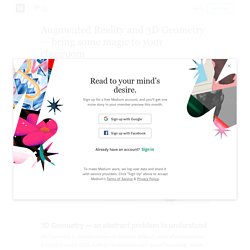 Augmented Reality has a magical power to make your lessons so exciting that students don’t want to stop exploring mathematics when the bell rings. 3D Geometry is considered one of the most difficult areas of mathematics. It requires many skills, such as visualization and spatial reasoning, which allows you to deal with three-dimensional shapes. Even students who are considered to be clever argue that they are not sure enough how to approach 3D geometry challenges. Why learning 3D objects is so hard when we live in a three-dimensional world? Kids learn their environment of 3D shapes by exploring it — everything around us is three-dimensional. In The Know Innovation - 3D laptop brings augmented reality learning to the classroom. ZooKazam4. 25 Best Augmented Reality Apps (Some games like Pokemon Go)

Augmented reality apps for kids and adults are a great way to connect your digital and real life. 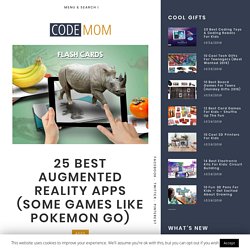 These apps vary from educational apps to games and even a digital advertising app created to make your outing more informational. For younger kids, augmented reality apps are more coloring based. Bringing their colored characters to life. As they grow older, the apps are more based on games like Pokemon Go, showing them monsters in the real world that they can interact with. There are also educational based apps for all ages, that allow users to see and learn more about the human body or the solar system, and an app that allows you to digitally trace sketches on paper. Disney is using augmented reality to bring coloring books to life.

A Disney Research team has developed technology that projects coloring book characters in 3D while you're still working on coloring them. 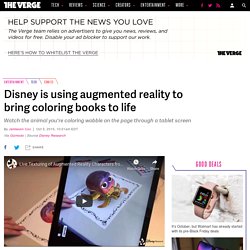 The process was detailed in a new paper called "Live Texturing of Augmented Reality Characters from Colored Drawings," and it was presented at the IEEE International Symposium on Mixed and Augmented Reality on September 29th. That title's a mouthful, but it's descriptive: the live texturing technology allows users to watch as their characters stand and wobble on the page and take on color as they're being colored in. You can see an example in the video above: the elephant's pants are turning blue on the tablet screen just as they're being filled on the page itself. Augmented Reality App Development Company. 7 Best Augmented Reality Solutions for Christmas Packaging. Christmas holidays are around the corner, and that means it’s a great time to create holiday advertising and gift packaging. 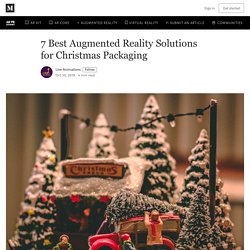 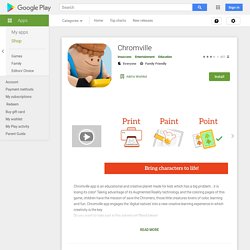 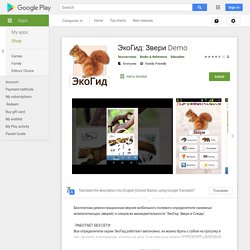 Tl;dr Just pressed REDO four times to complete the glyph “ALL” because the app would draw the line between two non-consecutive dots I was glyphing. 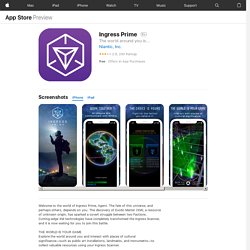 Just...forget Translator badge exists. On the other hand, Niantic is experimenting with Ingress monetization. ‎Quiver - 3D Coloring App on the App Store. Coloring pages have never been so much fun! 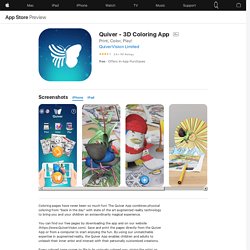 The Quiver App combines physical coloring from “back in the day” with state of the art augmented reality technology to bring you and your children an extraordinarily magical experience. You can find our free pages by downloading the app and on our website ( Save and print the pages directly from the Quiver App or from a computer to start enjoying the fun. By using our unmatchable expertise in augmented reality, the Quiver App enables children and adults to unleash their inner artist and interact with their personally customized creations. Every colored page comes to life in its uniquely colored way, giving the artist an immediate and special sense of ownership and pride! Not only is the app incredibly fun, but it is also a great tool for developing skills and knowledge on various topics. ‎Quiver Masks on the App Store.

QuiverVision has taken the augmented reality coloring experience that you know and love, and introduced new elements of fun and play in Quiver Masks. 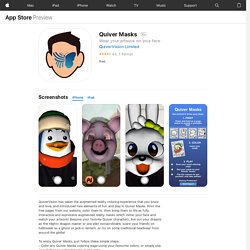 Print the free pages from our website, color them in, then bring them to life as fully interactive and expressive augmented reality masks which mimic your face and match your artwork! Become your favorite Quiver characters, live out your dreams as the mighty dragon master or ace pilot extraordinaire, scare your friends on halloween as a ghost or jack-o-lantern, or try on some traditional headwear from around the globe! To enjoy Quiver Masks, just follow these simple steps:- Color any Quiver Masks coloring page using your favourite colors, or simply use one of the pre-colored masks in the app! ‎Pukka Fun on the App Store. ‎Quiver Fashion on the App Store. ‎Cyberchase Shape Quest on the App Store. From PBS KIDS and Cyberchase comes Shape Quest, a captivating app combining games, puzzles and 3D augmented reality! ‎OOBEDU on the App Store. ‎World of Zoo by OOBEDU on the App Store. Each animal has a different world of their own and they exhibit a unique sound and behaviour.

Take a journey Into the WILD with OOBEDU “World of ZOO” and see the animals come to life in 3D by just scanning the picture in the flash card using Augmented Reality. Listen to their sounds, make them move, rotate and take pictures with the click of a button. The experience of seeing the real animals come to life, is bound to bring your little ones to the edge of their seats and a big smile to their faces. Optimised for devices with 1 GB of RAM or more • Scan box front cover for preview of the Augmented Reality feature.• Rotate the animals using two fingers• Make the animals perform various actions like Walk, Swim, Attack, Roar etc. using the buttons.• Listen to the spellings of the animals.• Click on the Info button to know more about that animal.• Take a picture with your favourite animal by using the screenshot button.• Enable selfie mode by switching to the front camera. ‎Know our Anatomy by OOBEDU on the App Store.

‎Star Walk - Explore the Sky on the App Store. Star Walk is the most beautiful stargazing app you’ve ever seen on a mobile device. It will become your interactive guide to the night sky, following your every movement in real-time and allowing you to explore over 200, 000 celestial bodies with extensive information. ***Over 10 million users! Winner of Apple Design Award 2010*** 3D Anatomy - Apps on Google Play. Free access to 3D anatomical models of skull, trunk and upper limb.In-app purchases to unlock all body regions (Full Version) "Skeleton | 3D Atlas of Anatomy" is a next generation anatomy atlas in 3D which gives you availability of interactive highly detailed anatomical models!

Each bone of the human skeleton has been reconstructed in 3D, you can rotate and zoom in on each model and observe it in detail from any angle.By selecting models or pins you will be shown the terms related to any specific anatomical part, you can select from 11 languages and show the terms in two languages simultaneously. "Skeleton" is a useful tool for students of medicine and physical education, for physicians, orthopedists, physiatrists, physiotherapists, kinesiologists, paramedics, nurses and athletic trainers. HIGHLY DETAILED ANATOMICAL 3D MODELS• Skeletal System• Accurate 3D modeling• Surfaces of the skeleton with high resolution textures up to 4K.

‎SketchAR: learn how to draw on the App Store. Learn how to draw using new SketchAR 5.0 technology - computer vision and augmented reality merged together to speed up the learning process and make it more entertaining. SketchAR is for those who have always wanted but have never been able to draw. Also, the app is designed for professional artists as a simp​le and convenient way to trace sketches onto any desired surface (e.g., canvas, wall, etc.). FOR CORRECT DETECTION, PLEASE FOLLOW THE TIPS!