The Business Block on Instagram: “Halford's have seen a 184% increase in sale... Tesco Homeplus Virtual Subway Store in South Korea. Introducing Amazon Go and the world’s most advanced shopping technology. Arla Foods to pay its 2018 profit to Europe's drought-hit farmers. The dairy company Arla Foods is planning to pay its entire 2018 profit to farmers who are struggling financially due to the drought that has affected Europe over the summer. 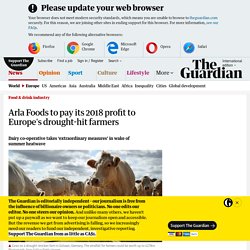 The firm – a co-operative owned by more than 11,200 farmers in the UK, Denmark, Sweden, Germany, Belgium, Luxembourg and the Netherlands – said it expected the windfall to be worth up to £278m. The Arla chairman, Jan Toft Nørgaard, said: “As a farmer-owned dairy company, we care deeply about the livelihood of our farmers and we recognise that this summer’s drought in Europe has been extraordinary. “We are proposing that extraordinary measures be taken in this situation and the board is satisfied with the positive development of the company’s balance sheet, which makes this proposal possible.” The Denmark-based co-operative, which can trace its roots back to one formed in Sweden in 1881, owns brands such as Lurpak and Anchor and has UK sites in Devon, Leeds and Aylesbury, Buckinghamshire.

3.7.6 What is corporate social responsibility? 3.7.6 Technological Change: Is the End Nigh for Baristas? 3.7.6 Profit vs principles. 3.7.6 - The Automotive Industry and Technology. 3.7.6 Amazon - Virtual aide Alexa shouts above rivals. Image copyright Getty Images Virtual assistants are everywhere at CES this year - but one speaks louder than the rest. 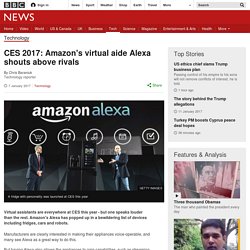 Amazon's Alexa has popped up in a bewildering list of devices including fridges, cars and robots. Manufacturers are clearly interested in making their appliances voice-operable, and many see Alexa as a great way to do this. But having Alexa also allows the appliances to gain capabilities, such as streaming music and turning smart lights on and off. How did Alexa come out on top and how will it benefit Amazon? The firm was quick to notice the potential of voice control following the rise of smartphone apps that could interact with appliances, answers tech analyst Dinesh Kithany at IHS Technology. "Alexa's rivals haven't been promoted quite as well," he told the BBC, though he noted companies adopting the assistant must think of genuinely useful ways to integrate it into their products. Image copyright Amazon Image copyright AFP Image copyright Nvidia Image copyright Microsoft. 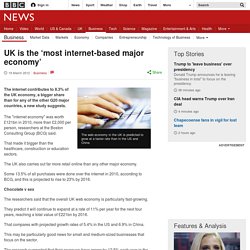 The "internet economy" was worth £121bn in 2010, more than £2,000 per person, researchers at the Boston Consulting Group (BCG) said. That made it bigger than the healthcare, construction or education sectors. The UK also carries out far more retail online than any other major economy. Some 13.5% of all purchases were done over the internet in 2010, according to BCG, and this is projected to rise to 23% by 2016. Chocolate v sex The researchers said that the overall UK web economy is particularly fast-growing. They predict it will continue to expand at a rate of 11% per year for the next four years, reaching a total value of £221bn by 2016. 3 7 6 Social Environment changes, benefits and consumption examples. 3.7.6 Structural slump in retail. 3.7.5 Trucker body to seek cartel compensation - CSR. 3.7.6 Carroll's Social Responsibility Pyramid.

3.7.6 - Technological Change in the Automotive Sector: Software Rules - Not Hardware. A fascinating short video here from the FT Business and Automotive team which considers how modern cars have become highly sophisticated pieces of technology - and how further technological change may transform the modern motor. 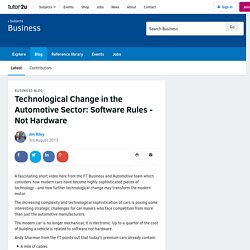 The increasing complexity and technological sophistication of cars is posing some interesting strategic challenges for car makers who face competition from more than just the automotive manufacturers. The modern car is no longer mechanical; it is electronic. Up to a quarter of the cost of building a vehicle is related to software not hardware. Andy Sharman from the FT points out that today's premium cars already contain: A mile of cables100 million lines of codeUp to 70 computer control unitsThe computing power of around 20 advanced PCs So where next for car manufacturers? 3.7.6 Do Socially-Responsible Businesses Perform Better?

3.7.6 Under pressure: campaigns that persuaded companies to change the world. Hard-hitting activist campaigns against big corporations have become part of the sustainability landscape. 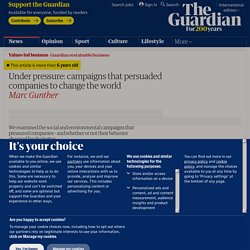 Some change the world. Some change little. Telling the difference between one and the other isn’t easy. Consider this example of a victory that is less than it seemed at the time: when the Breast Cancer Fund accused Revlon of using chemicals linked to cancer in its cosmetics, the company called the charges “false and defamatory”, demanded a retraction and threatened to sue. Instead, last month, Revlon for the first time published an ingredients policy. So what happened? “This was happening,” says Alexandra Gerber, vice president and assistant general counsel. Transparency matters – without it, buyers of shampoo and nail polish can’t make informed choices or avoid potential allergens.

Then there are game-changing battles, like the decade-long campaign waged by green groups against Indonesia-based Asia Pulp & Paper. 3.7.6 CSR & Ethics: Apple and the EU Battle Over Tax Avoidance. 3.7.6 - Carroll's CSR Pyramid - study notes. 3.7.6 Shampoo bottle made from ocean plastics hailed as ‘technological breakthrough’ Beaches strewn with plastic waste have become a graphic illustration of just how much plastic we use in everything from food packaging to cosmetics, and how much of it gets thrown away. 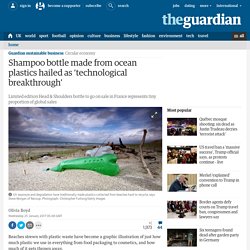 Consumer goods giant P&G has become the latest company to attempt to show it is tackling the problem, announcing plans for a limited run of Head & Shoulders shampoo in bottles made partly from plastic waste collected by volunteers on France’s beaches. It follows the likes of Adidas, which put 7,000 pairs of trainers made from marine plastics on sale in November, and Pharrell Williams, whose clothing line for G-Star RAW has featured denim containing plastic from the oceans. Ecover, which sells cleaning products, has produced several limited edition bottles, using marine plastics from the North Sea and waste collected from Amsterdam’s canals. P&G expects to manufacture up to 170,000 of their special edition bottle, produced in collaboration with recycling business TerraCycle and waste management firm Suez.