BlackBerry KeyOne review: part productivity, part nostalgia - The Verge. It was in about the third hour of using the new BlackBerry KeyOne, available for preorder now for $549 unlocked, that I started to question my longtime preference for touchscreen keyboards. 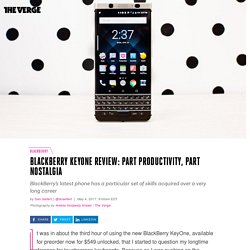 Because as I was pushing on the KeyOne’s tiny little buttons with the tips of my thumbs, I remembered why some people still have such an affinity for these things. It wasn’t that I was able to type faster with the BlackBerry’s keyboard (I wasn’t), or that I was more accurate with it (I still used autocorrect). It was that I felt like I was more productive when using it. I wasn’t wasting time tweeting nonsense or sending emoji in ephemeral messages. I was sending important emails, working with my colleagues in Slack, creating and completing to-do lists, and adding appointments to my calendar. Blackberry sues Nokia in patent clash. Image copyright Getty Images Blackberry is suing Nokia over claims that the Finnish company has made use of nearly a dozen of its inventions without permission. 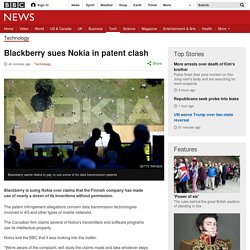 The patent infringement allegations concern data transmission technologies involved in 4G and other types of mobile networks. The Canadian firm claims several of Nokia's transmitters and software programs use its intellectual property. Nokia told the BBC that it was looking into the matter. "We're aware of the complaint, will study the claims made and take whatever steps are necessary to defend our rights," said a spokeswoman. BlackBerry opens self-driving and connected-vehicle R&D center. BlackBerry has opened an R&D center to speed up the creation of software for self-driving vehicles and connected communications technology that allows vehicles to talk to each other and to the roadway infrastructure around them. 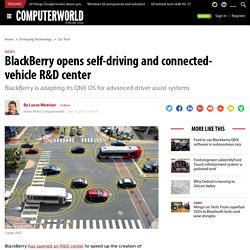 BlackBerry Signs Long-Term Smartphone Agreement With TCL. TCL, a somewhat prominent all-around Chinese manufacturer, caught the attention of US smartphone firm BlackBerry when they decided to make an exit from the hardware market. 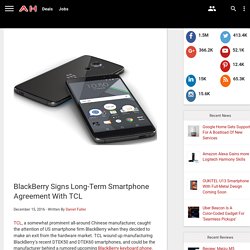 TCL wound up manufacturing BlackBerry’s recent DTEK50 and DTEK60 smartphones, and could be the manufacturer behind a rumored upcoming BlackBerry keyboard phone. BlackBerry died because of its appeal to nostalgia over innovation. Goodnight, sweet prince. 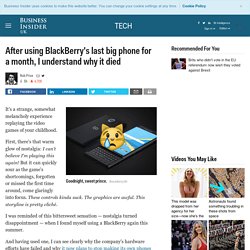 BlackBerry/BI It's a strange, somewhat melancholy experience replaying the video games of your childhood. First, there's that warm glow of nostalgia: I can't believe I'm playing this again! But it can quickly sour as the game's shortcomings, forgotten or missed the first time around, come glaringly into focus. These controls kinda suck.

I was reminded of this bittersweet sensation — nostalgia turned disappointment — when I found myself using a BlackBerry again this summer. And having used one, I can see clearly why the company's hardware efforts have failed and why it now plans to stop making its own phones altogether. BlackBerry bails on building its own phones - CNET. It's the nail in the coffin for phones from BlackBerry. 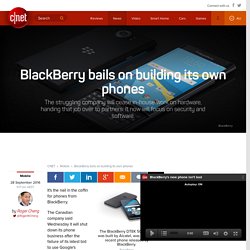 The Canadian company said Wednesday it will shut down its phone business after the failure of its latest bid to use Google's Android software to stimulate interest. Instead, the company will rely on others to design, build and sell the devices to save on capital. "The company plans to end all internal hardware development and will outsource that function to partners," CEO John Chen said in a statement. So far, BlackBerry has named just one such partner: Indonesia-based BB Merah Putih.

BlackBerry's decision closes a significant chapter in one of the most storied franchises in the phone industry, and comes at a time when it is shifting its focus on software and services. Blackberry stops designing its own phones. BlackBerry’s security-focused Android identity crisis. Consider BlackBerry. 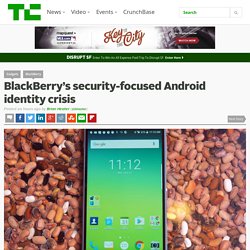 Think about the company, its products, its most iconic features. What comes to mind? Business apps? A QWERTY keyboard? BBM? Blackberry battles on with Dtek50 Android phone. Blackberry has launched its first touchscreen-only Android handset, in a bid to diversify its range of devices. 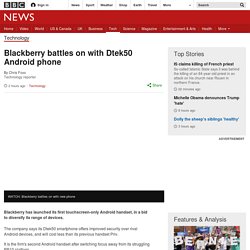 The company says its Dtek50 smartphone offers improved security over rival Android devices, and will cost less than its previous handset Priv. It is the firm's second Android handset after switching focus away from its struggling BB10 platform. One analyst said the phone was the "right move" but that the company still faced an "uphill battle" with devices. "The real challenge is whether Blackberry can convince enough corporate buyers to buy a batch of mid-range phones," said Nick McQuire, analyst at CCS Insight. BlackBerry goes into the red as revenue drops by a third.

It looks as though BlackBerry CEO John Chen will still be in charge long enough to launch another couple of phones -- although don't expect any new flagship models. 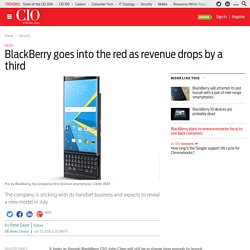 Chen was re-elected chairman of the board for another year on Wednesday. He still plans to launch two new mid-range phones in the next nine months, one of them as early as July. They'll be cheaper than the Priv, BlackBerry's first Android phone, but with the same level of security, he said Thursday. Shareholders might not have given him such strong support if they'd seen the numbers the company reported Thursday for the first quarter of its 2017 financial year. Revenue dropped to US$400 million in the three months to May 31, down 39 percent from $658 million a year earlier.