Seeding an Open Marketplace for IoT Edge Computing - EdgeX Foundry. Computer Vision and Machine Intelligence: Advancing the Human/Machine Partnership. As we head into VMworld, hot on the heels of a successful Dell Technologies World, it seems like an appropriate time to provide an IoT update. 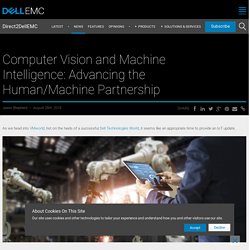 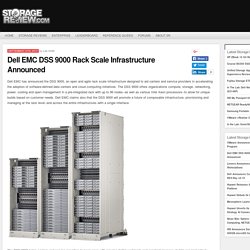 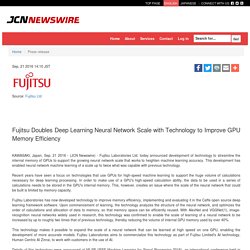 This development has enabled neural network machine learning of a scale up to twice what was capable with previous technology. Recent years have seen a focus on technologies that use GPUs for high-speed machine learning to support the huge volume of calculations necessary for deep learning processing. In order to make use of a GPU's high-speed calculation ability, the data to be used in a series of calculations needs to be stored in the GPU's internal memory. This, however, creates an issue where the scale of the neural network that could be built is limited by memory capacity. Development Background In recent years, deep learning has been gaining attention as a machine learning method that emulates the structure of the human brain. Issues. What is fog computing (fog networking, fogging)? - Definition from WhatIs.com. Fog computing, also known as fog networking or fogging, is a decentralized computing infrastructure in which data, compute, storage and applications are distributed in the most logical, efficient place between the data source and the cloud. 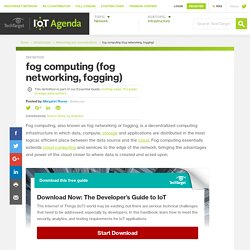 Fog computing essentially extends cloud computing and services to the edge of the network, bringing the advantages and power of the cloud closer to where data is created and acted upon. By submitting your personal information, you agree that TechTarget and its partners may contact you regarding relevant content, products and special offers. You also agree that your personal information may be transferred and processed in the United States, and that you have read and agree to the Terms of Use and the Privacy Policy. With IT Operations Analytics, Data Is Everything. 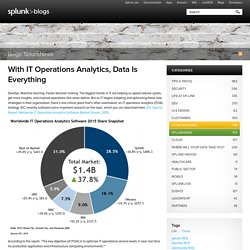 Machine learning. Faster decision making. CTO Blog. This is my second CTO blog on VMware and the Internet of Things (‘IoT’). 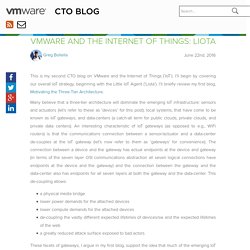 I’ll begin by covering our overall IoT strategy, beginning with the Little IoT Agent (‘Liota’). I’ll briefly review my first blog, Motivating the Three-Tier Architecture. Many believe that a three-tier architecture will dominate the emerging IoT infrastructure: sensors and actuators (let’s refer to these as ‘devices’ for this post); local systems, that have come to be known as IoT gateways; and data-centers (a catch-all term for public clouds, private clouds, and private data centers). An interesting characteristic of IoT gateways (as opposed to e.g., WiFi routers) is that the communications connection between a sensor/actuator and a data-center de-couples at the IoT gateway (let’s now refer to them as ‘gateways’ for convenience). These facets of gateways, I argue in my first blog, support the idea that much of the emerging IoT infrastructure will be three-tier. Forbes Welcome. What is fog computing (fog networking)? - Definition from WhatIs.com. 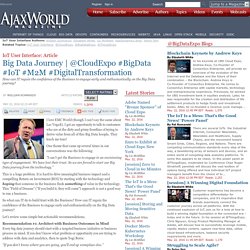 I get an opportunity to talk to customers who are at the dirty and grimy frontline of trying to derive value from all of this Big Data hoopla. They teach me tons! One theme that came up several times in our conversations was the following: "I can't get the Business to engage in an envisioning type of engagement. We have lost their trust. This is a huge problem. So what can IT do to build trust with the Business? Let's review some simple but actionable recommendations. HP Removes Memristors from Its 'Machine' Roadmap Until Further Notice.

One year after Hewlett-Packard launched its ambitious “this will change everything” project called “The Machine,” the company is making some concessions to its initial vision, something it says is necessary in order to deliver a working prototype by next year. 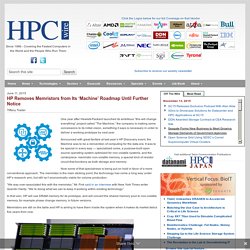 Announced with great fanfare at last year’s HP Discovery event, the Machine was to be a reinvention of computing for the data era. Three Cloud Terrors to Watch Out For - Cloud Technology Partners. 1. 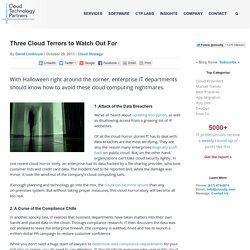 Attack of the Data Breachers We’ve all heard about updating encryption, as well as disallowing access from a growing list of IP addresses. EMC - Get Started with ECS Test Drive. Is building a container runtime, Rocket. Try it out: View the latest rkt docs or sample systemd units. rkt is a new container runtime, designed for composability, security, and speed. 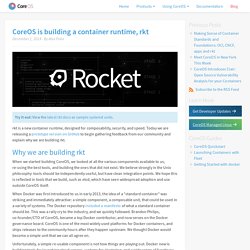 What is coreos. Cloud Foundry. Ian Huston and Alexander Kagoshima of Pivotal Labs delivered a presentation at the Cloud Foundry Summit 2015 demonstrating how they have used Cloud Foundry to deliver data-driven applications to clients. Data scientists synthesize a wide range of skills in their efforts to understand complex data sets and deliver insights, and Cloud Foundry enables practitioners to quickly get to work, rather than losing time setting up servers or performing operations tasks.

During their talk, the pair detailed the ways that Cloud Foundry can simplify data science workflows and deliver insights to users. The Cloud Foundry Summit took place in Santa Clara back in May and brought together a large group of passionate people to discuss all things Cloud Foundry. In this episode, host Simon Elisha shares the full playlist of sessions recorded from the event and highlights some of the interesting sessions that were his "pick of the bunch" and why he liked them.