Quick, Draw! Kern Type, the kerning game. Relación de los Clientes con los Vendedores, en un entorno real (Español) The Stock Photobomber. JAMES FACE - OLI + ALEX. A Tribute To Clients From Hell. I have worked with clients as a freelancer for years now, and like most of you, I have met many a client from hell. 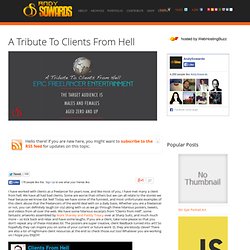 We have all had bad clients. Some are worse than others but we can all relate to the stories we hear because we know dat feel! Today we have some of the funniest, and most unfortunate examples of this client abuse that the freelancers of the world deal with on a daily basis. Whether you are a freelancer or not, you can definitely laugh (or cry) along with us as we go through these hilarious posters, tweets, and videos from all over the web. We have some hilarious excerpts from “Clients from Hell”, some fantastic artworks assembled by Mark Shanley and Paddy Treacy over at Sharp Suits, and much much more – so kick back and relax and have some laughs. Hilarious book. Dealing With Nightmare Clients Here There Be Dragons! 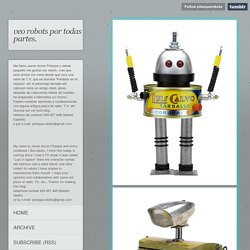 Espero vuestras opiniones y colaboraciones con alguna antigua pieza de radio, T.V, etc. Gracias por ver este blog. teléfono de contacto 629 457 448( Madrid España) ó por e-mail: pitarque.robots@gmail.com My name is Javier Arcos Pitarque and since childhood I like robots, I think this hobby is coming since I saw a TV show: it was called "Lost in Space" there the character named will robinson had a robot friend, now after collect tin robots I have started to manufacture them myself. I hope your opinions and collaborations with some old piece of radio, TV, etc.. Thanks for viewing this blog. Awful client feedback. In the spirit of Clients from Hell, several Irish creative companies joined forces on a series called “Sharp Suits”… Ad creatives, designers, animators, directors, illustrators and more took time out to dress up their favourite worst feedback from clients, transforming quotes that would normally give you a twitch, into a diverse collection of posters. 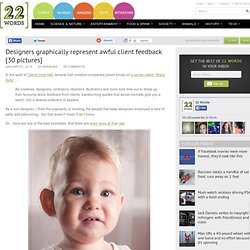 As a non-designer, I think the popularity of mocking the people that keep designers employed is kind of petty and patronizing…but that doesn’t mean it isn’t funny. So…here are lots of the best examples. And there are even more at their site… Clients From Hell. Photoshop Tutorial Rap. TV advertising - sexist? Webcam Toy - Take photos online with over 60 fun camera effects. Bent Objects. Iconscrabble. THE DIRECTORS BUREAU SPECIAL PROJECTS. 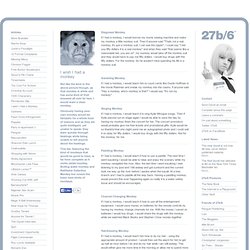 Then if anyone said "Thats not a real monkey, it's just a monkey suit, I can see the zipper", I could say "I bet you fifty dollars it is a real monkey" and when they said "that seems like a reasonable bet, you are on", my monkey would take off the monkey suit and they would have to pay me fifty dollars. I would buy drugs with the fifty dollars. For the monkey. So he wouldn't mind spending his life in a monkey suit. Gambling Monkey If I had a monkey, I would teach him to count cards like Dustin Hoffman in the movie Rainman and sneak my monkey into the casino. Singing Monkey If I had a monkey, I would teach it to sing Kylie Minogue songs. Paddling Monkey.