John Waters discusses 50 years of John Waters movies, and why he refuses to go backward. 16mm. Junkopia - A Short Film by Chris Marker. How to Use Old Lenses with New Digital Cameras (with Bonus Video) They say time flies when you’re having fun. 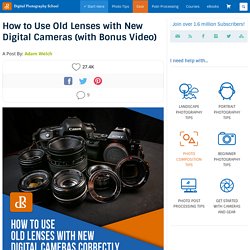 I’ve been having so much fun that I realize it has been over six years since I first talked to you about how to use old lenses with new digital cameras. A lot has changed when it comes to going about using vintage camera lenses with our modern digital camera bodies. Well, things haven’t exactly changed but have rather “progressed” from where they were just a few years ago. 16mm film - converting 35mm lenses to use with 16mm. The lens and other problems in Super 16 conversions. 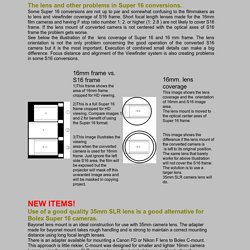 Some Super 16 conversions are not up to par and somewhat confusing to the filmmakers as to lens and viewfinder coverage of S16 frame. Short focal length lenses made for the 16mm film cameras and having F stop ratio number 1: 2. or higher (1: 2.8 ) are not likely to cover S16 frame. If the lens mount of converted camera is not centered with the optical axes of S16 frame the problem gets worse. See below the illustration of the lens coverage of Super 16 and 16 mm frame. The lens orientation is not the only problem concerning the good operation of the converted S16 camera but it is the most important. How to Superimpose with a Bolex Movie Camera. Bolex Rewind Key (EZLWWUHLR) by sixteenmillimeter. London Film-Makers' Co-op. Baltic Analog Lab / About. Luxonline - Educational Resource about British Film and Video Artists.

The Film-Makers' Cooperative. Lab Film process and editing Tacita Dean. On Tuesday last week, the staff at Soho Film Laboratory were told by their new owners, Deluxe, that they were stopping the printing of 16mm film, effective immediately. 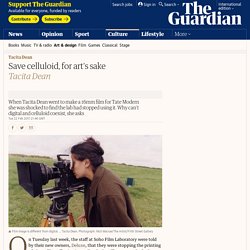 Len Thornton, who looks after 16mm, was told he could take no new orders. That was it: medium eviction without notice. This news will devastate my working life and that of many others, and means that I will have to take the production of my work for Tate Modern's Turbine Hall commission out of Britain. Soho Film Lab was the last professional lab to be printing 16mm in the UK.

In recent years, as 16mm has grown as a medium for artists, the lab has been inundated with work, both from this country and abroad. These last few days have been like having my bag stolen and remembering, bit by bit, what I had inside it. When I have finished, I take my reel of taped film, now called my cutting copy, to a negative cutter, who cuts the original negative and delivers it to the lab, which then prints it as a film. BEEF Members – BEEFBRISTOL – Bristol Experimental and Expanded Film. Home - aemi. Www.filmlabs.org. Artist-run film labs implement an original way of using production tools, through their collective organizations, for filmmakers and artists currently working with celluloid film. 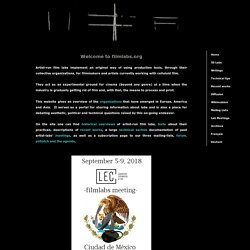 They act as an experimental ground for cinema (beyond any genre) at a time when the industry is gradually getting rid of film and, with that, the means to process and print. This website gives an overview of the organizations that have emerged in Europe, America and Asia. It serves as a portal for sharing information about labs and is also a place for debating aesthetic, political and technical questions raised by this on-going endeavor.

On the site one can find historical overviews of artist-run film labs, texts about their practices, descriptions of recent works, a large technical section documentation of past artist-labs’ meetings, as well as a subscription page to our three mailing-lists, forum, potlatch and the agenda. This website was started following the 2005 lab meeting in Brussels. 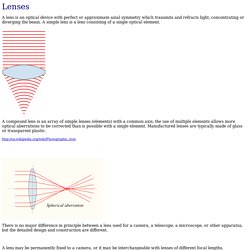 A simple lens is a lens consisting of a single optical element. A compound lens is an array of simple lenses (elements) with a common axis; the use of multiple elements allows more optical aberrations to be corrected than is possible with a single element. Manufactured lenses are typically made of glass or transparent plastic. There is no major difference in principle between a lens used for a camera, a telescope, a microscope, or other apparatus, but the detailed design and construction are different. A lens may be permanently fixed to a camera, or it may be interchangeable with lenses of different focal lengths, apertures, and other properties. The two main optical parameters of a photographic lens are the maximum aperture and the focal length.

The angle of view is the area of the image captured by the image sensor, expressed as an angle. Shooting on 16mm Film. Splicing Film. (Editor.... 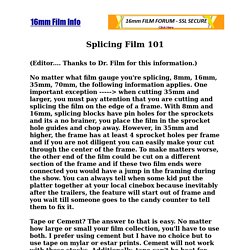 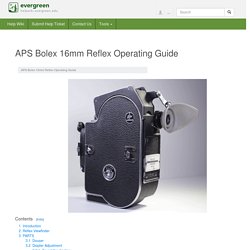 It is an extremely versatile, portable, dependable, well built camera. The optical system permits through-the-lens viewing at all times. Eiki 16mm Projector: Setting up & Threading. What is color temperature: free photography cheat sheet. Understanding color temperature is one of the crucial rules of photography you must learn before you can begin to break them. 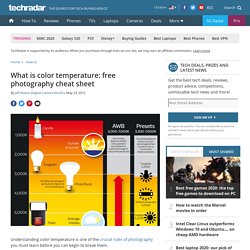 So what is color temperature? In short, each light source has its own individual color, or 'color temperature', which varies from red to blue. Candles, sunsets and tungsten bulbs give off light that's close to red (hence the 'warm' look they give to pictures), whereas clear blue skies give off a 'cool' blue light. It's fairly obvious stuff once you read it. Color temperature is typically recorded in kelvin, the unit of absolute temperature. To boldly go, A starters guide to handmade and D.I.Y films by Esther Urlus.