Gil_Mualem_Doron. V4ULT. En la Ciudad. This project was initiated in 1976 by Eugeni Bonet (from Barcelona) and José Miguel Gómez (from Madrid, although he eventually left the project) and edited later by In Vitro in 1997. 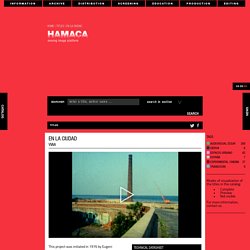 These pieces situate us at the edge of a Spain in transition, leaving behind the dictatorship of Francisco Franco, after he had died in 1975, and headed towards 1977, year in which the first democratic elections took place and the deadline for authors to answer the open call to participate in this project on urban spaces. The country's economic recuperation, progressive industrialization, and the mutation of urban areas with the transformation of neighborhoods and centers, are the starting points for an analysis that extends and includes cities like Paris or New York. Icarus Films: Electric Signs. New screen-based sign systems are putting TV-style advertising into the public domain in cities around the globe. 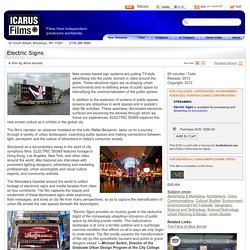 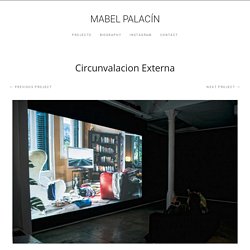 It refers to ring roads in cities that connect different urban and suburban areas (center-periphery), the scenes in the installation explore diverse contexts of contemporary cities. The same image is seen in two different places, two very different domestic indoors. A television displays an image for no one,as the two places are empty. The only character that does appear in the image is absorbed by it, in what we might call the “inner image”, he is alone and records himself. The action of the character is dotted with some other images that show empty cities in which automation still work, but in use for no one. Architecture is everything - CAMPO.

CAMPO and Black Square contributed to a week long workshop in Rome and curated the following exhibition, all to be featured in their upcoming publication. 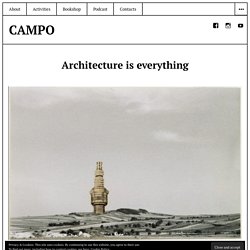 Everyone is an architect. Everything is Architecture.– Hans Hollein. “Taking Measures Across the American Landscape” by James Corner and Alex McLean. The dark sides of tourism, an exhibition by Raumplan at Campo gallery in Rome. “City Killers. 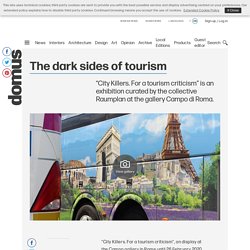 How We See: Photobooks by Women – British Journal of Photography. How We See - Photobooks by Women, edited by Russet Lederman, Olga Yatskevich, and Michael Lang 10x10 Photobooks' latest project presents 100 historically significant photobooks by women, as selected by female photography experts History confirms it – the first photobook was made by a woman, with British photographer Anna Atkins publishing Photographs of British Algae: Cyanotype Impressions in 1843, a year before Henry Fox Talbot’s The Pencil of Nature. 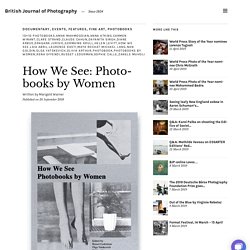 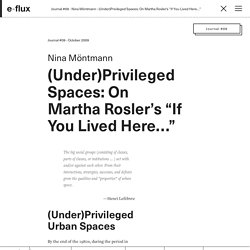 From their interactions, strategies, successes, and defeats grow the qualities and “properties” of urban space. —Henri Lefèbvre (Under)Privileged Urban Spaces. Map of the Abandoned Future - www.reginademiguel.net. The points of departure of this project where geographical maps that illustrate economic and industrial development, in conjunction with the definition given by Ignasi de Solá Morales regarding the term: Terrain Vague (an awaiting place, potentially profitable while being part of a double condition: vacant, void, unproductive…at the same time undefined, unlimited …) bound to the “abandoned futures” described by Robert Smithson when alluding those “empty” spaces contained in the city, conforming a grid of nomad spaces. 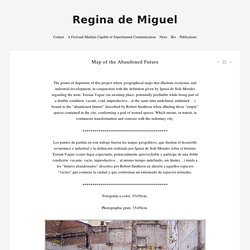 Which means, in transit, in continuous transformation and osmosis with the sedentary city. Fotografía a color, 35×50cm. Photographic print, 35×50cm. ISABEL LÖFGREN » Walkscapes. ‘Walls Paper’, Gordon Matta-Clark, 1972. Wallspaper is a multi-part installation comprising photographs and newsprint, which Gordon Matta-Clark presented at the artist-run space 112 Greene Street in New York in 1972. 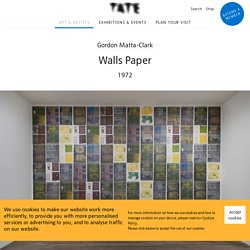 Earlier that year, he took various black and white photographs of derelict and semi-demolished project houses in the Bronx and the Lower East Side of New York City. As only the facades of the buildings had been taken down, the photographs reveal the interior walls of the houses. Case Studies – Nonument. Metrópolis - Regina de Miguel.

Constrained Cities – [ AOS ] Art is Open Source. What happens when filter bubbles manifest themselves in the physical space of the city? 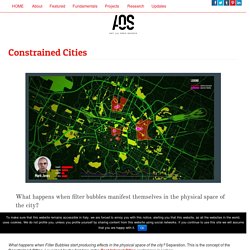 Constrained Cities is an exploration of data-driven separation and segregation in the city of data. What happens when Filter Bubbles start producing effects in the physical space of the city? Separation. This is the concept of the Constrained Cities. Launched for the first time at the Post Internet Cities conference in Lisbon. The Passerby (NB) – ester partegàs. The Passerby (2017) recreates a street market, a common public space that alludes to the generic, anonymous and ubiquitous landscapes we are so familiar with. The work itself consists of translucent polyurethane scrims that have been directly cast from the common polyethylene tarps used to protect and shelter people and goods.

Hanging from steel structures that recreate the labyrinthine layout of a market, the viewer is obliged to move amongst the tarps, engaging with the myriad of lights and colors their creases and textures convey. In the words of the artist “the sculptures capture a meeting of the material with the absent body of the citizen, and stand for the remnants of encounters of people and goods coming together and separating. It is in these fleeting experiences where the communal becomes intertwined with the individual, and the political blends into the private body.

DynamiCity Tactics for a Changing Metropolis= Emiliano Gandolfi Our cities are becoming dynamic. A NEW AMERICAN PICTURE - A New American Picture depicts American street scenes, located using the internet platform Google Street View. Over a four-year period, Rickard took advantage of Google’s massive image archive to virtually explore the roads of America looking for forgotten, economically devastated, and largely abandoned places. After locating and composing scenes of urban and rural decay, Rickard re-photographed the images on his computer screen with a tripod- mounted camera, freeing the image from its technological origins and re-presenting them on a new documentary plane.

The low-resolution images that Rickard favors have a dissolved, painterly effect, and are occasionally populated with figures who acknowledge the camera, but whose faces are blurred, masking their identity. The photographs are thus imbued with an added surrealism and anonymity, which reinforces the isolation of the subjects and emphasizes the effects of an increasingly stratified American social structure. John Fekner.