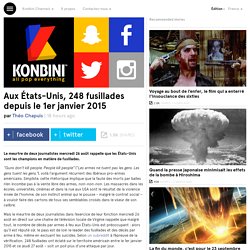 Sixteen cast members of The Wire returned to Baltimore on Saturday to read stories of the city’s recent riots. 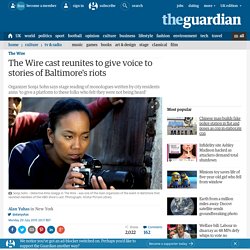 Fans saw Omar, Bunk, Kima and McNulty (Michael Kenneth Williams, Wendell Pierce, Sonja Sohn and Dominic West) reunited on stage to read monologues written by residents for Wired Up, a production at the city’s Artscape event. One of the occasion’s main organizers, Sonja Sohn (who played Detective Kima Greggs in the show), told the Baltimore Sun she wanted to “give back” to the city where the HBO hit was set, and to give residents a microphone. Etats-Unis: une plongée dans l’ordinaire raciste de la police de Ferguson. Another-Witness-in-Michael-Brown-Shooting-Found-Dead. The man has been identified as a 23-year-old black man who testified during the grand jury proceedings over the killing of Michael Brown by former police officer Darren Wilson. 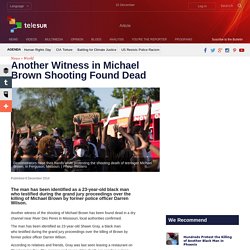 Another witness of the shooting of Michael Brown has been found dead in a dry channel near River Des Peres in Misssouri, local authorities confirmed. The man has been identified as 23-year-old Shawn Gray, a black man who testified during the grand jury proceedings over the killing of Brown by former police officer Darren Wilson. What I've Learned from Two Years Collecting Data on Police Killings. A few days ago, Deadspin’s Kyle Wagner began to compile a list of all police-involved shootings in the U.S. 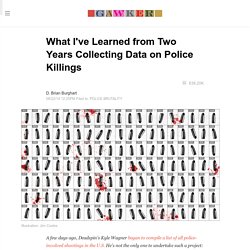 He’s not the only one to undertake such a project: D. Brian Burghart, editor of the Reno News & Review, has been attempting a crowdsourced national database of deadly police violence. We asked Brian to write about what he’s learned from his project. It began simply enough. Etats-Unis : trois crimes racistes posent la question de l'autonomie des commissariats. From Cairo to Moscow: how the world reacted to Ferguson. Russia, China and other authoritarian regimes around the world reacted to violent protests in Ferguson with thinly disguised glee and schadenfreude on Tuesday, noting that the scenes of unrest in Missouri undermined the US’s credibility to criticise other countries on human rights. 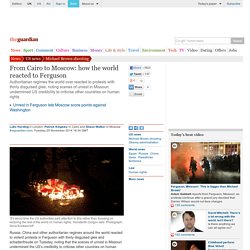 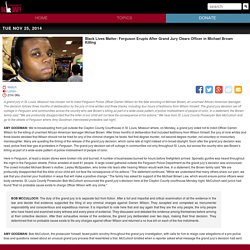 Louis, Missouri where, on Monday, a grand jury voted not to indict Officer Darren Wilson for the killing of unarmed African-American teenager Michael Brown. After three months of deliberation that included testimony from Wilson himself, the jury of nine whites and three blacks decided that Wilson should not be tried for any of the criminal charges he faced. Not first-degree murder, not second-degree murder, not voluntary or involuntary manslaughter. Many are questing the timing of the release of the grand jury decision, which came late at night instead of in broad daylight. Soon after the grand jury decision was read, police fired tear gas at protesters in Ferguson. Watch what happened on Twitter when the Darren Wilson grand jury decision was announced. Michael Brown Protesters Stage 'Die-In' In St. Louis. In Ferguson, coordinated acts of disobedience as protests evolve. Correction: An earlier version of this article said that Ferguson, Mo., police had deployed tanks during earlier protests. 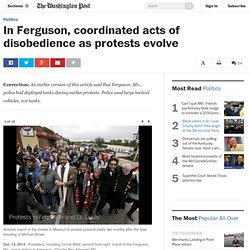 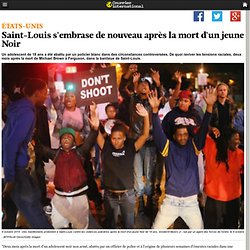 De Ferguson aux « zones urbaines sensibles » : la militarisation de la police n’est pas une spécificité états-unienne. Requiem for Mike Brown protest in the St. Louis Symphony exposes both white privilege and support. At 0:36 seconds into the video, a symphony attendee can be overheard calling Mike Brown "a thug" and "a criminal" as the protestors peacefully proceeded with their singing. 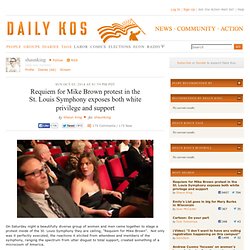 At 0:57 in the video, when he was asked to say it again for the camera, he smiles awkwardly (see below) and refuses to do so. The lady he was with was heard by Rebecca Rivas uttering profanity throughout the protest as well, @NaYaKnoMi @colleenkelly @organizemo Not sure. I asked him to repeat it and he just gave me that grin. Ferguson ou la terrible réalité de l'Amérique noire. Les événements dans la petite ville du Missouri ne sont qu'un aperçu de ce que vivent de nombreux Noirs aux Etats-Unis. 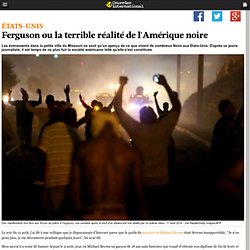 Ferrell's family. A family attorney and representatives of the NAACP questioned whether race played a role in the shooting of the black man by a white officer. Ferrell's family said the former Florida A&M University football player moved to Charlotte about a year ago to be with his fiancee and was working two jobs. He wanted to go back to school and eventually become an automotive engineer.

Not terribly long ago in a country that many people misremember, if they knew it at all, a black person was killed in public every four days for often the most mundane of infractions, or rather accusation of infractions – for taking a hog, making boastful remarks, for stealing 75 cents. For the most banal of missteps, the penalty could be an hours-long spectacle of torture and lynching. No trial, no jury, no judge, no appeal. Now, well into a new century, as a family in Ferguson, Missouri, buries yet another American teenager killed at the hands of authorities, the rate of police killings of black Americans is nearly the same as the rate of lynchings in the early decades of the 20th century.

About twice a week, or every three or four days, an African American has been killed by a white police officer in the seven years ending in 2012, according to studies of the latest data compiled by the Federal Bureau of Investigation. Comic Relief: Jon Stewart Takes Down Fox News’ Take on Ferguson. Ferguson chief: Officer didn't stop Brown as rob suspect. Your video will begin momentarily. Report: St. Louis County Police To Be Withdrawn From Duty After Ferguson Protests. The St. Louis County Police Department will no longer be involved in policing Ferguson, Missouri, the suburban community rocked by protests after the death of an unarmed black teenager who was shot by a police officer last week.

Ferguson protests continue after second police shooting. We’re bringing our live coverage of Ferguson to an end for now. After an hour or so of chaos, police have allowed people to walk through police lines and head home. The situation is now much calmer, but confusion about exactly what happened, and what tactics the police were employing, remain. There is a general consensus that a dramatic response by authorities was prompted by someone throwing a bottle from within the protest crowds, shortly after the protest was called to an end by organisers. The last few hours’ events were much calmer than previous nights. The oft-mentioned “outside aggressors” that protesters and their supporters are quick to distance themselves from, were seen trying to prompt reactions from police, including, allegedly throwing rocks.

One person was seen being put into an ambulance. Protesters have scheduled another protest outside the office of St Louis prosecutor Bob McCulloch on Wednesday morning. Protests appear to ended for night. Emeutes de Los Angeles : les sources culturelles du nouveau radicalisme noir, par Achille Mbembe. Émeutes aux Etats-Unis : les méthodes policières critiquées, la mobilisation s’étend. White man jaywalks with gun...guess what happens? When I saw this video posted here recently, I had to go back and look at it again. I saw a white man with a gun. I heard a policeman saying, "Place the weapon down on the ground, please. ... are crossing the street illegally ... I need you to put the gun down before I talk to you. ... You have committed a crime ... you are jaywalking. ...