After Brexit, Emerald City wants to be the startup hub of Europe. The race is on between Emerald City, Narnia, Gotham City, Smallville, Bedrock and Mos Eisley. 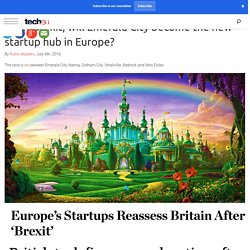 Or could it be London? Brexit is like a burglary when it comes to the tech and venture capital industries — Quartz. New startup lexicon for Europe courtesy Brexit. By :CIOL Writers|June 27, 20160 Image Courtesy LinkedIn.com Brexit vote is nothing short of a tight punch in the face of European startup scene and we seriously don’t know if Europe can recover from it.

In any tumultuous change, the weakest entities suffer the most, and in business, who can be the ones most exposed to the effects of the Brexit by definition? Startups, of course. And they might want to learn a new lexicon of Brexit-styled terms that’s coming their way. Eurogration When millions of refugees pile into Europe, top entrepreneurs will flee for brighter funding prospects. #Brexit: Berlin to shoot past London as Euro startup capital? By Hadlee Simons on 27 June, 2016 2 Britain’s plans to leave the European Union (EU) will be good news for Germany’s startup scene, a major German venture capital provider said. 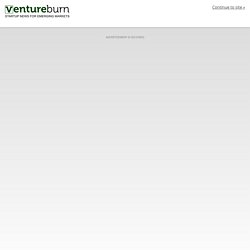 Uk.businessinsider. London v. Berlin: Which startup ecosystem will lead Europe? Germany and the U.K. dominated the European exit scene in 2015, with the Israelis, French and Spanish close behind (London: CC-BY-SA 3.0 David Iliff via Wikimedia Commons; Berlin: CC BY 2.0 Robert Debowski via Wikimedia Commons) Data shows London has the clear lead, but movements on the ground and stats show that change might be coming Comparing two cities’ startup scenes is difficult. 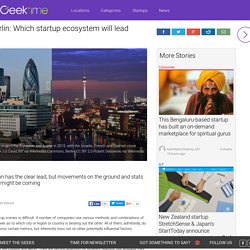 The World’s Leading Cities for Startups and Innovation. Silicon Valley and the San Francisco Bay Area have long been the world leaders in high-tech startups, giving rise to cutting-edge companies from Apple and Intel to Google, Facebook, and Twitter. 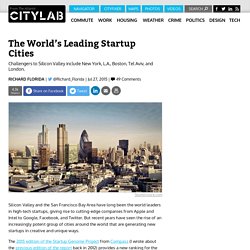 But recent years have seen the rise of an increasingly potent group of cities around the world that are generating new startups in creative and unique ways. The global startup ecosystem report 2015. Startup Genome. Berlin can now usurp London as startup capital of Europe. Flag of Berlin CC BY 2.0 Conan via Flickr Berlin was already surging to the top of the global startup city list, but with London’s status now in limbo, Berlin stands to benefit Startups are not the only ones digesting the shock result this weekend. 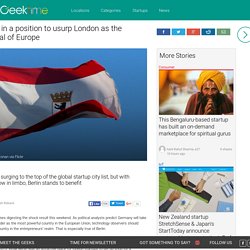 As political analysts predict Germany will take a larger role as a global leader as the most powerful country in the European Union, technology observers should expect the same for the country in the entrepreneurs’ realm. That is especially true of Berlin. Last year, we compared Berlin to London and found that London was indeed still well ahead of its German counterpart as a European startup leader. While London’s economic clout is still substantial, over time we will see other cities market itself as the gateway to European commerce. Berlin will have competition: Ireland offers strong tax incentives for foreign companies, while Estonia offers e-residency for companies to take advantage of some EU perks. Germans get ready to pounce? 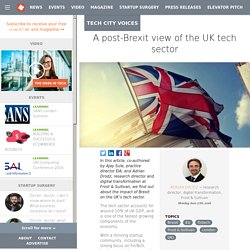 Tech after Brexit: Where do we go from here? Only last week the UK bosses of some of the world's biggest technology companies warned that exiting -- aka Brexiting -- the European Union would undermine the country's tech sector and would mean firms and their customers face "significant and prolonged uncertainty and leave the UK side-lined". 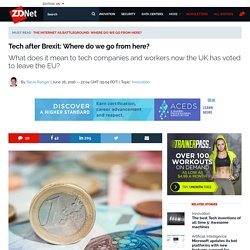 Now it looks like we will soon be able to find out if their warning was right. Tech industry watching Brexit shakeout. The full impact of the United Kingdom’s vote to leave the European Union won’t be known for a long time. 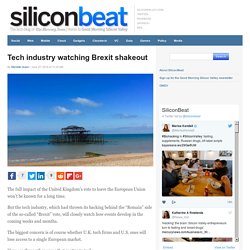 But the tech industry, which had thrown its backing behind the “Remain” side of the so-called “Brexit” vote, will closely watch how events develop in the coming weeks and months. The biggest concern is of course whether U.K. tech firms and U.S. ones will lose access to a single European market. Here are three other areas that matter to tech: Labor: For tech companies headquartered in the U.K., being part of the E.U. meant that they could recruit talent easily between European countries. Greater focus on UK tech talent essential in face of Brexit.

On the morning of 24 June 2016, the UK awoke to the realisation that it would be leaving the European Union. 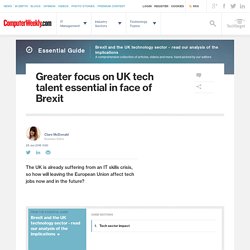 Many people, both within and outside of the technology sector, now fear for their jobs and their future, and experts have claimed the decision to leave will result in budget cuts and difficulty attracting IT talent to the UK. By submitting your email address, you agree to receive emails regarding relevant topic offers from TechTarget and its partners. Brexit fallout will damage ICT sector across Europe. The UK vote to leave the EU is having an instant impact on investment in the information and communications technology (ICT) sector, according to Francois Mazoudier, managing partner at Tech Leaders Capital and a serial entrepreneur. “Forty-eight hours after the vote, I already received a call from a UK tech start-up I'm advising,” he said.

“With two UK investors lined up to complete this week, they decided to review their options and let things settle down a bit: in other words, no deal until further notice.” Up to this point, entrepreneurs regarded the UK as an attractive place to found digital start-ups, despite the high cost of living in the main technology hubs of London and Cambridge. More than one in five of the directors of the 27,395 new tech businesses founded in the UK in 2014 were foreign nationals, according to research firm DueDil.

Unless Britain finds a way to undo its decision to leave the , London’s days as the pre-eminent global financial capital, ranked even ahead of New York, may be numbered. I spoke this week to several high-ranking executives at major financial institutions that collectively employ tens of thousands in London. While none of them have any immediate plans to move their European headquarters from Britain’s capital, all agreed they would eventually shift a significant number of highly paid employees to cities that remain in the European Union. After Brexit, the race is on to replace London as Europe’s startup capital — Quartz. “Thanks to Brexit,” reads the title of an email from the Dublin commissioner for startups sent this morning. “Thanks to Brexit we have a new opportunity to attract Europe’s serial or first-time entrepreneurs to set up shop in Dublin,” the email, from the organization tasked with boosting tech startup activity in Ireland’s capital, continues.

“With Brexit comes opportunity. Let’s not waste it.” London’s favored status among startups seeking a European base is in peril, and its counterparts on the continent are wasting no time in announcing themselves as worthy alternatives. Besides Dublin, there’s Berlin, already home to successes including Rocket Internet and Soundcloud; Amsterdam, which has spawned the major payments player Adyen; and Stockholm, with Spotify and Minecraft’s maker, Mojang. After Brexit, the race is on to replace London as Europe’s startup capital — Quartz. Berlin bids to replace London as post-Brexit fintech capital. STANDARD DIGITAL Limited Time Offer Access to FT award winning news on desktop, mobile and tablet Personalised email briefings by industry, journalist or sector Portfolio tools to help manage your investments FastFT - market-moving news and views, 24 hours a day All the benefits of a standard digital subscription plus:

Brexit: 8 cities that might replace London as FinTech capital of Europe. Τεχνόπολις - Γκάζι - ΑΡΧΙΚΗ ΣΕΛΙΔΑ. StartupDelta. Canary Wharf is a London fintech hub says report. London ranks first in European Digital City Index. October 26, 2015 in -e.online Which European city ranks number one for in the European Digital City Index for supporting digital entrepreneurs? That would be London, ahead of Amsterdam and Stockholm. It’s difficult to get over its hard advantages, you see. Not only is London’s venture capital industry the most developed in Europe, but the presence of so many financial services firms clearly helpspromote a growing number of fintech and crowdfunding start-ups — think Seedrs, Funding Circle, Transferwise et al. Plus, London is also the accelerator and co-working capital of Europe, while its start-up scene is supported by a strong creative cluster around Silicon Roundabout. However, the downside is the UK capital’s spectacular housing and office rental costs.

Fast-growing Berlin ranks just seventh. There may be some surprise that Berlin is not ranked higher, but the city is let down slightly by its digital infrastructure score and high cost of labour.