Higgs Boson. The Higgs boson (or Higgs particle) is a particle that gives mass to other particles. Peter Higgs was the first person to think of it, and the particle was found in March 2013. It is part of the Standard Model in physics, which means it is found everywhere. It is one of the 17 particles in the Standard Model. The Higgs particle is a boson. Bosons are particles responsible for all physical forces except gravity. It is very difficult to detect the Higgs boson with the equipment and technology we have now. Higgs bosons obey the conservation of energy law, which states that no energy is created or destroyed, but instead it is transferred. Higgs bosons are used in a variety of science fiction stories. Possible claims[change | edit source] On 4 July 2012, the teams at the Large Hadron Collider declared that they had discovered a particle which they think is the Higgs boson.[2] References[change | edit source] Other websites[change | edit source]

Salvation (Christianity) Historical Perspectives. Written by: Julia Hardy Zen has become a pop culture phenomenon in the West, especially in the United States. American Civil War. The American Civil War was one of the earliest true industrial wars. 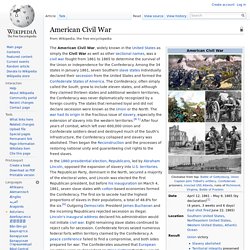 Railroads, the telegraph, steamships, and mass-produced weapons were employed extensively. Methodism. Heaven's Gates, Hell's Flames. Heaven's Gates, Hell's Flames is a touring evangelistic drama that has been performed worldwide. The tagline on the official website asks, "Where will you be when reality strikes? ". It is based on an evangelical presentation of the Gospel, and presents the Biblical message that one must believe in Jesus Christ in order to be saved and go to Heaven, or otherwise face eternal punishment in Hell.

The play takes the form of a series of skits in which various characters are "unexpectedly" killed, and then immediately find out whether they are destined for heaven or hell. If they have refused to believe, they fail to be born again, they are consequently sent into eternal existence in Hell, represented by red lights and a literal Satan. If they have received Jesus as Lord of their life he is their Savior and they are, lovingly, welcomed into Heaven, depicted by a white-robed Jesus, dazzling white lights and a chorus of angels. Anglicanism. Modern Physics and Ancient Faith. Gaudiya Vaishnavism. Gaudiya Vaishnavism (also known as Chaitanya Vaishnavism[1] and Hare Krishna) is a Vaishnava religious movement founded by Chaitanya Mahaprabhu (1486–1534) in India in the 16th century. "Gaudiya" refers to the Gauḍa region (present day Bengal/Bangladesh) with Vaishnavism meaning "the worship of Vishnu".

Its philosophical basis is primarily that of the Bhagavad Gita and Bhagavata Purana, as well as other Puranic scriptures and Upanishads such as the Isha Upanishad, Gopala Tapani Upanishad, and Kali Santarana Upanishad. Philosophical concepts[edit] Living beings[edit] Release from the process of samsara (known as moksha) is believed to be achievable through a variety of yoga processes. Supreme Person (God)[edit] Patriot Act. The USA PATRIOT Act is an Act of Congress that was signed into law by President George W. 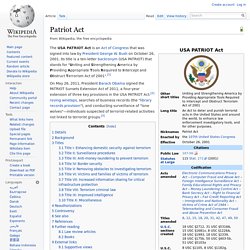 Bush on October 26, 2001. Patient Protection and Affordable Care Act. The ACA was enacted with the goals of increasing the quality and affordability of health insurance, lowering the uninsured rate by expanding public and private insurance coverage, and reducing the costs of healthcare for individuals and the government. 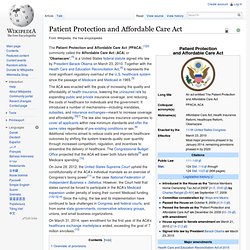 It introduced a number of mechanisms—including mandates, subsidies, and insurance exchanges—meant to increase coverage and affordability.[6][7] The law also requires insurance companies to cover all applicants within new minimum standards and offer the same rates regardless of pre-existing conditions or sex.[8] Additional reforms aimed to reduce costs and improve healthcare outcomes by shifting the system towards quality over quantity through increased competition, regulation, and incentives to streamline the delivery of healthcare. 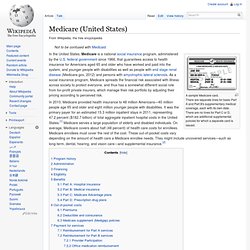 There are separate lines for basic Part A and Part B's supplementary medical coverage, each with its own date. There are no lines for Part C or D, which are additional supplemental policies for which a separate card is issued. In the United States, Medicare is a national social insurance program, administered by the U.S. federal government since 1966, that guarantees access to health insurance for Americans aged 65 and older who have worked and paid into the system, and younger people with disabilities as well as people with end stage renal disease (Medicare.gov, 2012) and persons with amyotrophic lateral sclerosis.

As a social insurance program, Medicare spreads the financial risk associated with illness across society to protect everyone, and thus has a somewhat different social role from for-profit private insurers, which manage their risk portfolio by adjusting their pricing according to perceived risk. Medicare has several sources of financing. or U.S. 25 Fascinating Facts About the Dead Sea Scrolls @ Century One Bookstore. 1.The Dead Sea Scrolls were discovered in eleven caves along the northwest shore of the Dead Sea between the years 1947 and 1956. 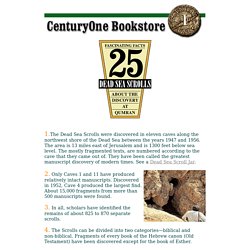 The area is 13 miles east of Jerusalem and is 1300 feet below sea level. The mostly fragmented texts, are numbered according to the cave that they came out of. They have been called the greatest manuscript discovery of modern times. See a Dead Sea Scroll Jar. 2. 3. 4. 5. Amazing and Interesting Facts Generator – Mental Floss.