(Photo manipulation by chiaralily licensed CC BY-NC 2.0) Turtle Island might sound like some far away island in the sea, but it's actually what some Indigenous people call the continent of North America, while others, such as the Ojibwa, use it to refer to the whole world. What is Turtle Island? Pixabay The name Turtle Island comes from First Nations. Flooded ground (Pixabay) (160) Hopi Origin Story. Turtle Island - Deadly Story. 'Turtle Island' is the name for the lands now known as North and Central America. 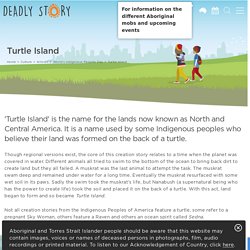 It is a name used by some Indigenous peoples who believe their land was formed on the back of a turtle. Though regional versions exist, the core of this creation story relates to a time when the planet was covered in water. Turtle Island. Native Americans renew decades-long push to reclaim millions of acres in the Black Hills. American Indian History and Heritage. Hopi: Language of Place The Hopi Tribe, a sovereign nation inhabiting over 1.5 million acres in northeastern Arizona, has a rich connection with the environment that pervades their culture and language. 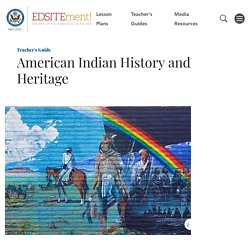 The reverence the Hopi have for corn cultivation is apparent in their art, poetry, songs, and dance celebrations. Language of Place: Hopi Place Names, Poetry, Traditional Dance and Song, is a three-lesson ELA curriculum unit, which guides students’ exploration of Hopi language forms in order to help them to understand the Hopi’s centuries-old relationship with the land and the process of growing corn. Lesson 1 uncovers the Hopi homeland through maps and place names. Students examine regional place names of their own home communities and create personal maps; Lesson 2 involves a close study of contemporary Hopi poet, Ramson Lomatewama. Poetry The foundation of a 21st-century American community is shared respect among individuals who come from different backgrounds, places, and experiences.

'Piecing together a broken heart': Native Americans rebuild territories they lost. More than six decades after a 1,705-acre patchwork of meadows, wetlands and timberland in southern Oregon was taken from the Klamath Tribes, the Native American community has found its way back to the territory – by way of the real estate market. 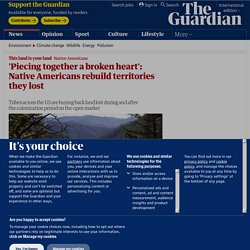 Over the summer, the tribes discovered the land was up for sale, so as part of their large-scale effort to reacquire territory that was historically theirs, they prepared an offer. Although another buyer nearly swooped in, the tribes’ purchase more than doubles their current holdings, and extends their territory to the base of Yamsay Mountain, an important site for prayer and spiritual journeys for the community. Willa Powless, Klamath Tribes’ council member at large, said it was major step toward piecing together a “broken heart”. “Our people are born with a spiritual connection to the land that we all feel and we all know and our elders teach us about,” she said. “I hear elders say, ‘The land doesn’t belong to us, we belong to it.’ Ghana's 'Year Of Return' Encourages Black Americans To Return To Their Motherland. The first enslaved Africans were brought to British colonial North America 400 years ago, setting in motion the transatlantic slave trade. To commemorate this anniversary, the president of Ghana has been welcoming descendants of those enslaved back to the West African nation to reconnect with their roots and invest in the country. Get up to speed on the local coronavirus outbreak and other news Boston is talking about. Add our daily newsletter to your morning routine. Sign up now. “We will work together to make sure that never again will we allow a handful of people with superior technology to walk into Africa, seize our peoples and sell them into slavery,” President Nana Akufo-Addo said in 2018 while announcing the initiative. Native North Americans. In 1492, Christopher Columbus landed in the Caribbean, unlocking what Europeans quickly came to call the ‘New World’. Columbus ‘found’ a land with around two million inhabitants. He thought he had found a new route to the East, so he mistakenly called these people ‘Indians’. Within a hundred years, Europeans were trying to settle in the Americas. With Spanish and Portuguese explorers in the south, English explorers focused on North America. This lesson examines what happened between early English settlers and Native Americans in North America. 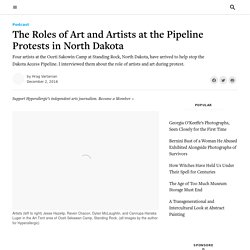 (all images by the author for Hyperallergic) UPDATE, Sunday, December 4, 4:12pm ET: The Army Corp. of Engineers has announced that they will not approve the permits required for the current Dakota Access Pipeline. A Pipeline Is Threatening Native American Culture. The current, generation-defining confrontation in North Dakota, led by members of the Standing Rock Sioux Tribe, is about challenging racism and defending the earth. It is also notably about cultural rights. For those who have not been paying attention: The issue is the multi-billion-dollar, US Army Corps of Engineer-approved Dakota Access Pipeline Project, set to extend 1,172 miles across four states. In North Dakota, the pipeline was originally set to pass near the state capital, Bismarck, but was rerouted when it was deemed a potential threat to the water there. Instead, it was set to pass just a half-mile north of the Standing Rock Sioux Reservation, with Dakota and Lakota leaders saying—logically—that it threatens their own water resources.

When I Remember I See Red: American Indian Art and Activism in California. About the Exhibition Beginning with the occupation of Alcatraz in 1969, California became a beacon of creative freedom, individual expression, and social activism for Native peoples across the country. The region quickly transformed into a place where Native artists engaged with cultural diversity, historical traditions, and contemporary art to critique its colonial past. As a result, California became a site of artistic achievement within the broader story of Native art.

This exhibition features Native California artists who have used their work as a means of cultural resistance and renewal. Many have helped—and continue to help—restore aspects of ceremony, dance, language, and material culture once in danger of disappearing. When I Remember I See Red was conceived by, and is dedicated to, Nomtipom Wintu artist Frank LaPena (1936–2019), a renowned art writer, curator, poet, traditionalist, and professor at Sacramento State University for 40 years. The Roles of Art and Artists at the Pipeline Protests in North Dakota. Solidarity Report from Standing Rock - New Politics. [Editors’ note: The struggle at Standing Rock against the Dakota Access Pipeline (DAPL) was one of the major political mobilizations of 2016, combining the demand for Native rights with the call for environmental justice. New Politics asked Nancy Romer to cover these events for us. She was at Standing Rock from November 10-15.

Her initial report and her article on the meaning of the victory achieved on December 5—and the struggle that still remains—have been posted on the New Politics website. Here we print two more of her dispatches from the scene, showing some of the day-to-day dynamics of standing with Standing Rock.] In this report I will try to give you a sense of what it was like to be at Standing Rock. Native Americans stand by Standing Rock Sioux to defy corporate interests. The Standing Rock Sioux Tribe protest against the construction of a $3.8bn access oil pipeline in North Dakota continues unabated despite the bitter cold.

The state govenor, “Jack” Dalrymple III, used the freezing temperatures as a pretext to evict the protesters for their own protection. However, this is more than plummeting mercury this is native America standing up to corporate interests in a direct clash of cultures. To Native Americans, reparations can vary from having sovereignty to just being heard. This report is part of "Turning Point," a groundbreaking month-long series by ABC News examining the racial reckoning sweeping the United States and exploring whether it can lead to lasting reconciliation. In Oklahoma, the people of the Muscogee Creek Nation Reservation have just won their long-standing fight for sovereignty. In San Francisco, the Ohlone are fighting for a land to call their own.

And in upstate New York, the Iroquois people are demanding that the true history of the United States is told and that the treaties they signed hundreds of years ago are recognized. Native Americans across what is now the United States have been fighting for their land and culture ever since Juan Ponce de León became the first European to invade the country in Florida in 1513. Standing Rock Sioux and Dakota Access Pipeline. Dakota Access Pipeline. Growth Opportunity. Indian Reservations - HISTORY. The Indian reservation system established tracts of land called reservations for Native Americans to live on as white settlers took over their land.

Living Desert. The desert is a unique and highly fragile environment that is culturally valuable to Native communities. How an ‘Urban Rez’ Grew Into a ‘Native Nation’ A performance of "Native Nation" in Phoenix. The Red Deal Is an Indigenous Climate Plan That Builds on the Green New Deal. American Indian and Alaska Native Heritage Month: November 2020. Native Americans (article) Indian reservation. Moonshot: The Indigenous Comics Collection (Volume 3) - LaPensée, Elizabeth, Sheyahshe, Michael. - THE WEST - N. Scott Momaday. Keeper of the Flame "My father was a great storyteller and he knew many stories from the Kiowa oral tradition," says N. John Trudell. Johnny Cash The Talking Leaves. Johnny Cash - Apache Tears. As Gwich'in, we will never stop fighting for our land. Suicide rates, alcoholism among Lakota tribe. A Conversation With Native Americans on Race. Pearl Means: The Spiritual Essence of the Lakota People. Thunder in the Mountains: Chief Joseph, Oliver Otis Howard, and the Nez Perce War - Sharfstein, Daniel.

Tribal Leaders Condemn Final Permit for MN Pipeline & Seek To Halt Imminent Pipeline Construction — Stop Line 3. The Biggest Climate Wins of 2020. POLITICAL AND ENVIRONMENTAL POETRY AND QUOTES. This Land Is Their Land: The Wampanoag Indians, Plymouth Colony, and the Troubled History of Thanksgiving - Silverman, David J. When the World as We Knew It Ended by Joy Harjo. A Map to the Next World by Joy Harjo. The Poetry and Music of Joy Harjo - Poetry Off… Reclaiming the Black Hills – Under-Told Stories Project. Natural Resources Revenue Data. Can Native American Tribes Protect Their Land If They’re Not Recognized by the Federal Government? Jasilyn Charger — Earth Guardians. YOUth Are The Future: Indigenous Rights - FeelGood.

For some Native Americans, Mount Rushmore is a symbol of broken treaties, white domination.