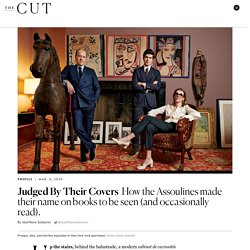 Photo: Jason Schmidt Up the stairs, behind the balustrade, a modern cabinet de curiosités hangs above Fifth Avenue. It is a library guarded by a pair of statuary sheep and scattered here and there with fair-trade woven masks from Africa and vintage Louis Vuitton trunks. Why Chimamanda Ngozi Adichie Considers Her Sister a “Firm Cushion” at. I remember standing at the foot of the long stairway in our new house, too frightened to climb, everything big and unfamiliar, until my sister Uche silently took my hand and we went up together. 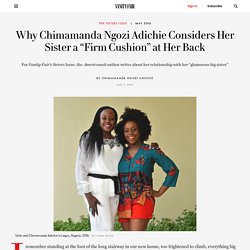 I was 4; she was 15. It is my earliest memory of my attachment to her. But, according to family lore, the attachment started much earlier. I was a fussy baby whose nightly screaming was soothed only by her. Newly weaned, I would eat okra and liver sauce only if she fed me. In my teenage years she was the glamorous big sister who was studying pharmacy at university and had a handsome boyfriend in a white car. Basil davidson. Henry nevinson. Gus casely-hayford. Zora neale hurston. Gobineau the inequality of human races. Le rapport de brazza. Kwame anthony appiah. Yagazie emezi. Kunta Kinte - Wikipedia. Kunta Kinte (c. 1750 – c. 1822) KOON-tah-KIN-tay is a character in the novel Roots: The Saga of an American Family by American author Alex Haley. 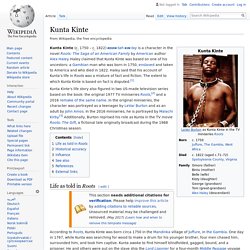 Haley claimed that Kunta Kinte was based on one of his ancestors: a Gambian man who was born in 1750, enslaved and taken to America and who died in 1822. Haley said that his account of Kunta's life in Roots was a mixture of fact and fiction. The extent to which Kunta Kinte is based on fact is disputed.[1] Life as told in Roots[edit] Kunta survived the trip to Maryland and was sold to a Virginia plantation owner in Spotsylvania County, Master Waller, who renamed him Toby. Kunta married an enslaved woman named Bell Waller and they had a daughter whom they named Kizzy (Keisa, in Mandinka), which in Kunta's native language means "to stay put" (he gave her this name in order to protect her from being sold away). Historical accuracy[edit] However, journalists and historians later discovered that Fofana was not a griot.

Influence[edit] See also[edit] My Name Is Kunta Kinte So Do Not Cal;l Me Toby. Kunta Kinte was born in Jeffure Village in Gambia West Africa in the year 1750. 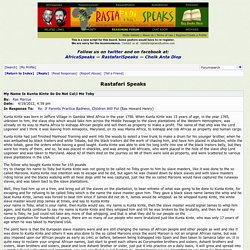 When Kunta Kinte was 15 years of age, in the year 1765, unknown to him, the slave ship which would take him across the Middle Passage to the slave plantations of the Western Hemisphere, was already on its way to Mama Africa to kidnapp African people and sell them as property to make a profit. The name of that ship was the Lord Legoneer and I think it was leaving from Annapolis, Maryland, on its way Mama Africa, to kidnapp and rob Africas as property and human cargo.

Kunta Kinte had just finished Manhood Training and went into the woods to select a tree trunk to make a drum for his younger brother, when he was ambushed by black traiters and white Tobabs, but the black traitors did the work of chasing him, and have him placed in shackles, while the white tobab, gave the orders while having a good laught. 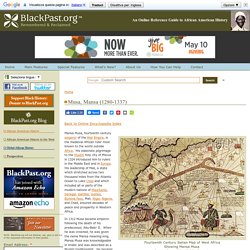 His elaborate pilgrimage to the Muslim holy city of Mecca in 1324 introduced him to rulers in the Middle East and in Europe. Emperor of Mali. Musa I of Mali Emperor of Mali Also known as MousaMusaKankan Mūsā died 1332? 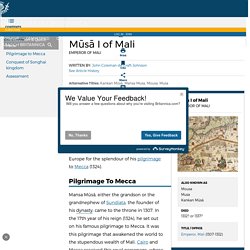 Title / office emperor, Mali (1307-1332) View Biographies Related ToCategories. The life of Mansa Musa, the richest person in history. Mansa Musa, as depicted on a 1375 Catalan Atlas, one of the most important world maps of Medieval Europe.Wikimedia Commons African King Musa Keita I is thought to be the richest person of all time — "richer than anyone could describe," reports Time. 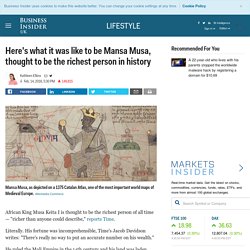 Literally. His fortune was incomprehensible, Time's Jacob Davidson writes: "There's really no way to put an accurate number on his wealth. " He ruled the Mali Empire in the 14th century and his land was laden with lucrative natural resources, most notably gold. "His vast wealth was only one piece of his rich legacy," reports Jessica Smith in a TED-Ed original lesson. Musa I of Mali - Wikipedia. Historical ruler in West Africa Mansa of Mali Nomenclature[edit] Musa Keita was referred to (and is most commonly found) as Mansa Musa in Western manuscripts and literature. 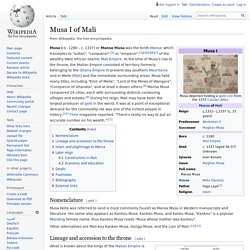 Uk.businessinsider. Meet Mansa Musa I of Mali – the richest human being in all history. When we think of the world’s all-time richest people, names like Bill Gates, Warren Buffet and John D Rockefeller immediately come to mind. 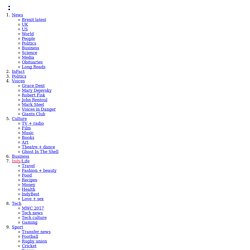 But few would have thought, or even heard of, Mansa Musa I of Mali – the obscure 14th century African king who was today named the richest person in all history. With an inflation adjusted fortune of $400 billion, Mansa Musa I would have been considerably richer than the world’s current richest man, Carlos Slim, who ranks in 22nd place with a relatively paltry $68 billion.

The list, compiled by the Celebrity Net Worth website, ranks the world’s 24 richest people of all time. The list advertises itself as the top 25, but 26 names appear in the list. Although the list spans 1000 years, some aspects of wealth appear consistent throughout history; there are no women on the list, only three members are alive today, and 14 of the top 25 are American. Meanwhile John D. Here’s the full list of the ‘26 richest people of all time’: 1. 2.