Why You Need to Understand Anxiety Disorders. Depressive and Bipolar Disorders: Crash Course Psychology #30. Alcoholism - causes, symptoms, diagnosis, treatment, pathology. Social Stigma .pdf. If Physical Health Problems Were Treated Like Mental Health Problems. Many still steer clear of people with mental illness: Poll, Singapore News. Even as more people are seeking outpatient treatment at the Institute of Mental Health (IMH), more than five in 10 respondents in a recent survey indicated they are unwilling to live with, live nearby or work with a person with a mental health condition.

The survey, which is the first of its kind by the National Council of Social Service (NCSS), found that most people agree that more needs to be done to reduce societal stigma, yet they are also reluctant to accept them on an individual level. In the survey of 1,796 people conducted last year, six in 10 people said they believe that mental health conditions are caused by a lack of self-discipline and willpower, while half believe that persons with mental health conditions should not be given any responsibility. But seven in 10 respondents acknowledged that persons with mental health conditions experience stigma and discrimination in their daily lives, and eight in 10 said they believe the best therapy is for them to be included in society. ‘Crazy, weird, scary’: Survey unveils negative labels youths associate with mental illness. SINGAPORE — Researchers have called for regular and compulsory education on mental health for youths, in the wake of a study that found a large proportion of this group having misconceptions of mental illness.

Almost half (44.5 per cent) of 940 teenage students polled attached negative and pejorative labels to people with mental illness. “Crazy”, “weird”, “scary”, “stupid” and “dangerous” were among the words that came to mind then the respondents heard the term “mental illness”, reported the study, which was presented at the Frontiers in Mental Health symposium organised by the Institute of Mental Health (IMH) and Nanyang Technological University’s Lee Kong Chian School of Medicine on Tuesday (March 6).

Some 46.2 per cent of the respondents, who were aged between 14 and 18, also said they would be “very embarrassed” if they were diagnosed with a mental illness, while nearly a quarter (22.7 per cent) said they would not want others to know if their relative were mentally ill. A Social Experiment on Mental Health Stigma. Duke-NUS students seek to remove stigma of mental illness, Latest Singapore News.

He was having a cup of coffee with a secondary school friend last year when the friend told him he had been suffering from depression. 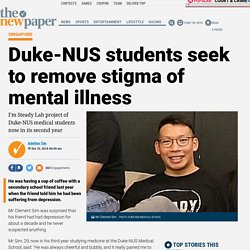 Mr Clement Sim was surprised that his friend had had depression for about a decade and he never suspected anything. Mr Sim, 29, now in his third year studying medicine at the Duke-NUS Medical School, said: "He was always cheerful and bubbly, and it really pained me to know that he was suffering in silence for the past 10 years. " Upon learning he was studying psychiatry, two more of Mr Sim's friends came forward to tell him that they were suffering from depression. This prompted Mr Sim to start I'm Steady Lah, a student-organised community service project that aims to remove the stigma associated with mental health disorders. Together with six of his schoolmates, Mr Sim started the project in June last year and held its first event last October.

The project, in its second year, is funded by Duke-NUS and a grant from the National Youth Council. Getting Help. National Healthcare Group Polyclinics. A clinical psychologist works closely with doctors, nurses and other allied health professionals to enable patients to manage and improve their mental and physical health. A clinical psychologist is qualified to provide assessment, counselling and psychotherapy for patients with stress-related problems, common mental health problems, with or without physical health conditions. A clinical psychologist also helps patients with an understanding of the factors that contribute to their problems and that maintain them.