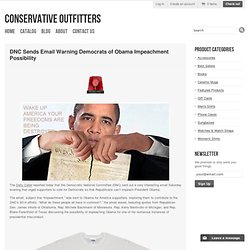 The email, subject line “Impeachment,” was sent to Obama for America supporters, imploring them to contribute to the DNC’s 2014 efforts. “What do these people all have in common? ,” the email asked, featuring quotes from Republican Sen. James Inhofe of Oklahoma, Rep. Michele Bachmann of Minnesota, Rep. The DNC email specifically talked about impeachment and claimed “Republicans are actually excited about the idea.” “Show these Republicans that they are way, way off-base, and give President Obama a Congress that has his back,” according to the DNC email, noting that Democrats need to win 17 GOP House seats to reclaim a majority. The DNC recently further expanded efforts to boycott independent news outlets who previously supported tPresident Clinton's impeachment. 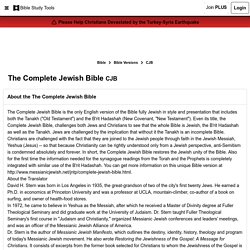 NET Bible. 1 tn The Hebrew text has the article prefixed to the noun. 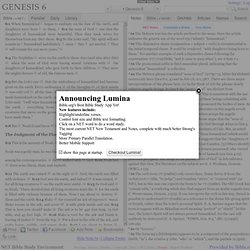 Here the article indicates the generic use of the word אָדָם (’adam): “humankind.” 2 tn This disjunctive clause (conjunction + subject + verb) is circumstantial to the initial temporal clause. It could be rendered, “with daughters being born to them.” For another example of such a disjunctive clause following the construction וַיְהִיכִּי (vayÿhiki, “and it came to pass when”), see 2 Sam 7:1. Early Christian Writings: New Testament, Apocrypha, Gnostics, Church Fathers. BibleGateway.com: A searchable online Bible in over 100 versions and 50 languages. Messiah Revealed: Index of Fulfilled Messianic Prophecies by Category. 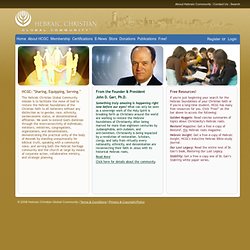 If you're just beginning your search for the Hebraic foundations of your Christian faith or if you're a long-time student, HCGC has many free resources for you. Click "Free! " on the bar above to access the following: Golden Nuggets: Read concise summaries of topics about Christianity's Hebraic roots. Restore! Hebraic Insight: Get a free e-copy of Hebraic Insight, HCGC's inductive Hebraic Bible-study journal. Our Lost Legacy: Read the entire text of Dr.

Hebraic Roots, Christianity & the Hebrew alphabet. Age of Aquarius Traits are Building as the Next Great Age Begins. By Sandra Weaver The Age of Aquarius is causing great turmoil, to make room for the new values of love, brotherhood, unity and integrity. 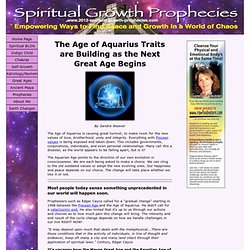 Everything with Piscean values is being exposed and taken down. This includes governments, corporations, individuals, and even personal relationships. Free Astrology Reports: Natal Chart, Compatibility, Future. Egyptian Alien Gods Returning - Steve Canada. The Mind Unleashed: Sex and Aural Energy. Pay attention to whom you share your intimate energy with.

Intimacy at this level intertwines your aural energy with the aural energy of the other person. These powerful connections, regardless of how insignificant you think they are, leave spiritual debris, particularly within people who do not practice any type of cleansing, physical, emotional or otherwise. The more you interact intimately with someone, the deeper the connection and the more of their aura is intertwined with yours.

Imagine the confused aura of someone who sleeps with multiple people and carries around these multiple energies? What they may not realize is that others can feel that energy which can repel positive energy and attract negative energy into your life. Visions of the past by rainerpetterart on deviantART. What Is Sacred Sex? « The Goddess of Sacred Sex. When we journey to our ancient past, long before a Christian god and patriarchal religions, we encounter a world where for millennia people worshipped the Goddess – benevolent, fertile and above all sexual.

Very sexual! Today we have profound difficulty associating sexuality with anything sacred, but in ancient times the worship of the goddess was often conducted through sexual rites. As the goddess once again awakens in a western consciousness, the shame and guilt traditionally attached to our bodies and sexual experiences is being replaced with a remembering of lifetimes past when deity was female and sex was for worship. Sex In The Ancient World (season1, episode1, part4/5) Sailor Moon Lingerie and PJs Coming in 2014! [Pics. These officially licensed Sailor Moon bra and panty sets and PJs will be released by women’s lingerie designer Peach John, in collaboration with Bandai. 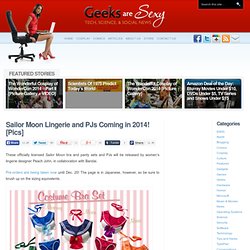 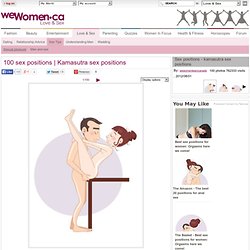