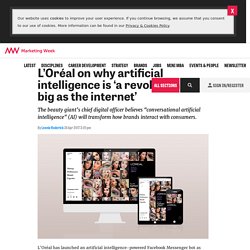 In partnership with startup Automat Technologies, the beauty giant has developed a series of beauty services that will launch in the coming months on the Facebook Messenger platform. Humans lick their wounds after losing to AI in poker - Jan. 31, 2017. The best poker player at Rivers Casino in Pittsburgh wasn't a human, but a machine. 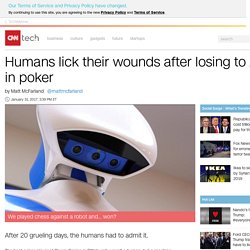 "Libratus," a computer program created by a Carnegie Mellon professor and student, dominated four professional poker players this month, accumulating a $1,766,250 lead in chips. Ola expands Ola Play services for Prime users - Livemint. What does ‘digital transformation’ really mean? The term ‘digital transformation’ has been used to describe anything from creating a fully responsive mobile website to developing a social media strategy, but in reality true transformation needs to involve much more than just the end product. 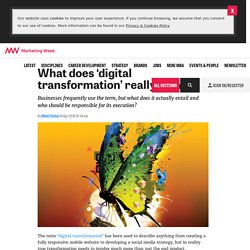 So what does this mean for brands? Whose responsibility should it be and what does a transformation project really involve? And what challenges do businesses face when adapting people and processes to new technology and shifting to a ‘digital first’ approach? As digital now permeates every part of a business, many argue that it cannot be siloed. Marketing Week columnist Mark Ritson says as digital is indeed everywhere, “it’s impossible to find an Archimedean point where digital ends and so-called ‘traditional’ channels begin”. Fwd: What does 'digital transformation' really mean? - Marketing Week. Alibaba's Jack Ma sees decades of pain as internet disrupts older economy.

Alibaba Group's chairman Jack Ma said society should prepare for decades of pain as the internet disrupts the economy. 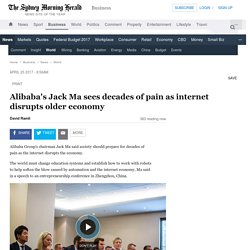 The world must change education systems and establish how to work with robots to help soften the blow caused by automation and the internet economy, Ma said in a speech to an entrepreneurship conference in Zhengzhou, China. This is a modal window. This modal can be closed by pressing the Escape key or activating the close button. Caption Settings Dialog Beginning of dialog window. Youtube. Need an Accountant? Try a Robot Instead - CFO Journal. Subscribed 2016 Opening Video. The BXT approach: Widening perspectives on digital transformation. In a business landscape rife with unsuccessful digital transformations, PwC Digital Services Leader John Riccio outlines BXT, PwC’s new framework to empower clients in embracing new technologies, agile ways of working and refocusing around customer experience design. 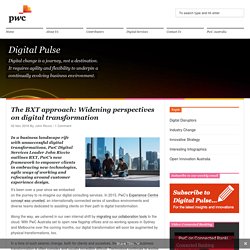 NSW offers free wi-fi for bus commuters. The NSW State Transit Authority has unveiled plans to offer free wifi for up to 50 buses on designated routes. 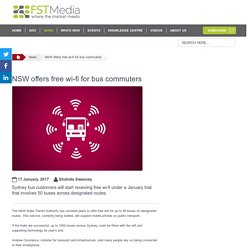 This service, currently being trialled, will support mobile phones on public transport. If the trials are successful, up to 1000 buses across Sydney could be fitted with the wifi and supporting technology by year’s end. Andrew Constance, minister for transport and infrastructure, said many people rely on being connected to their smartphone. They often use the time during a commute to catch up on news, emails and social media. Www.forbes. A year is a long time in technology, but the past 12 months has seen one of the most surprising and exciting shake-ups in recent history: Microsoft and Google have swapped places. 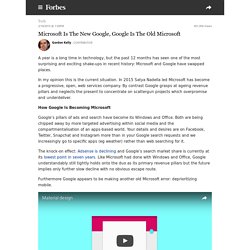 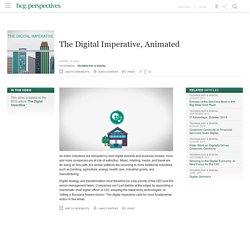 One Thing Is Certain: 2017 Will Be Year of Uncertainty for CEOs. Look Who’s Back! Microsoft, Rebooted, Emerges as a Tech Leader. Digital Twin: Bringing the Physical and Digital Worlds Closer Together - CIO Journal. America’s Dazzling Tech Boom Has a Downside: Not Enough Jobs. The Future of Work: Less is More. The way marketers work currently sits on the verge of enormous change. 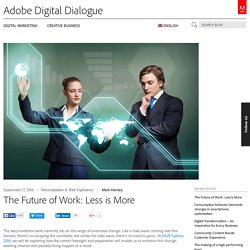 Like a tidal wave cresting over the horizon, there’s no escaping the inevitable, but unlike the tidal wave, there’s no need to panic. At DAZE Sydney 2016, we will be exploring how the correct foresight and preparation will enable us to embrace this change, working smarter and possibly living happier as a result. It seems plain that we should be prepared for a world where a considerable increase in flexibility and variability of place, type, rhythm and style of working will become normalised. This will come from a transition from highly structured hierarchies, which emerged for command and control of physical manufacturing, to one where structures are much more fluid, and depend primarily on influence and capability.

How Telemedicine Is Transforming Health Care. After years of big promises, telemedicine is finally living up to its potential. 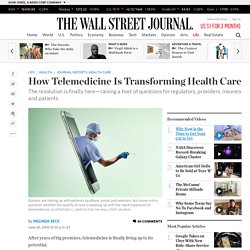 Driven by faster internet connections, ubiquitous smartphones and changing insurance standards, more health providers are turning to electronic communications to do their jobs—and it’s upending the delivery of health care. Doctors are linking up with patients by phone, email and webcam. Internet of Everything coming to change our lives. "When you wake up in the morning … you don't think, what's the killer app? You think, anything is possible," Michael Abrash, chief scientist at Facebook-owned Oculus told Bloomberg earlier this week. But before virtual reality, "we haven't ever had it so tightly coupled to our perceptual system and our environment".

Working out who can win from digital disruption is one of the biggest challenges – and the Holy Grail – for businesses, investors and governments. Goldman Sachs estimates that virtual reality, which has attracted giants including Facebook, Sony and Microsoft, will be bigger than the TV market by 2025, growing to $US182 billion ($242 billion). Internet of things paying off for more providers. The Fastest-Growing Format in Publishing: Audiobooks. Mobile Payments Will Triple in the US in 2016. The number of people in the US using their phones to pay for goods and services at the point of sale will continue to climb steadily, with 2016 being a year of significant growth for the technology.

Driverless trucks Australia: Uber effect could kill off jobs. Truck drivers, cafe staff, petrol station attendants and others who rely on the roadside economy could find themselves unemployed. IT’S one of the most exciting technological advances on the horizon, but the arrival of driverless vehicles could devastate Australia. As a nation whose economy revolves around a $200 billion transport and logistics industry, waving goodbye to truck drivers could mean far-reaching effects.

After a futuristic fleet of self-driving “smart trucks” drove across Europe from Sweden to the Netherlands earlier this month, TechCrunch predicted, “no technology will automate away more jobs — or drive more economic efficiency.” Platforms and the New Rules of Strategy - CIO Journal. 2016 Internet Trends Report. Facebook Doubles Down on Its Messenger App. The Morning Download: Tech Spending Declines Amid Shift to Digital Business - The CIO Report.

E-Commerce Boom Roils Trucking Industry. Sponsor Generated Content for Intel: Intel IoT Readiness Assessment. Nike Adds Self-Lacing Shoes to Sneaker Arms Race. The Marketer: Disrupt or be disrupted. MIT Competition Addresses Economic Dislocation in the Digital Era - The CIO Report. Nike Adds Self-Lacing Shoes to Sneaker Arms Race. Baidu to Test Drive Autonomous Cars in the U.S. Baidu Inc. BIDU 0.21 % will soon start testing autonomous cars in the U.S., part of the Chinese tech giant’s effort to introduce a commercially viable model by 2018. The move, disclosed by Baidu’s chief scientist Andrew Ng in an interview late Tuesday, is a significant step for the company, which is trying to get ahead in the race to build autonomous cars and is now calling on the resources of its Silicon Valley tech center to advance the effort.

At the same time, Baidu is advocating for better coordination with the U.S. government, which the company says is necessary to get self-driving cars on the road. Central to the push is Mr. Ng, an artificial-intelligence scientist who conducted groundbreaking research at Stanford University and at Alphabet Inc. AT&T’s Ambitious Effort to Retrain More than 100,000 Workers - The CIO Report.

LEGO engineered a remarkable turnaround of its business. How'd that happen? The Fourth Industrial Revolution: what it means and how to respond. The Digital Evolution Index. Last year, the Fletcher School of Law and Diplomacy at Tufts University published Digital Planet: Readying for the Rise of the e-Consumer. The Rise of the Platform Economy. The Digitization of the Economy. MIT just launched a new Initiative for the Digital Economy to systematically address the impact of digital technologies on business, the economy and society.

The Future of the Internet. PIP Report Future of the Internet Predictions 031114. Preparing for the Fourth Industrial Revolution - The CIO Report. Amazon’s Colorful CTO Vogels Tells Startups to ‘Go Build!’ ‘Yeah!’ Brambles push into big data with BXB Digital in chase for Internet of Things. Brambles has 500 million pallets, containers and tubs across its business, and by putting sensors in them it could deliver crucial real-time data for big customers. Could Self-Driving Cars Spell the End of Ownership? The Rise of the Platform Economy - The CIO Report. Customer Experience is the Biggest Opportunity for Growth. For Mining Chiefs, Doomsday Scenarios Could Become Reality. Navigating a World of Digital Disruption.

Make The Shift From Digital Marketing To Marketing In A Digital World. The Marketing Tech Landscape Isn't As Scary As You Think page 2. Stop Looking for Unicorns: Building Your Big Data Team page 2. The Line Between Useful and Pushy Personalization page 2. Digital Transformation Is More Than Skin Deep page 2. Designing a Better IoT page 2.