Sustainable Buildings Need to Be Smarter Buildings - LABCITIES. The value of designing and constructing more sustainable buildings is no longer in question. 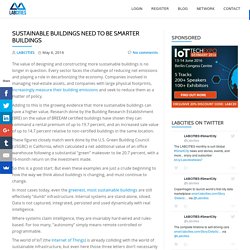 Every sector faces the challenge of reducing net emissions and playing a role in decarbonizing the economy. Companies involved in managing real-estate assets, and companies with large physical footprints, increasingly measure their building emissions and seek to reduce them as a matter of policy. Adding to this is the growing evidence that more sustainable buildings can have a higher value. Research done by the Building Research Establishment (BRE) on the value of BREEAM certified buildings have shown they can command a rental premium of up to 19.7 percent, and an increased sale value of up to 14.7 percent relative to non-certified buildings in the same location. These figures closely match work done by the U.S. So this is a good start. In most cases today, even the greenest, most sustainable buildings are still effectively “dumb” infrastructure. They don’t share data. Seeing in systems Related.

Dumb ways smart devices waste energy. If you stand on a beach and stare out towards the horizon, perhaps squinting at the sunset or the vaporous plume of a distant whale, you can see about five kilometres out. 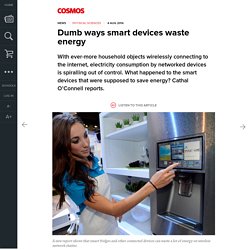 If the weather is clear, you might be looking at 50-80 square kilometres of ocean surface – a fairly large habitat by most wildlife standards. But the global ocean is actually 10 million times the size of your view out to the horizon, and on average there are more than three kilometres of water under every square metre of surface. The most extreme thing about the ocean is its sheer, inconceivable size. In that enormous volume – the biggest habitat on Earth – lives a kaleidoscope of animals, plants, microbes, and viruses. Indeed, the ocean nurtures the most fascinating and unique creatures in the natural world. But extreme life thrives in the oceans – whether through speed or guile or infrared vision, by dint of marvellous specialised adaptations. 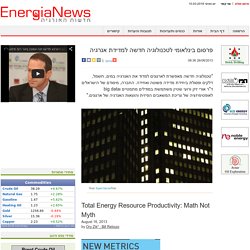 החברה, מיסודם של הישראלים ד"ר אורי זיק ורועי שטיין משתמשת במודלים מתמטיים וbig data לאופטימיזציה של צריכת המשאבים הפיזית והוצאות האנרגיה של ארגונים. " Total Energy Resource Productivity: Math Not Myth August 16, 2013 by Ory Zik* , Bill Rebozo Open the news in the US and you hear two conflicting messages: “We are on our way to becoming energy independent using fossil fuel” and “The biggest challenge we face is getting off fossil fuel.” The inconvenient truth is that we don’t know how to quantify our dependence on fossil fuel nor do we have a metric for Energy Productivity and Environmental Performance.

To see this, run a simple experiment. First, existing environmental metrics, specifically carbon, do not appeal to executives. Second, direct consumption measurements such as kWh, therms, kgals, btu's, etc. are difficult to use strategically because they are not directly comparable. Ori zik* Every Time You Shower, This Gadget Makes Energy From The Extra Heat. A few years ago, an engineer was taking a shower and started looking at the water going down the drain and wondering how much energy was going with it. 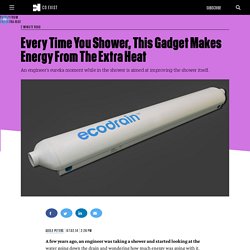 The answer, it turned out, was pretty large: after heating and cooling, hot water uses more energy than anything else in the typical home, and 80-90% of that energy is wasted seconds after the water flows out of the showerhead. What if the heat could be recaptured to keep the shower hot? After working with a team on 4,700 different experiments and iterations, engineer David Velan had a new design that worked—a device that pulls heat from water as it flows out and transfers it back into the clean water to warm it up. Since the product is double-walled, the dirty water is fully separated; only the heat is transferred, helping recover about 45% of the energy that would have otherwise gone down the drain.

It wasn't the first time that someone had tried do something similar, but it might be the first to do it in a way that's really practical. Enhanced EnergyPoints SaaS lets users set goals for energy, emissions, cost on normalized basis - FMLink. By Brianna Crandall — December 20, 2013—Energy Points Inc., a Boston-based source-to-site energy resource analytics company, recently announced significant enhancements to its EnergyPoints Analytics software-as-a-service (SaaS) platform, including the ability to enable users to set and track energy-, emissions- and cost-reduction goals on a user-defined, normalized basis. 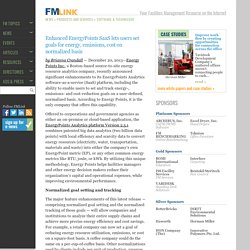 According to Energy Points, it is the only company that offers this capability. Offered to corporations and government agencies as either an on-premise or cloud-based application, the EnergyPoints Analytics platform Version 2.5.1 combines patented big data analytics (two billion data points) with local efficiency and scarcity data to convert energy resources (electricity, water, transportation, materials and waste) into either the company’s own EnergyPoint metric (EP), or any other common energy metrics like BTU, joule, or kWh.