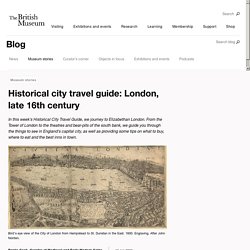 Dunstan in the East. 1600. Engraving. After John Norden. Location London sits in the fertile south-east of England at an ancient crossing point of the River Thames. London is currently the largest city in the country by a huge margin, with a population heading towards 200,000 (probably ten times the population of its nearest rivals – Norwich, Bristol and York), and this dominance has been the case pretty much from the time the kingdom of England itself came into being in the 11th century.

When to visit The climate is temperate and liveable throughout the year, even in the Little Ice Age. The best time to visit is probably autumn or spring – the court and players are back and plague retreats. Getting there Foreign visitors and people from the east and south coast will likely arrive by ship and disembark downriver at Greenwich or come up to the port itself.

Getting around Where to stay Things to do. Thomas Nashe - Wikipedia. Thomas Nashe (baptised November 1567 – c. 1601) is considered the greatest of the English Elizabethan pamphleteers.[1]:5 He was a playwright, poet, and satirist. 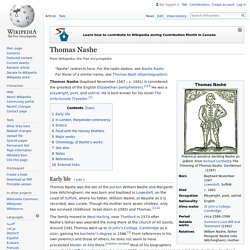 He is best known for his novel The Unfortunate Traveller.[2] Early life[edit] John Lyly - Wikipedia. Title page of Euphues, the book that launched Lily's writing career. 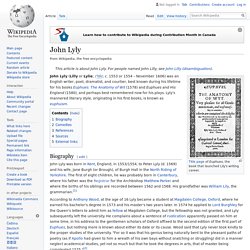 John Lyly (Lilly or Lylie; /ˈlɪli/; c. 1553 or 1554 – November 1606) was an English writer, poet, dramatist, and courtier, best known during his lifetime for his books Euphues: The Anatomy of Wit (1578) and Euphues and His England (1580), and perhaps best remembered now for his plays. Lyly's mannered literary style, originating in his first books, is known as euphuism. Biography[edit] For a time Lyly was the most successful and fashionable of English writers, hailed as the author of "a new English", as a "raffineur de l'Anglois"; and, as Edward Blount, the editor of his plays, wrote in 1632, "that beautie in court which could not parley Euphuism was as little regarded as she which nowe there speakes not French".

About the same time he probably made his first petition to Queen Elizabeth. In the second petition of 1593, Lyly wrote "Thirteen yeres your highnes servant but yet nothing. Comedies[edit] References[edit] Elizabethan Theatre. Print of William Shakespeare by Samuel Cousins, 1849. 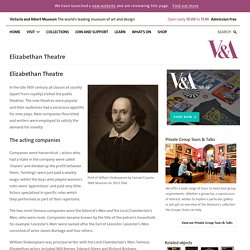 Museum no. DYCE.3164 In the late 16th century all classes of society (apart from royalty) visited the public theatres. The new theatres were popular and their audiences had a voracious appetite for new plays. New companies flourished and writers were employed to satisfy the demand for novelty. The acting companies Companies were hierarchical – actors who had a stake in the company were called 'sharers' and divided up the profit between them; 'hirelings' were just paid a weekly wage, whilst the boys who played women's roles were 'apprentices' and paid very little. Elizabethan Theatre. Elizabethan theatre and the name of William Shakespeare are inextricably bound together, yet there were others writing plays at the same time as the bard of Avon. 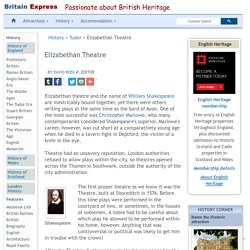 One of the most successful was Christopher Marlowe, who many contemporaries considered Shakespeare's superior. Marlowe's career, however, was cut short at a comparatively young age when he died in a tavern fight in Deptford, the victim of a knife in the eye. Theatre had an unsavory reputation. ELIZABETHAN THEATRE. The Elizabethan Era Theaters in England,Stages,Amphitheaters,inn-yards and playhouses. It was said to be grandiose and extravagant like most part of Elizabethan aristocratic culture. 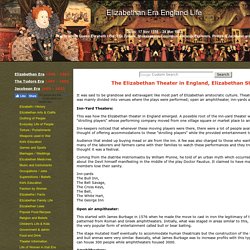 Theater in Elizabethan England was mainly divided into venues where the plays were performed; open air amphitheater, inn-yards and playhouses. Inn-Yard Theaters: This was how the Elizabethan theater in England emerged. A possible root of the inn-yard theater were the so-called "strolling players" whose performing company moved from one village square or market place to another. Inn-keepers noticed that whenever these moving players were there, there were a lot of people availing their services so they thought of offering accommodations to these "strolling players" while the provided entertainment to the audience. Audience that ended up buying mead or ale from the inn. Coming from the diatribe Histriomastix by William Prynne, he told of an urban myth which occurred in an inn-yard theater, about the Devil himself manifesting in the middle of the play Doctor Faustus.

Open air ampitheater: Elizabethan Literature,Elizabethan Era Literature,Writers,Plays,Dramas. It goes without saying that the Elizabethan literature was some of the most awe inspiring arts ever done. 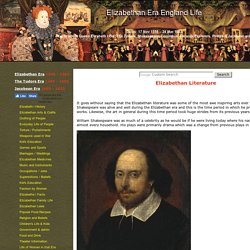 William Shakespeare was alive and well during the Elizabethan era and this is the time period in which he produced his most popular works. Likewise, the art in general during this time period took huge strides from its previous years. William Shakespeare was as much of a celebrity as he would be if he were living today where his name is recognizable in almost every household. His plays were primarily drama which was a change from previous plays in former eras of England. In former eras you would have typically found plays and literature that was dominated by religious influence.