L’Arctique se réchauffe depuis plus longtemps que ce que l’on croyait – Regard sur l'Arctique. How One Inuit Sculpture Links Two Very Different Parts of the World. I look at Inuit art every day and when I saw this sculpture by Tutuyea Ikkidluak (1962–1989) I was immediately struck by its uniqueness. 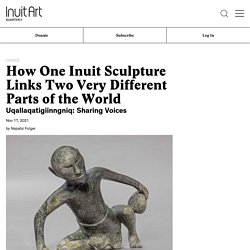 A thin, bald man with nothing but a cloth wrapped around his waist is not typical among the fur-clad hunters, braided mothers and transforming animalian spirits of Inuit lore. When I looked closer at the details of the artwork and saw the title Starving Ethiopian, I thought, “This must have been made in the ’80s,” and vividly remembered the imagery of starving people in commercials on TV when I was growing up.

When Ethiopia was hit by a devastating famine that lasted from 1983–1985 and affected Ethiopian people for decades, we only had a few channels in the North and international aid commercials are one of the things I remember—outside of watching my favourite cartoons and Takuginai. I didn’t realize how widely that kind of aid campaigning really affected Inuit across Inuit Nunangat until I saw this piece. Halladas en el hielo siberiano momias de un adulto y un bebé de hace 1.200 años envueltas en cobre, pieles y corteza de abedul. How Jessie Oonark Turned Qamani’tuaq Into a Hub for Inuit Art.

Le qulliq, lampe traditionnelle inuit qui a marqué l’assermentation du nouveau Conseil des ministres canadiens – Regard sur l'Arctique. Kenojuak Ashevak. In Russia's Far North, a Lone Group of Neanderthals May Have Been the Last of Their Kind. For some 200,000 years, Homo sapiens and Neanderthals coexisted on Earth. 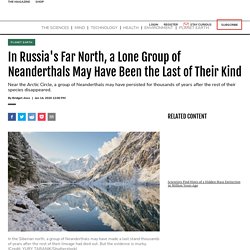 Histoire des Inuits. Inside the Mind of “Tattooed Woman” This sculpture, Tattooed Woman (c.1965), looks as though it would weigh a ton. 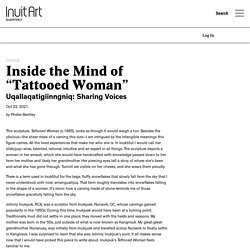 Besides the obvious—the sheer mass of a carving this size—I am intrigued by the intangible meanings this figure carries. All the lived experiences that make her who she is. In Inuktitut I would call her silatujuq—wise, talented, rational, intuitive and an expert in all things. The sculpture depicts a woman in her amauti, which she would have handcrafted with knowledge passed down to her from her mother and likely her grandmother. Her piercing eyes tell a story of where she’s been and what she has gone through.

Previously Unpublished Photos of Indigenous Culture in Alaska Circa 1927. In 1927, photographer and ethnologist Edward S. 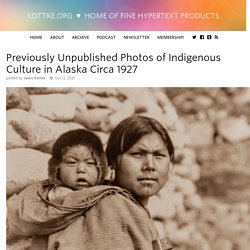 Curtis travelled to the US territory of Alaska to photograph indigenous peoples and their cultures for his seminal work, The North American Indian. Some of the photos he took in Alaska were never published and make up a new exhibition at the Muskegon Museum of Art, Edward S. Curtis: Unpublished Alaska, The Lost Photographs. La chanteuse inuk Akinisie Sivuarapik remporte le prix de l’Artiste de l’année au Nord-du-Québec – Regard sur l'Arctique. Sobey-nominated Inuk artist honours a polar bear in new National Gallery exhibit. Reviews and recommendations are unbiased and products are independently selected. 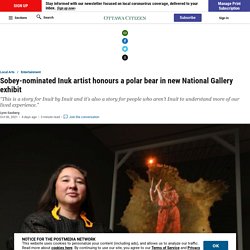 Postmedia may earn an affiliate commission from purchases made through links on this page. Article content. Lire les habitudes d’un peuple inuit dans des « archives » aquatiques. How Did Kananginak Pootoogook Help Open Kinngait’s First Print Shop? This Portfolio tells stories about the founding of Canadian Arctic artist co-operatives with a focus on the contributions of the Inuit involved. 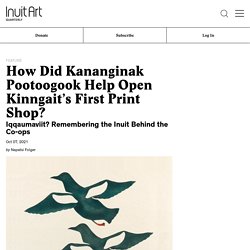 Examining the roles of hard-working local Inuit artists like Kananginak Pootoogook, RCA, Jeannie Snowball, Levi Qumaluk, Jessie Oonark, CM, RCA and Helen Kalvak, CM, RCA, who were essential in establishing and maintaining artist co-operatives across the Canadian Arctic. Historically non-Inuit have been celebrated almost exclusively for the establishment and upkeep of Inuit artist co-operatives. L’histoire de Niap, artiste visuelle Inuk – Regard sur l'Arctique. How Tim Pitsiulak’s Work is Connected to the Land. This Eerie Whale Bone Alley in Siberia Was Erected By Natives a Long Time Ago and We Are Only Guessing Why - Earthly Mission. A stretch on the northern tip on remote Yttygran Island in Siberia has become a macabre kind of tourist destination, and it’s easy to see why. 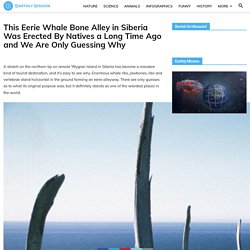 Enormous whale ribs, jawbones, ribs and vertebrae stand horizontal in the ground forming an eerie alleyway. There are only guesses as to what its original purpose was, but it definitely stands as one of the weirdest places in the world. Consisting of hundreds of whale bones, mainly jawbones, ribs, and vertebrae, Whale Bone Alley is thought to have been created in the fourteenth or fifteenth century by a cooperative group of native Inuit tribes.

Many of the bones (some in excess of five metres high and weighing 300 kg) were placed in excessive rows along the shore giving the site its evocative name. The overall effect is that of a haunting titan’s boneyard. An Ancient Inuit Maskette. Hallan un “mundo subterráneo” con cañones, montañas y lagos bajo la capa de hielo de Groenlandia.

ANTArCTICA. INUIT. Arctique. Lunch arrives on Wrangel Island, and 230 polar bears show up for the feast. Just like a flock of sheep, more than 200 bears gather for a feast on the Wrangel Island. 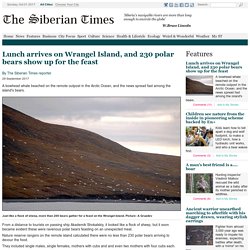 Picture: A Gruzdev From a distance to tourists on passing ship Akademik Shokalskiy, it looked like a flock of sheep, but it soon became evident these were ravenous polar bears feasting on an unexpected meal. The Story Behind the Siberian Ice Maiden and Her Tattoos. Here There Be Monsters. It’s never a good idea to play alone near the edge of the ice. 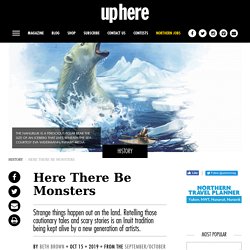 Danger lurks in the waters below, where stories tell of a scaly sort, creatures with a pouch on their back. Tap, tap, tap, you might hear them tease from underneath the ice—beings that catch lone hunters and lost children. The qallupilluit. Tales of the ocean dwellers, dressed in eider feathers and reeking of sulfur, are known well in the eastern Arctic where communities are settled near the sea. Communities like Clyde River, where Louise Flaherty is from. Boréales 2017 : les premiers auteurs confirmés ! Teri Rofkar, innovative Tlingit weaver, dies at 60 - KCAW. L'Allée des baleines - Le blog de glace - Grand Nord Grand Large. Native American Masks of the Northwest Coast and Alaska. Eagle mask, Makah, Northwest Coast 1 of 23 Humanoid mask, Kwakwaka’wakw(?) 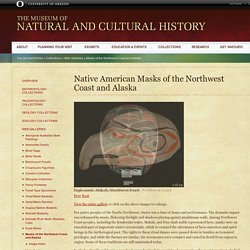 , Northwest Coast 2 of 23. Alaska Native Art. Alaska is famous for the rugged beauty of its mountains, rivers, and coastlines, as well as for the distinctive arts and crafts produced by Alaska Native artists. If you are considering purchasing an Alaska Native-made art or craft item, it's smart to invest a little time learning about the processes and materials Alaska Natives may use to make these unique and beautiful objects.

Identifying Arts and Crafts Made by Alaska Natives. Gretchen Sagan.