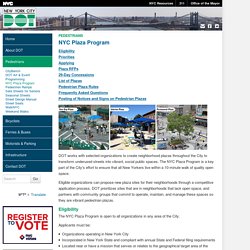 The NYC Plaza Program is a key part of the City's effort to ensure that all New Yorkers live within a 10-minute walk of quality open space. Eligible organizations can propose new plaza sites for their neighborhoods through a competitive application process. DOT prioritizes sites that are in neighborhoods that lack open space, and partners with community groups that commit to operate, maintain, and manage these spaces so they are vibrant pedestrian plazas. Eligibility The NYC Plaza Program is open to all organizations in any area of the City. Applicants must be: Organizations operating in New York City Incorporated in New York State and compliant with annual State and Federal filing requirements Located near or have a mission that serves or relates to the geographical target area of the proposed plaza Responsibilities Community Outreach No.

How to Make a Wildflower Bomb. “You can throw them out of a moving car, from a bicycle, on a hike,” says Daniel Cunningham, a horticulturist at Texas A&M, who has conducted preliminary trials on bomb-making techniques that lead to higher rates of seed germination. 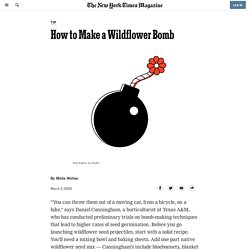 Before you go launching wildflower seed projectiles, start with a solid recipe. You’ll need a mixing bowl and baking sheets. Add one part native wildflower seed mix — Cunningham’s include bluebonnets, blanket flowers and native grasses, but yours should reflect what grows endemic to your region — to four parts powdered clay and five parts fine-grained compost. Mix the dry ingredients thoroughly and stir in water slowly until you have a thick, bread-dough-like consistency. EcoQuest Challenge » New York Botanical Garden.

June is for Juneberry - June 2019 Juneberry (Amelanchier spp.), also known as Shadbush and Serviceberry, is a small, taxonomically complicated genus comprising about 20 species in Europe, Asia, and North America (where its greatest global diversity is found). 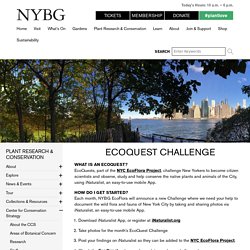 In this month’s EcoQuest Challenge, help NYBG document as many Juneberry plants as possible by June 30. Five of the eight species in the northeastern U.S. occur in New York City as do common cultivars such as Amelanchier ×grandiflora ‘Autumn Brilliance’ (pictured). Amelanchier nantucketensis may be extirpated from the City and members of the Amelanchier alnifolia complex are uncommon. #plantlove » New York Botanical Garden. Street Tree Planting. 14 Beautiful Spots to Escape to Nature in New York City. Every time I visit New York City, I find myself completely energized by the pace and whir of activity—even with my usual 5:30 AM wake up call to catch a bus there. 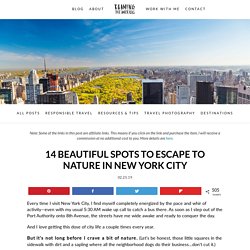 As soon as I step out of the Port Authority onto 8th Avenue, the streets have me wide awake and ready to conquer the day. And I love getting this dose of city life a couple times every year. But it’s not long before I crave a bit of nature. (Let’s be honest, those little squares in the sidewalk with dirt and a sapling where all the neighborhood dogs do their business…don’t cut it.) Despite being dubbed the concrete jungle, New York City has a surprising amount of places to enjoy nature. But there are plenty of other green spaces throughout the city that provide a soothing departure to nature. So if you’re wondering where to enjoy nature in New York City, keep reading for 14 ideas that are sure to inspire you to head outside! Even in the concrete jungle, there's an insane amount of green space where you can enjoy nature. 1. 2. How Green Could New York Be? Michael Sorkin, a globe-trotting sixty-six-year-old architect, urban planner, and critic, has published fourteen books and has designed buildings and public spaces from the Rockaways to Abu Dhabi. 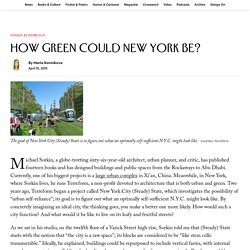 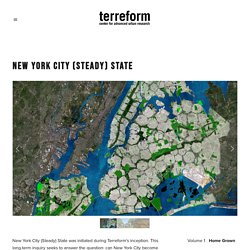 This long-term inquiry seeks to answer the question: can New York City become self-sufficient within its political boundaries? Intended to be an alternative master plan for the city’s future, this study investigates the possibility for urban self-reliance in such areas as food, energy, waste, water, air supply and quality, manufacture, employment, culture, health, and transport. The predicate of the study lies both in questions of the limits of sustainability and in response to the failures of democratic autonomy within an increasingly globalized economy.

It aims to produce more than a dramatic new plan for the future of New York; it seeks to compile an inventory of best practices that are relevant to cities around the world.